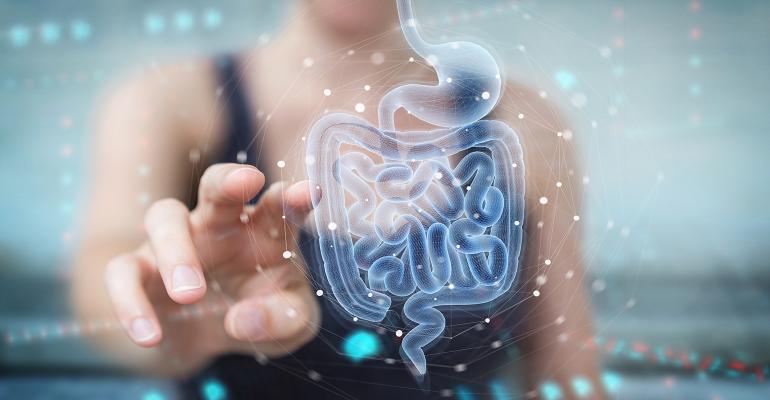 FC measurement is suitable for children to circumvent unpleasant endoscopies.

Faecal calprotectin (FC) is a sensitive marker of intestinal inflammation and is an important test for differentiating chronic inflammatory bowel diseases (IBD) from functional gut disorders such as irritable bowel syndrome (IBS). The FC level correlates with IBD activity and is, therefore, also suitable for monitoring the effectiveness of a treatment regime and for assessing the risk of relapses. Use of this non-invasive test in a routine setting can significantly reduce the total number of endoscopies performed. FC can be measured quickly and efficiently in patient stool samples using ELISA.

Patients with abdominal pain or diarrhoea represent a large proportion of cases for gastroenterologists. The causes of these symptoms include IBD, such as Crohn’s disease (CD) and ulcerative colitis (UC), and functional disorders such as IBS. It is not possible to differentiate between IBD and IBS based on symptoms alone. In order to obtain a definitive diagnosis, the inflammatory status of the intestinal epithelium is investigated using invasive imaging methods such as endoscopy. These procedures are, however, costly and unpleasant for patients. Moreover, more than half of adult and up to 70 per cent of paediatric patients presenting with symptoms suggesting IBD are endoscopically inconspicuous. Measurement of inflammation-associated biomarkers in faeces represents a cost-effective and non-invasive alternative for differentiating inflammatory from non-inflammatory conditions.

When the gastrointestinal tract is inflamed, neutrophile granulocytes migrate through the intestinal mucosa into the lumen and secrete calprotectin. This stimulates the immune response and has an antimicrobial effect. The calprotectin secreted into the intestinal lumen accumulates in faeces and is released with it. FC can, therefore, be used as a marker for inflammatory processes that affect only the gastrointestinal tract. Its concentration is proportional to the degree of inflammation. FC is more effective for IBD diagnostics than clinical indices and classical serological markers, such as erythrocyte sedimentation rate (ESR), C-reactive protein (CRP) or leukocyte count. Moreover, calprotectin is produced at the start of the disease, and its determination supports the early diagnosis. Measurement of FC is especially suitable for differentiating IBD from IBS. Various studies have shown a sensitivity of 83 to 95 per cent and a specificity of 84 to 91 per cent for differentiating IBD from IBS in adults. In children, the sensitivity is high (98 per cent) at a lower specificity (68 per cent).

An FC concentration of less than 50 µg/g is considered inconspicuous and excludes an inflammatory cause of gastrointestinal complaints with high certainty. Values between 50 and 120 µg/g lie in the borderline range and further monitoring of patients is indicated, for example, by measuring FC again after two to three weeks. When the FC concentration is greater than 120 µg/g, the inflammatory status of the intestinal epithelium should be examined using imaging methods. Using FC levels to select patients for endoscopy can reduce the total number of endoscopies performed by about two-thirds.

Related: Reliable serological testing in measles and other vaccine-preventable diseases

FC measurement is especially suitable for children, to circumvent unpleasant and unnecessary endoscopies. In children older than four years, the normal range corresponds to that of adults. In infants under six months, the FC normal values are distinctly higher (median values 218 to 538 µg/g depending on the study) and subsequently decline with increasing age. In cases of IBD in infants, the FC levels nevertheless correlate with the disease severity. However, due to the lack of an established cut-off, the use of the biomarker in children under four is limited.

IBD are episodic diseases, with symptomatic phases alternating with periods of remission. The aim of treatment is to reduce inflammation and relieve symptoms. However, there is no cure. Since FC correlates with the inflammatory activity, it is a suitable surrogate marker for assessing the disease activity in IBD patients. A multitude of studies have shown that FC is effective for predicting relapses in IBD patients in drug-induced remission after withdrawal of the medication. The risk of a relapse is proportional to the measured FC value. Long-lasting remission is associated with a low FC concentration (Figure 1). It is advisable to continually monitor the FC level at regular intervals even during remission phases. When the FC value is elevated, further examinations and therapy adjustments are recommended. The normalisation of the FC value correlates with the reduction in the inflammation of the intestinal mucosa (mucosal healing).

Many CD patients require surgery to remove affected intestinal sections. However, up to 80 per cent of patients experience recurrence of inflammation and clinical relapse after ileocoecal resection. High FC levels are associated with ongoing inflammation after surgery and a greater risk of relapse. Thus, FC is also useful as a risk marker for postoperative recurrence. FC has a higher correlation with the probability and severity of a relapse than CRP and the Crohn’s Disease Activity Index (CDAI).

Current international guidelines for IBD diagnostics recommend measuring FC in the differential diagnosis of IBD and IBS (Table 1). Moreover, the guidelines highlight the good correlation between the FC concentration and disease activity.

Calprotectin can be measured quickly and efficiently in stool samples using ELISA. The EUROIMMUN Calprotectin ELISA, for example, is based on microplates coated with anti-calprotectin antibodies which are incubated with patient samples. The assay takes just 75 minutes and can be performed manually or automatically.

The preanalytical sample preparation can be reduced to a minimum through the use of special stool dosage tubes. These enable extraction of a defined amount of stool in just one step, circumventing the need for time-consuming manual weighing and extraction of stool samples. After a centrifugation step no further decanting is necessary. The extraction with the stool dosage tube correlates very well with the manual extraction procedure.

The ELISA has a broad measurement range of 1.9 to 2100 µg/g. Calprotectin values below 50 µg/g can be considered as negative. However, each laboratory should establish its own normal values based on its specific ambient conditions.

In a clinical study, stool samples from 47 clinically characterised patients with IBD (n=22) or IBS (n=25) were investigated with the Calprotectin ELISA from EUROIMMUN (Figure 2). Excluding samples in the borderline range, the sensitivity of the test amounted to 94.1 per cent and the specificity to 95.5 per cent. Thus, there was a very high correlation between the FC level and the clinical diagnosis.

Differentiation of CD and UC by autoantibody detection

Laboratory tests play an important role in the diagnosis of IBD. In recent years, FC has become an established biomarker for differentiating IBD from IBS and for monitoring IBD patients, while serological detection of different antibodies supports the differentiation between CD and UC. Testing for these biomarkers can avoid invasive and painful endoscopies for the patient. In particular, during the diagnostic workup, only patients with elevated FC need to be referred for further invasive tests. In patients with low FC levels, IBD can be virtually excluded. This is especially relevant given the much higher prevalence of IBS (10-20 per cent) compared to IBD (around 0.4 per cent). In IBD patients, FC measurement can guide therapy decision-making without the need for time-consuming and expensive endoscopies. FC is typically high during flare-ups and lower during remission. In the future, it is anticipated that FC will gain in importance for gastroenterological differential diagnostics and patient management.

This article appears in the latest issue of Omnia Health Magazine. Read the full issue online today, covering cybersecurity in healthcare, the ongoing rise of telehealth and much more.