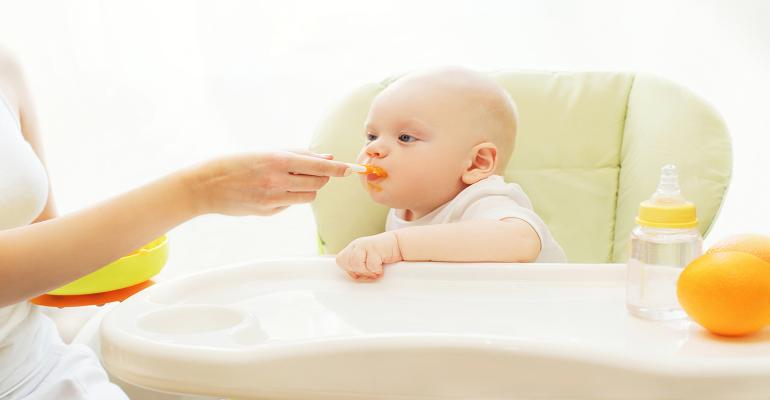 Allergies are on the rise worldwide, especially in children. Since allergic reactions to food can in some cases induce severe or even fatal reactions, it is imperative to identify the exact triggers of the allergy symptoms. Specific IgE (sIgE) multiparameter tests are particularly beneficial in allergy diagnostics, as they yield detailed sensitisation profiles for minimal effort and from only a small blood sample. Molecular allergy diagnostics based on defined components of allergen sources such as milk, egg or peanut provide precise identification of the allergy-causing proteins, which facilitates risk assessment and dietary planning, thus improving patient management. In cases of reactions to peanut, molecular allergy diagnostics enable the critical differentiation between true peanut allergy and pollen-associated cross-reactions.

Food allergies in children cause a variety of symptoms affecting different organ systems, such as the skin, gastrointestinal tract and cardiovascular system. They are, moreover, the most common cause of anaphylaxis. Up to 20 per cent of children are suspected to have a food allergy, but only 4 per cent of cases are actually confirmed by means of an oral provocation test. The most common triggers of food allergy are cow’s milk, chicken egg, peanut, nuts, soy, wheat, fish and shellfish.

The diagnostic procedure in suspected paediatric food allergies is based on anamnesis, followed by in vitro determination of specific IgE. Subsequently, a monitored oral provocation test is performed to confirm the agreement between the laboratory results and the clinical symptoms. Skin prick tests are no longer performed in children.

Specific IgE against different foods can be determined using test systems based on food extracts or defined components thereof. Extract-based tests are useful for broad screening for allergies against many different foods. Component-based tests provide in-depth analysis of the allergy-causing proteins and allow differentiation of reactions against high-risk components and low-risk components. This enables a more precise evaluation of the risk of severe reactions and the potential outcome of a provocation test, as well as the likelihood of tolerance development. It also aids dietary counselling. For example, patients who react to heat-labile components may tolerate cooked or processed forms of the food. The structural similarity of the allergy-triggering components within protein families can also give an indication of possible cross-reactions to other foods and/or tree or grass pollens.

Allergy to milk from cows (Bos domesticus) is the most frequent food allergy in infants and toddlers, occurring with a prevalence of 2 per cent. Symptoms include atopic dermatitis, urticaria, gastrointestinal complaints, asthma and anaphylaxis. Spontaneous tolerance develops in around 80 per cent of cases between the ages of two and five years. The main allergenic proteins in milk are casein (Bos d 8), alpha-lactalbumin (Bos d 4), beta-lactoglobulin (Bos d 5), lactoferrin (Bos d LTF) and serum albumin (Bos d 6).

Casein is a major allergen and is heat-stable. Therefore, patients who react to casein must avoid all forms of milk and dairy products, both raw and cooked. High titers of specific IgE against casein indicate a persisting sensitisation. Cross-reactions with goat’s and sheep’s milk are possible in these cases.

The other four components are heat-labile. Thus, patients who react to these proteins may tolerate some forms of cow’s milk, for example in cooked or baked foods. Reactions to alpha-lactalbumin indicate possible tolerance development. Serum albumin is present in beef and is also used in some cell-based immunotherapies, so reactions against these sources are also possible in sensitised individuals.

Sensitisation to eggs from chicken (Gallus domesticus) is the second most common food allergy in infants and toddlers, occurring with a prevalence of 1.5 to 2 per cent. Symptoms are similar to those of milk allergy and there is a 70 per cent likelihood of spontaneous tolerance development between the ages of two and five. The most relevant allergen components are contained in the egg white, but avoidance of the complete egg is recommended due to the risk of cross-contamination between the white and the yolk. Allergenic proteins include ovomucoid (Gal d 1), ovalbumin (Gal d 2), conalbumin (Gal d 3) and lysozyme (Gal d 4).

Ovomucoid has a high allergenic potential and is heat-stable. Patients reacting to this protein must avoid all products containing raw or cooked eggs. High titers of specific IgE against ovomucoid indicate a persisting sensitisation.

The other three components are heat-labile. Patients with reactions against these proteins may, therefore, tolerate sufficiently heated egg. Ovalbumin is a component of certain vaccines, and lysozyme is contained in some pharmaceutical products as a preservative agent, so sensitised persons may also react to these medications.

Allergy to peanut (Arachis hypogea) is the most frequent cause of food-mediated anaphylaxis and occurs with a prevalence of 1 to 3 per cent. The clinical symptoms depend on the sensitisation pattern to the different peanut proteins. In most cases peanut allergy persists lifelong.

Reactions to the storage proteins Ara h 1, Ara h 2, Ara h 3, Ara h 6 and Ara h 7 indicate a primary peanut allergy. These proteins are heat-stable and resistant to digestion. Patients who react to these components have a high risk of severe reactions and must strictly avoid even minimal amounts of peanut. Moreover, reactions to multiple components are associated with more severe allergies.

Specific IgE against the 2S albumins Ara h 2 and Ara h 6 is most predictive for clinical peanut allergy. A further 2S albumin, Ara h 7 (isoform Ara h 7.0201), represents a newly characterised major allergen containing unique IgE epitopes as well as epitopes that are shared with Ara h 2 and Ara h 6. Although co-sensitisations to Ara h 2, h 6 and h 7 are most common, monosensitisations have also been observed in some individuals. Therefore, analysis of reactions to all three 2S albumins is recommended to avoid missing patients.

The lipid transfer protein (Ara h 9) is also heat-stable. Reactions to this protein range from mild to severe. Allergies against this protein are common in Southern Europe.

In suspected cases of food allergies in young children a parallel analysis of the most important allergens is recommended to obtain comprehensive results in the shortest time.

Multiparameter tests, moreover, require only small amounts of serum (100 µl for 14 allergen components) compared to single-parameter testing, which is an advantage, especially in paediatric diagnostics.

The EUROLINE DPA-Dx assays are easy to perform, delivering results in less than three hours. The test strips can be processed manually or automatically on instruments such as the EUROBlotOne. Results are evaluated fully automatically according to the EAST (enzyme allergosorbent test) class system using the EUROLineScan software. 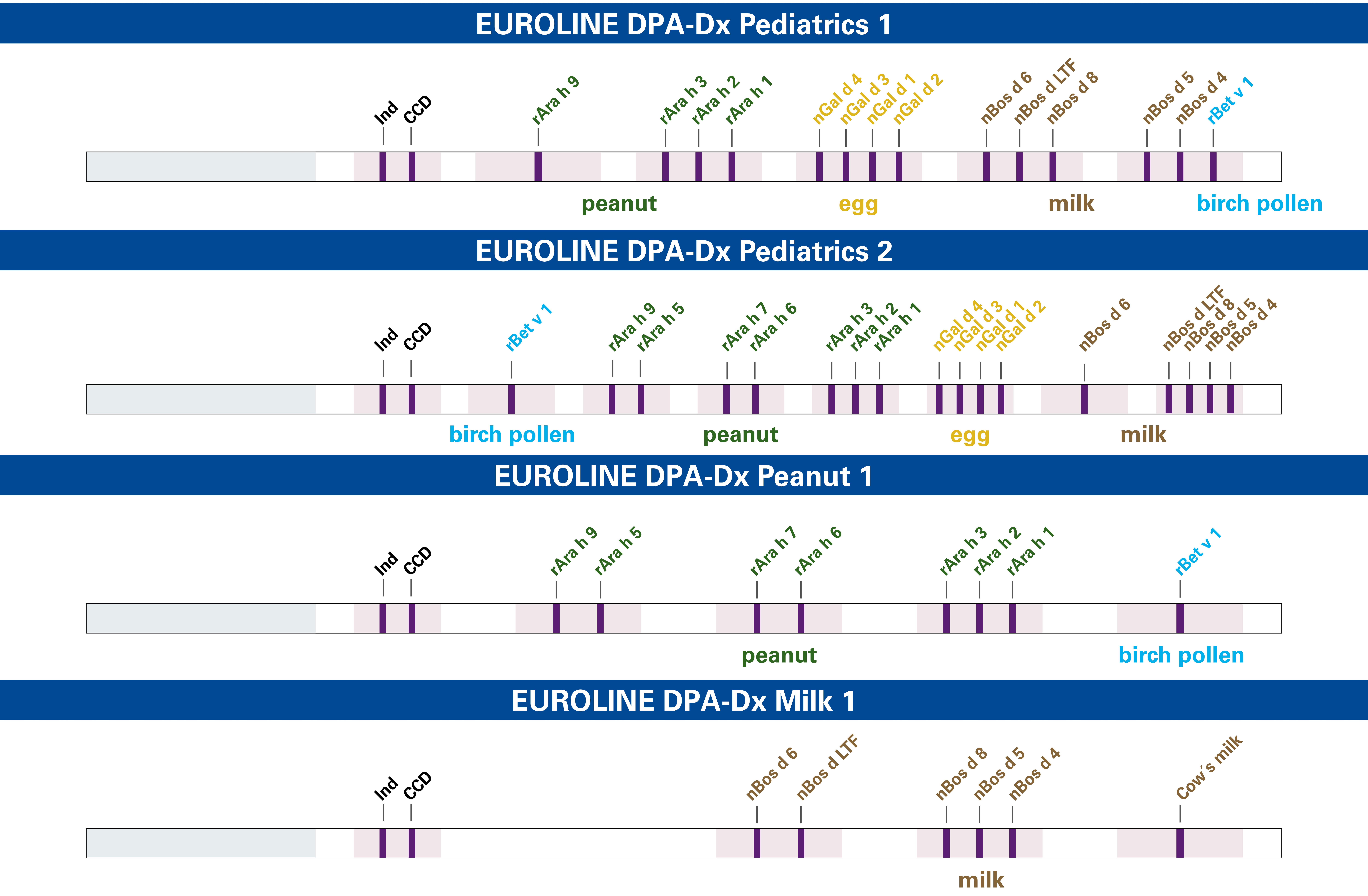 Component-resolved test systems represent the state-of-the-art in allergy diagnostics. The in-depth sensitisation profiles aid risk assessment and dietary counselling, as well as decision making on the necessity of carrying an emergency kit.

Paediatric patients benefit in particular from multiparameter analyses, which require only very small amounts of serum and deliver results quickly. As further components of allergenic foods become better characterised, the spectrum and relevance of molecular allergy tests will increase further.