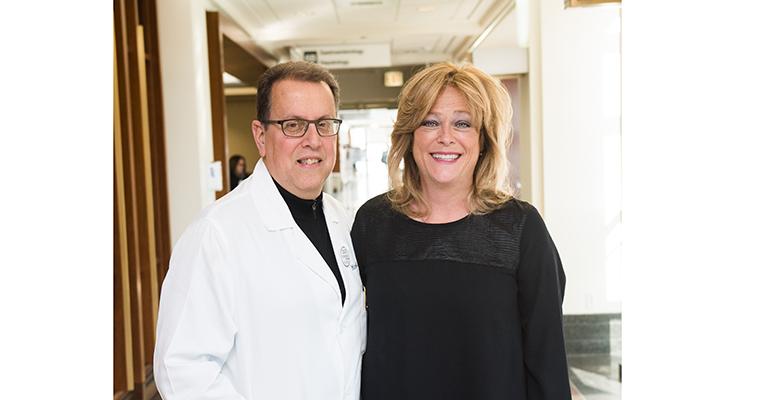 Pancreatic cancer is usually detected late, often after the disease has spread and has a poor prognosis.

Karen Bluemke spends as much time as possible these days soaking up the sun in Florida. After completing treatment for pancreatic cancer, she decided, it’s “time to finally have some fun.”

“Why wait for retirement?” said Bluemke, who is in her mid-50s. A triage nurse, she is able to work remotely from the oceanfront condo she and her husband recently purchased.

Bluemke learned she had a tumour in her pancreas in March 2016. “The first oncologist I saw painted a grim picture,” she said. She turned to the University of Chicago Medicine and surgical oncologist Mitchell C. Posner, MD, for a second opinion.

“Dr. Posner was fantastic,” she said. “He had so much experience. I went from devastated to hopeful.”

Because pancreatic cancer is usually detected late, often after the disease has spread, it has a poor prognosis.

“A pancreatic cancer diagnosis is life-defining,” said Posner, who has more than 25 years of experience in the surgical management of the disease. “Our philosophy is, that at the very least, every patient deserves hope, even when there seems to be little.”

“Karen came to us a young woman with an advanced, but treatable cancer,” he said. “We had something to offer.”

The malignant tumour was in the “head” of Bluemke’s pancreas. The cancer had spread to one lymph node and involved the portal vein, but no other organs.

After a four-month course of chemotherapy shrunk the tumour, Posner determined Bluemke qualified for surgery.

In June 2016, Posner’s team performed a Whipple procedure, the most common surgery to remove pancreatic tumours. However, only about 20 per cent of patients are candidates for the procedure based on the stage of their cancer. The University of Chicago Medicine is one of the few hospitals in the U.S. that offer the Whipple procedure using both traditional (open) and minimally invasive robot-assisted techniques.

After recovering from her surgery, Bluemke underwent another course of chemotherapy, completing treatment in December 2016.

Bluemke has been cancer-free since then, but has regular blood tests and scans to look for signs of the cancer coming back. Posner will continue to follow her.

“All my thanks go to Dr. Posner,” said Bluemke. “What a great person to be with when you get that diagnosis.”