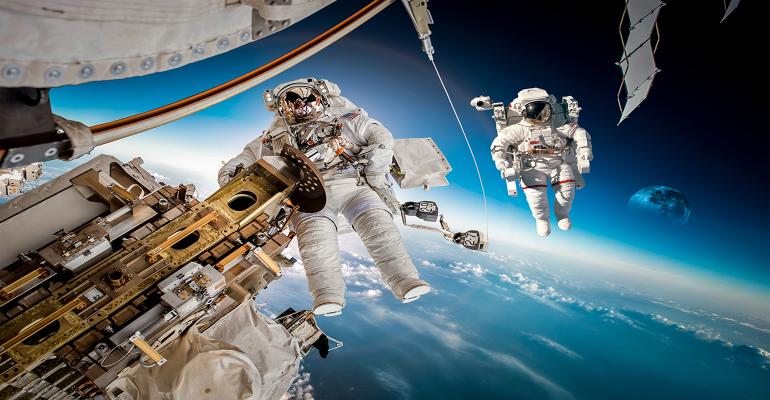 Astronauts’ bodies are affected by space exploration in numerous ways. It can cause demineralisation of bones and create muscular atrophy. In fact, the heart actually changes size, shape and function in space! Also, astronauts get exposed to some ionizing radiation as well as galactic cosmic radiation, for which there isn’t an effective countermeasure yet. In addition, there are neurologic changes, variations in sleep cycles, loss of appetite, and limited hands on deck when it comes to medical care.

Sawyer explained that in human space exploration astronauts are exposed to environments different than terrestrial life. “Some environmental changes include microgravity in spacecraft as its orbiting. We have to understand how people will function not just in microgravity but also in partial gravity especially after they have travelled months to get there. Some other worrying factors include the distance from Earth, confined spaces, limited and altered movement patterns as well as the behavioural aspects of isolation and environmental hazards. And the constant exposure to baseline danger with the awareness that at any moment there could be episodic crises that could be life-threatening.”

Some of the principles, Sawyer said, that were learnt from the space environment have been applied to people being shut in during the COVID-19 era, with the added stress and limited resources, confinement and isolation. Several astronauts have shared how they coped with these factors in space.

She highlighted that space health goals have to be looked at just like those of patients, employees, and athlete’s, to maintain optimal health and function. The aim is to predict and prevent illness and injury. The goal of TRISH, Sawyer stressed, is to empower astronauts and crew as well as Mission Control and flight surgeons to maintain their physical and behavioural health.

“For medical management at the International Space Station (ISS), it’s pretty much telemedicine,” she shared. “We have synchronous communication and if a medical condition continues to escalate there is always the option to de-orbit and bring the astronaut back to Earth quickly. But that may not be the option as we move hundreds and millions of miles further out.”

For missions to Mars, for instance, there will only be asynchronous communication, so real-time telemedicine support will not be an option neither will sending information to the cloud and having it interpreted and computed and then returned. When it comes to deep space exploration, close loop processes will be required.

“The Moon will serve as an analog for Mars just as the ISS is going to serve as an analog to our Moon missions, which we are now ramping up. By 2024, we expect to be placing a woman on the Moon on the mission called Artemis,” she added.

Continuum of care in space

Sawyer said that there has been a shift from augmented to autonomous (A2A) health and medical management. Since each astronaut has a different gene pool and has had different exposures in life, they carry with them very different risks. That’s why there is a need for a personalised or precision medicine model. Such a model will require more understanding of an astronaut before they go to space and create predictive models of who is at higher risk. Also, there is very limited space so an entire pharmacy can’t be taken. Moreover, radiation can affect the shelf life of medication.

“The goal is to create a continuum. If we start from a state of wellness and optimal function, we are trying to find ways that we can pick up on early deflections and then give a signal back to that individual that says, for instance, “you need to drink more water”, if you don’t you are going to slide down into renal insufficiency and get them back to an optimal state whether it is hydration, fatigue or nutrition or stress,” she concluded.

There seems to be a common link between patients who are at a risk for more severe illness from COVID-19. Anyone at any age is at the risk of contracting the virus but patients battling cancer, chronic diseases, obesity, and type 2 diabetes, among others, are at risk of severe illness.

According to a Lancet Diabetes & Endocrinology study mining 61 million medical records in the UK, 30 per cent of COVID-19 deaths occurred in people with diabetes. This was highlighted during the ‘Prime Movement Healthcare: Diabetes Care in a Post-COVID World’ session.

Prime Movement has partnered with the U.S. Centers for Disease Control and Prevention (CDC) for the National Diabetes Prevention Program (NDPP), a data-driven cost-effective lifestyle programme that focuses on healthy eating and physical activity to decrease the risk of developing diabetes. Reportedly, patients who successfully complete the programme have been shown to decrease their risk of developing diabetes by 58 to 71 per cent.

Another engaging session at the event was ‘When IFU’s and the real world do not align with your sterile processing practices/policies’, where panellists explained the process of how Instructions for Use (IFU) are developed.

Damien Berg, Regional Manager Sterile Processing – UCHealth. Said: “The life of an IFU starts when a manufacturer comes up with a concept but then they have to prove how that product is used and cleaned, inspected, assembled/disassembled, sterilised, how it is wrapped and containerised and how it is stored. The manufacturer has to think about all this and prove to the regulatory agency that this can be reproduced in the field.”

Berg stressed that in the past this has been challenging because IFU’s were validated based off of manufacturers proving this can be done but not in a hospital setting but, in a laboratory setting or a simulated environment. “Sometimes end-users can struggle with that. That’s one of the things manufacturers around the globe are working on, to develop IFU’s in a real-world hospital or clinic settings,” he added.

While Arthur Henderson, Senior Clinical Education Specialist, South Eastern Zone, STERIS Corporation, emphasised that there are different criteria for reprocessing. These include labelling, which reflects the intended use of the device. It should also feature reprocessing instructions, which advise users to thoroughly clean the device. These should be technically feasible and include devices and accessories that are legally marketed and be comprehensive.

Henderson said: “With the microbial process, there is sometimes a confusion such as what kind of lubrication agents need to be used, is visual inspection needed? What type of method of sterilisation needs to be carried out? What about the reuse life? One of the trends we have seen is that manufacturers are writing work instructions, which is based on IFU. When work instructions are written it is a much easier way for the end-user to understand what is being asked of them. “

“As an infection preventionist, we are trying to do the right thing but sometimes the IFU’s give too much information, which makes it almost impossible to follow,” added Jill Holdsworth, Manager, Infection Prevention - Emory University Hospital Midtown. “But sometimes the IFU’s don’t give enough information. That’s why IFU’s are a hot topic right now to make sure we are doing things safely and correctly and in the right way.”

Another challenge, Berg said, is that manufacturer’s need to make products for a global audience. Therefore, there has to be a consensus to develop standardised IFU’s.