Lockdown impact on market supply of medical equipment in China 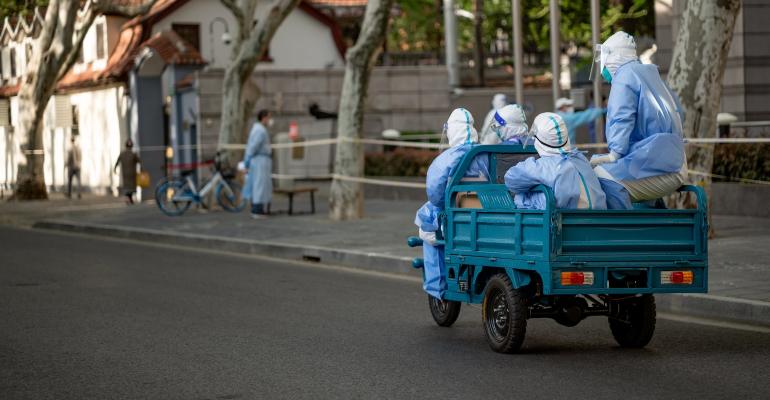 Medical manufacturing in Shanghai and China fell by 45 per cent and 3.8 per cent, respectively, according to Omdia analyst Sally Ye.

Since March 29, a strict lockdown was imposed in Shanghai to prevent the spread of the coronavirus, guided by the ‘Zero-Covid’ strategy of the Chinese government. The whole city came to a standstill.

Residents were not allowed to leave their homes. The public transport system was stopped. Shops and factories were closed. Logistics in and out of Shanghai were drastically reduced.

Since May 18, Shanghai has been cautiously easing COVID-19 curbs, a small section of the metro reopened, and a small number of residents were allowed to leave their compounds for a few hours.

After more than two months, Shanghai lifted the lockdown on June 1. The city’s public transport system resumed operation. Residents can freely leave home and return to work. The lockdown is ended ahead of the planned date of mid or end of June as per the prior announcement of the Shanghai authority.

Importance of Shanghai to China

With a population of around 25 million, Shanghai is the most populous city in China. Shanghai is also the country's main commercial and financial hub. Some facts are:

Lockdown impact on Shanghai and China

The lockdown had an immediate impact on the economy of Shanghai in April compared to April last year: Shanghai's imports and exports were lower by 36.5 per cent.  Its industrial output dropped by 61.6 per cent. The automobile industry in Shanghai is one of the sectors that was hit the most, with output lower by 70.9 per cent.

Also, the lockdown of Shanghai has affected the economy of the rest of China via supply chain disruptions. The automotive industry is an example of how the supply chain interweaves around the Yangtze River Delta. Li Auto is a Chinese electric vehicle manufacturer headquartered in Beijing. But its manufacturing facility and most of the company’s suppliers are in the Yangtze River Delta, especially in Shanghai. The shutdown and logistics freezing in Shanghai plagued the auto industry in China. As a result, China’s overall car production in April was lower by 45 per cent compared to a year earlier.

The impact of regional lockdowns on China’s overall economy is reflected in economic statistics. Compared with the same month of last year, in April 2022, China’s manufacturing output was lower by 4.6 per cent and auto manufacturing fell by 31.8 per cent. Consumption has also been hit. The total retail sales of consumer goods were lower by 11.1 per cent in April 2022.

The chart below shows the output of some selected manufacturing industries in Shanghai and China, comparing April 2022 with April 2021. It reflects the lockdown effect of Shanghai on China.

A quick look at the medical industry

The medical industry presents a mixed picture under lockdown.

On the supply side, the disruption and shutdown of factories significantly impacted the market supply of medical equipment. Consequently, in April, the medical manufacturing in Shanghai and China fell by 45 per cent and 3.8 per cent respectively compared with the same month of last year.

The ‘Zero-Covid’ policy requires constant monitoring, testing, and isolation of its citizens to prevent the spread of the coronavirus. Those measures significantly boosted the relevant medical sectors, such as medical consumables like gloves and masks, and Covid testing services.

As per the Chinese government, testing facilities are available within a 15-minute walk of everyone in its big cities. Covid testing will become normal for residents in urban areas. The upsurge of the Covid testing industry will continue under the ‘Zero-Covid’ policy.

After the lockdown in Shanghai, dozens of other cities, including Beijing, have since escalated lockdown measures to control the spread of the Covid virus.

So far there is no sign that the Chinese government is going to compromise its ‘Zero-Covid’ strategy. A continuation of stringent lockdowns will likely bring the following consequences.

An exodus of foreign investment

Covid-19 lockdowns are hurting China’s competitiveness as a global manufacturing centre and a magnet for foreign investment. The European Union Chamber of Commerce in China completed a survey to measure the confidence of European companies in China. The survey results show that 60 per cent of European-funded companies expect revenue to decline this year, and some are considering transferring investment.

Resonating with this pessimistic sentiment, on May 24, Airbnb announced that it will close its China business this summer as the ‘Zero-Covid’ policy crushes tourism.

The data from Shanghai Statistics Bureau also mirrors the wariness of foreign investors: the foreign investment in April 2022 decreased by 40.8 per cent in value and 98 per cent in the number of new foreign-invested companies compared with the same month last year.

The Chinese government rolled out some policies to boost the economy, such as cutting the reserve requirement ratio, lowering loan rates as well as fiscal policies including tax relief and increasing subsidies to businesses. But if the current ‘Zero-Covid’ strategy remains unchanged, those stimulation policies may be insufficient to prevent an economic recession.

Studies from the Chinese University of Hong Kong show a two-week lockdown in megacities like Beijing or Shanghai could shave 2 per cent off China’s monthly GDP. Similarly, JP Morgan has cut China’s Q2 2022 GDP forecast to -5.4 per cent.

If lockdown measures continue and expand regionally, China’s economy will inevitably be dragged into a severe economic recession.

The disruption or complete shutdown of a business causes severe problems in cash flow for enterprises of all sizes. The small and medium-sized enterprises are most vulnerable. The lockdown is likely to trigger a wave of bankruptcies among small businesses, increasing market concentration.

The elderly are a vulnerable group to the Coronavirus. As per the Chinese government, the ‘Zero-Covid’ policy is crucial to save lives and prevent the health system from being overrun. As per the National Health Commission data from May 5, about 227 million Chinese aged 60 and older have been fully vaccinated, almost 82 per cent of that age group. The vaccination rate is low among the elderly in Shanghai.

As of April 14, only 62 per cent of people over the age of 60 in Shanghai were fully vaccinated. If the vaccination rate continues to increase among the elderly and the whole population, the ‘Zero-Covid’ policy might be changed.

Besides, China has been developing vaccines against the Omicron variant. The progress of vaccine development will also alter China’s Covid policy.

The ‘Zero-Covid’ policy levied an enormous economic toll as mentioned earlier. A continued and expanded lockdown will drag China into an economic recession. The concerns about the economic impact of the ‘Zero-Covid’ policy grow. On May 26, during a teleconference with more than 100,000 officials across China, China’s premier, Li Keqiang, announced efforts to bolster economic growth.

The regular five-year China Communist Party (CCP) Congress is the most important political event for the Chinese government. The 20th CCP Congress will be held in the fall of 2022 when China’s most senior leaders will assemble to determine the country’s direction for years to come. The economic impact will be a crucial factor for China’s Covid policy.