Should I prone non-ventilated awake patients with COVID-19? 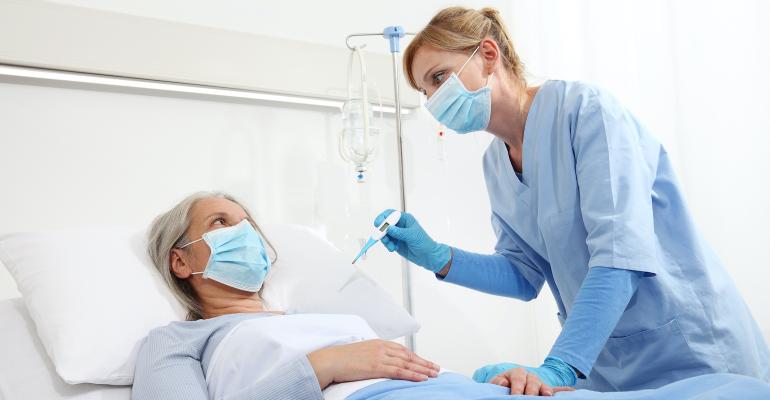 The following article is available in full, including figures and data, on Cleveland Clinic Journal of Medicine June 2020 as part of its COVID-19 Curbside Consults.

The initial evidence supporting the prone position in non-ventilated awake patients with COVID-19 infection was anecdotal and theoretical. However, several early studies support the potential role of this practice to improve oxygenation, improve clinical outcomes, and reduce the need for intensive care admission.

Although there is not a set amount of time that has been proven to be optimal for awake proning, we recommend sessions of 2 to 3 hours for at least a total 4 to 5 hours a day as tolerated based on the existing data and our anecdotal experience. Despite the low-risk and low-cost nature of proning awake patients, there are still logistical concerns that may prevent adequate proning, the most significant of which is patient comfort and compliance.

Prone positioning is a well-established and routine intervention for patients with moderate-to-severe acute respiratory distress syndrome (ARDS) who require mechanical ventilation. As COVID-19 infection spread and evolved into a global pandemic, anecdotal evidence also suggested a role for proning of non-ventilated, awake patients with COVID-19 infection.

Proning non-ventilated, awake patients, has been proposed as a potential low-risk intervention that may be associated with improved oxygenation, clinical outcomes, and reduced need for intensive care admission. Several studies since the beginning of the pandemic have addressed the potential role of proning awake patients with COVID-19 infection in optimizing outcomes.

Additionally, supine positioning may be associated with compression of the medial posterior lung parenchyma and diaphragm. During positioning, the heart becomes dependent, decreasing posterior medial lung compression. This may shift perfusion toward healthier alveoli in the anterior lungs, allowing for improved ventilation-perfusion matching and reduced intrapulmonary shunting. Lastly, proning may improve secretion management, which can, in turn, prevent atelectasis and improve recruitment of pulmonary parenchyma.

Initially, the evidence supporting the prone position in awake patients with COVID-19 infection was anecdotal and theoretical based on principles applied from proning of mechanically ventilated patients and studies of non-COVID patients, but there has since been several early studies supporting the potential role of this practice. These studies are inherently limited, however, by their small size and lack of controls, but larger robust studies are in progress.

Several case reports and small case series initially noted a potential improvement in oxygenation with awake proning in patients with COVID-19 infection. Elharrar et al reported in a single-center study of 24 patients that prone positioning was associated with an increase in PaO2 of more than 20% from baseline. Several of these patients, however, did not tolerate proning or did not have sustained improvement in oxygenation once turned supine.

Sartini et al in a cross-sectional study of 15 awake patients with mild and moderate ARDS noted a sustained improvement in most patients in conjunction with noninvasive ventilation.

Ng et al noted a reduced need for mechanical ventilation and improved outcomes in a series of patients who underwent prone positioning for 1 hour at a time, 5 times a day spaced 3 hours apart. Caputo et al studied early safe proning with up to 120 minutes as tolerated in 50 awake non-intubated patients with refractory hypoxemia (median oxygen saturation of 84%) and noted an immediate increase in median oxygen saturation with only one-third of patients requiring intubation.

Due to limited data on its efficacy, there is not a set amount of time that has been proven to be optimal for awake proning, with each study employing slightly different protocols largely dependent on patient tolerance. For example, some protocols call for patients to rotate positions every 2 hours, starting with left lateral recumbent, right lateral recumbent, sitting upright 60 to 90 degrees, and lastly, lying prone in bed. Others have suggested at least 2 separate 3-hour sessions of proning per day. Based on the existing data and our anecdotal experience, we recommend sessions of 2 to 3 hours for at least a total 4 to 5 hours a day as tolerated.

Thus several studies have suggested a potential benefit of proning awake patients with COVID-19 infection, but these studies are small and limited in their scope. Despite the low-risk and low-cost nature of proning awake patients, there are still logistical concerns that may prevent adequate proning, the most significant of which is patient comfort and compliance.