Virtual reality to the rescue 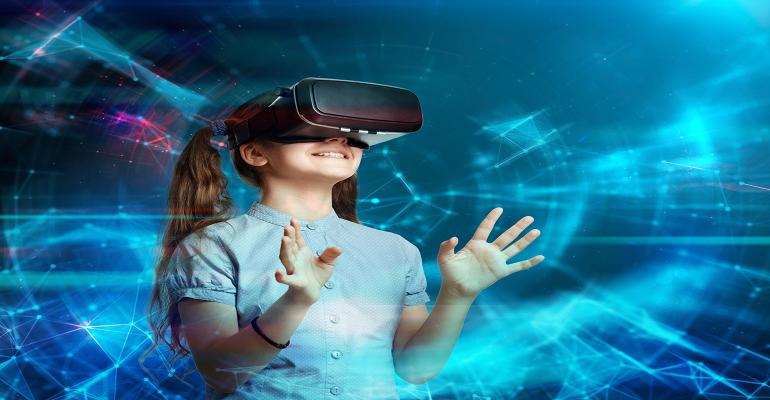 Mixed reality solutions are available today to ensure a visit to the hospital doesn’t turn into a dreadful experience for kids.

In paediatric facilities all over the world, little ones sometimes have to go through necessary but painful procedures every day. Scary enough for adults, a trip to the hospital can be an even more daunting experience for children and cause them to be anxious or depressed. With unpleasant tests to be carried out and strict visiting rules, there is little that can be done to distract and entertain young patients.

Thankfully, technology is here to the rescue! Today, mixed reality solutions such as Virtual Reality (VR) and Augmented Reality (AR) are available to ensure a visit to the hospital doesn’t turn into a dreadful experience for kids. From supporting clinical staff to patient engagement, VR & AR solutions are gaining traction globally. These immersive options let the children become an active participant in a virtual world by captivating the audio, visual and tactile senses.

Recent research has found that when someone is fully immersed in a VR experience, they release endorphins, and these can reportedly reduce the patient’s subjective pain. While children undergo procedures such as getting a cast on, blood tests or chemotherapies, VR can be a handy tool that can help them cope with the uncomfortable or painful experience by keeping them focused on discovering new worlds, thereby, reducing discomfort.

Reports have defined VR as a “relatively new tool of human-computer interactions for a human becoming an active participant in a virtual world”. This mixed reality solution first came to light in the second half of the 90s mainly for military exercises. However, with the continuous advancement in technology, it is now considered as an important therapeutic tool. In fact, in scientific literature one of the best-known uses of VR is for treating phobias and social disorders.

Moreover, VR is now an important asset when it comes to training and has become an important step between theoretical and practical preparation. Head-mounted visors that can be connected to a personal computer or linked to a mobile phone have become synonymous with VR. It makes it possible to create specific environments by controlling the different elements within it and also allows for interaction with other people within the same virtual reality.

The benefit of using VR in paediatric care is that it shields children’s eyes from the procedure. By being engrossed in the game, even if they were to look at their arm, for instance, during a procedure, it would only change the view of the game. The benefit of this technology is that as soon as you put on a pair of VR goggles, you are instantly immersed in the virtual environment.

At Arab Health 2020 earlier this year, a U.S.-based company Primer VR along with its partner, UAE-based Symed (a Pharmatrade company), made its debut at the show. The company displayed “Roomi”, a virtual and augmented reality app that aims to comfort, educate and reassure injured children aged between 6-12 years that are awaiting treatment for broken bones or muscular damage.

Combining the use of VR in hospitals and clinics, with an at-home AR app for continued recovery, Roomi blends virtual and augmented reality with animation and creative design, allowing hospitals to provide paediatric engagement while alleviating the anxiety children and parents face both in hospitals and at home.

The Roomi-verse includes characters such as Roomi, a doctor rabbit with a jetpack who flies in to treat his patients; a bear called Ladder, who has lost hair from chemotherapy; Lifeboat, a chameleon with a prosthetic tail; and Lamp, an injured glow-worm. 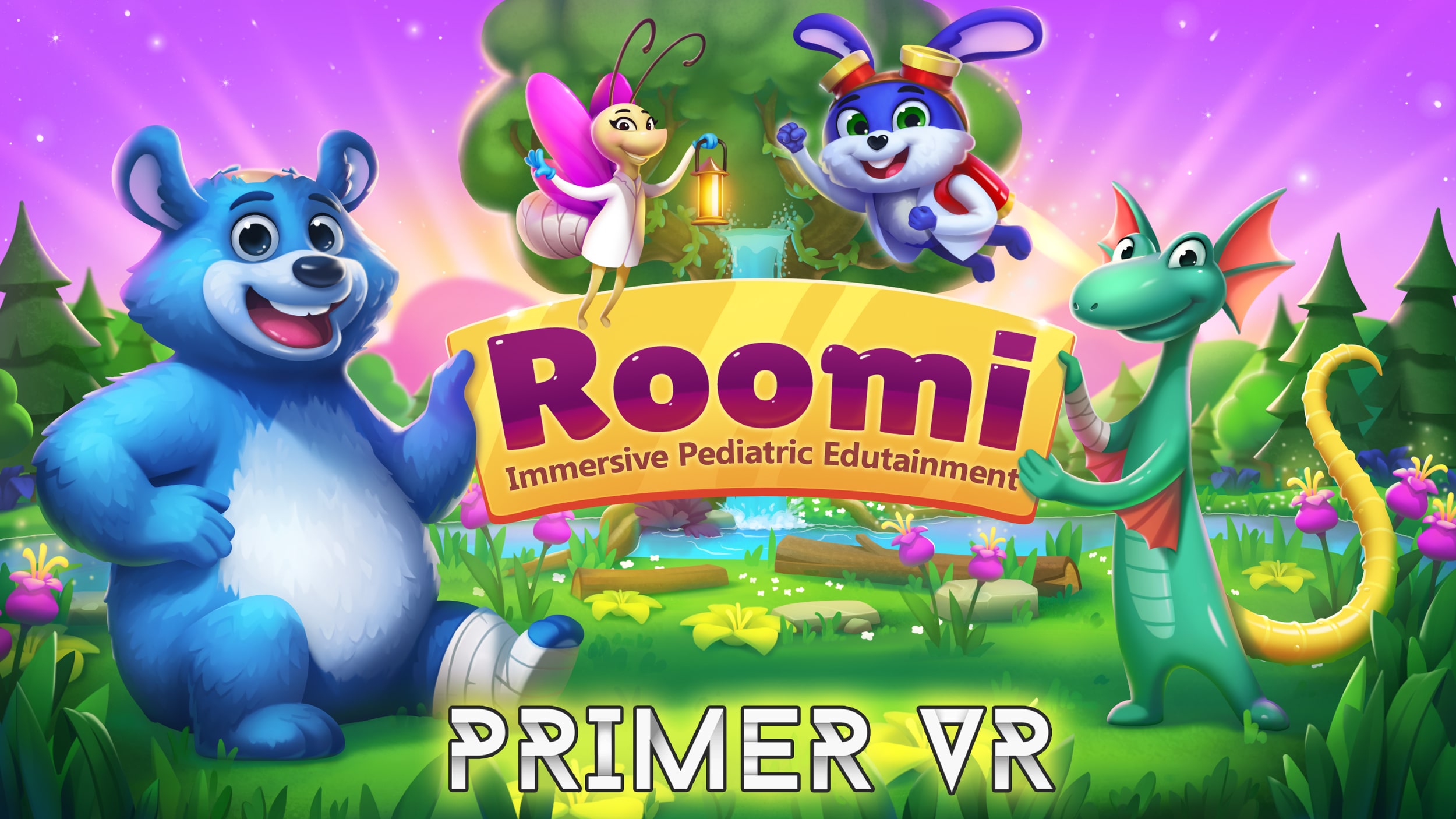 The app is the vision of award-winning filmmaker Elia Petridis, who is also the CEO/Creative Director of Primer VR. He told Omnia Health Magazine: “Our experience at Arab Health was great and we received a lot of traffic and interest from visitors. We seem to have struck a chord with these characters. They seem to speak to people. People are definitely seeing the value and are having enriching experiences with these crazy characters. I am a storyteller and got on-board great animators to tell this story with me.”

The story, animation, and immersive experience of this paediatric edutainment app have been custom-built and medically vetted to aid young patients in the healing process, relying on empathic characters and accurate information, portrayed in an immersive world. Moreover, it has been designed to be playful and language agnostic, offering a calm and inviting atmosphere. 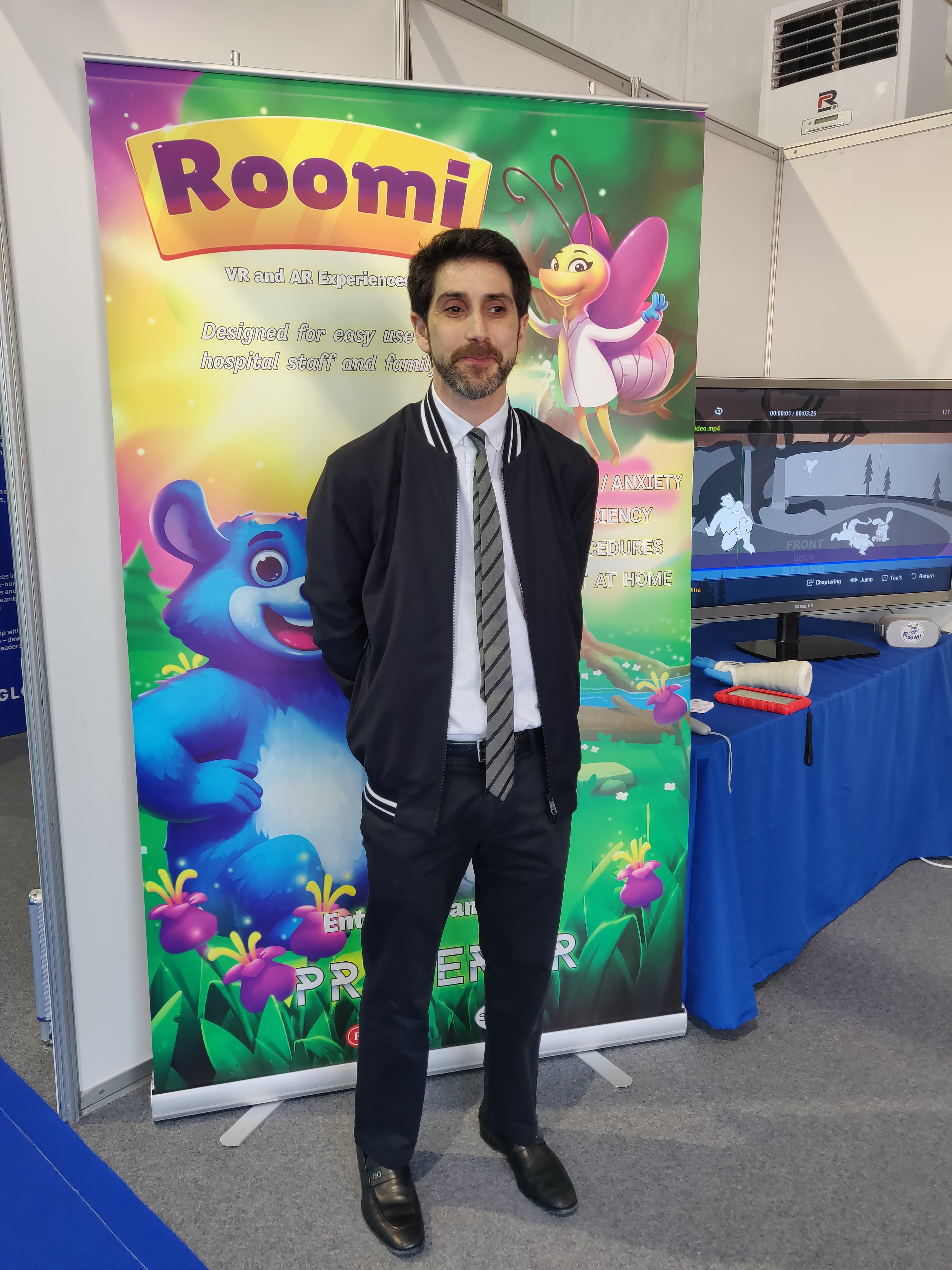 When asked about how the idea for Roomi came about, Petridis said that he wanted to solve a very old problem with a very new technology. He shared: “I have myself been familiar with hospitals and waiting rooms and I thought that it would be a nice product to make where children could start to think about something positive while waiting to get treated. Animation in VR is quite magical. Hospitals are an anxious setting and I wanted to translate that into something fun to look forward to. I thought that immersive technologies such as VR and AR stood a chance of really doing that.”

He highlighted that his team came up with the name because Roomi the rabbit could be like a kid’s roommate and is also as a homage to Rumi the poet. “The idea is that we are as simple and as beautiful as his poetry. The lesson that we teach is simple even if the procedure is complex and is something that can connect with age groups of 6 to 12-year-olds because they process things simply,” said Petridis.

Currently, Roomi has been developed to assist kids in getting casts and hopes to expand into blood tests, chemotherapy, autism, and dentistry.

While the experience is delivered through a film shown on headsets in hospital waiting rooms, at home, Roomi visits these children in their real-world through an AR application that can be launched from phones and tablets, providing continued companionship and social interaction during the healing process.

Petridis explained: “Children first experience Roomi on the headset at the hospital and then when they go home with the cast there is an AR filter sticker stuck on it. At home, all they need to do is tap the Roomi app, point it at the sticker, and the characters come to life. The characters can interact with them by asking things like “does it itch?”, “How are you doing?”. It can also get other kids to come and sign the cast online. Therefore, digital interaction causes human interaction and you can keep those digital signatures for life as opposed to losing them when the cast comes off. It becomes memorabilia. You turn something that has been full of anxiety so far into something that is commonplace and nothing to worry about. There is also a countdown with the characters reminding the child how many days are left till the cast comes off! It becomes gamified healing.”

According to Petridis, a lot of VR that currently exists in healthcare has been distraction therapy, while some have been teaching or assessment tools. “Usually VR for children is riding a roller-coaster, watching dolphins or looking at fireworks, which you can do now on YouTube anytime,” he said. “With Roomi, the goal was to create a one-of-a-kind, tailor-made educational solution that is engaging for children. The thing that is making me the happiest is that the kids are connecting with the characters and the world. They seem to love it and have responded positively to it. We are igniting their imagination.”

Pharmatrade and SyMed will reportedly be delivering the application to care networks across the region. Petridis highlighted: “Our first market to enter will be the UAE. We are still assessing the business model from the data we have amassed and are hoping to enter the market in the next few months.”

In the future, Primer VR hopes to expand immersive technology through trials and clinical study. “Roomi is starting to build communities and is connecting children that have the same malady. They can find each other through the app and on social media, and it also allows their parents to connect,” he concludes.

In recent times, renowned institutions globally have started to use immersive technology for therapeutic, educational, and entertainment purposes. Below are a few examples:

Stanford Children’s Health: Paediatric specialists at Lucile Packard Children’s Hospital Stanford in the U.S. are implementing innovative uses for immersive VR and AR technologies. Through the hospital’s Childhood Anxiety Reduction through Innovation and Technology (CHARIOT) programme, it is one of the only hospitals in the world to have VR available on every unit to help engage and distract patients undergoing a range of hospital procedures. The team is currently piloting virtual reality experiences, new tablet-based apps and interactive bedside projector-based games.

Sheffield Children’s: This hospital in the UK has launched a virtual reality app that allows children awaiting surgery to explore the hospital’s waiting area and operating theatre and get prepared for their visit all from their own home. The Little Journey smartphone app has animated doctors, nurses and anaesthetists to show children around the hospital and explain what happens when they come to the hospital for surgery. Characters such as a koala nurse and a rhinoceros doctor pop up to answer questions and talk through what happens in each area.

It is only a matter of time before VR and AR technologies receive widespread adoption across paediatric hospitals and also become a recommended tool for at-home rehabilitation. These immersive technologies are reshaping patient experiences. However, its best feature is its ability to let children be children, even during the toughest times of their lives.