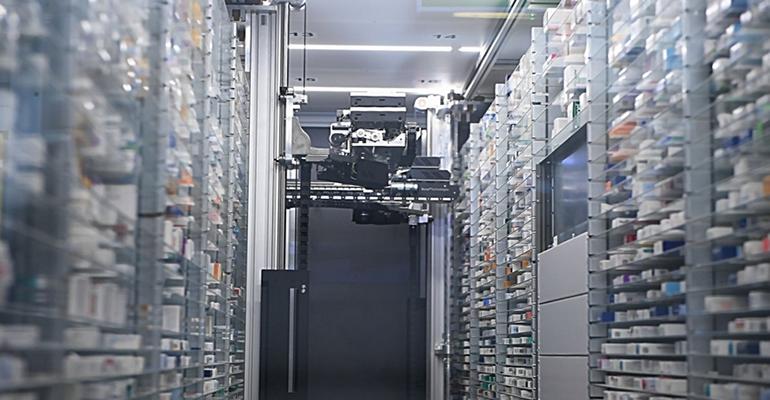 An article submitted to the American Journal of Hospital Pharmacy long ago in 1967 identified how ‘outpatient visits are increasing at a rapid rate and administrative adjustments will be needed to handle larger outpatient prescription volumes. The author laid out how, ‘new methods and procedures must be developed to reduce patient waiting time, provide the physician and the pharmacist with information pertinent to drug therapy and increase productivity through the elimination of administrative detail, which can be handled better through automation’.

The situation remains not dissimilar in 2019, some 52 years later. Outpatient visits continue to rise year-on-year, with increasingly complex patients being handled by these departments. Globally there has been a drive towards automation in healthcare to help handle the constantly increasing workload, and to allow for the redeployment of our limited numbers of highly qualified staff away from routine tasks and towards more constructive engagement with patients.

There is also considerable political and financial pressure on healthcare decision-makers to optimise the utilisation of resources and to improve services for patients, whilst ensuring that any automation and technology that is deployed definitively adds quantifiable health-economic value. The size of any initial investment in health technology and automation is inevitably significant and requires substantial decisions to be taken about funding, the need for change, and required re-engineering of a facility’s infrastructure and established a hospital and department procedures, policies and workflows.

The remit of the Health Technology Assessment Office to the UAE Ministry of Health and Prevention (MOHAP) is to act as a guide on the introduction of new Health Technology to MOHAP in an efficient, equitable, transparent and explicit manner. The priority of the office is the welfare of the UAE’s population and to act always with the highest economic, ethical, legal, social and organisational standards regarding patient care.

The improvement in the number of completely filled prescriptions was perhaps partly due to the increased numbers of individual medication types that the automated pharmacy can store. These increased to 114,262 individual medication types, up 1.3 per cent from the 112,814 held in the traditional pharmacy’s storage. This is not an uncommon finding in automated pharmacies; robots are simply better than humans at mundane tasks like constantly calculating the optimum way of stacking and placing medications on shelves, this ensures that more items can be stored without increasing the overall volume of stock. Up to 4,000 medication packs/metre of shelving can be stored by advanced robotic systems.

Pharmacy robots even use ‘down-time’, when they are not dispensing or adding the stock, making minute adjustments to existing stock on shelves and cleaning the storage area. An increase in line-item storage without a concurrent growth in stock level overall would generally be responsible for less bound capital, the reduction of expired stock loss, and a higher value to the organisation in the stock held as more prescriptions could be serviced and completed.

When adding stock pharmacy robots can also read expiry dates on drug packages, and thereby reduce waste from out of date medications, and also automatically recognise medications that require refrigeration. Some automated pharmacies have internal refrigerated storage units within them and their entire stock area is temperature-controlled.

The large increase in speed of dispensing by the automated pharmacy seen in the head-to-head study is probably due to the nature of ‘picking’ by the pharmacy robot; rapid barcode identification of ordered medications and multi-picking of up to 8 medication packages per move makes for a speedy pick-up and conveyor belts and automated gates leading to spiral chutes can deliver these picked medications directly to the patient service point.

Regular inventory is a labour-heavy task in a manual pharmacy. Automated pharmacies can maintain a consistent inventory count as each of the actions, direct loading into the robotic-managed storage with barcode reading for medication stock-up and automatic item deduction from stock level upon dispensing is under its control. This means that the inventory balance is a constant and dynamic process.

From what has been seen in this head-to-head study, the time savings and accuracy of automated dispensing for outpatients are both impressive. Further efficiencies are perhaps also possible if workflow bottlenecks, such as that between prescription and the commencement of dispensing can be resolved. Studies generally seem to indicate that the fuller the integration between systems such as Computerised Practitioner Order Entry, Electronic Medication Administration Record, and the patient’s Electronic Medical Record and automated dispensing systems, the greater the gains for the organisation.