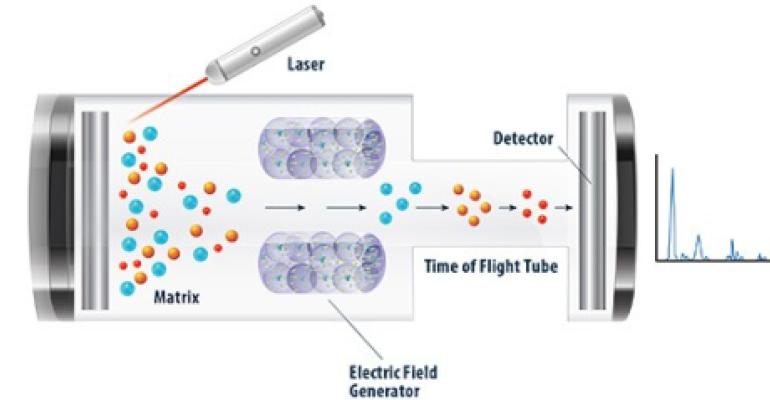 Over the past few years, matrix assisted laser desorption ionization-time of flight mass spectrometry (MALDI-TOF MS) has emerged as a tool for microbial identification and diagnosis. At MEDLAB 2018, Albarah El-khani, MSc (CSSBB), Director of Technical Operations at National Reference Laboratory (NRL), shed light on the principles of this revolutionary technology that is positioned to have a strong impact on improving clinical outcomes for patients.

El-khani said: “While it is true that with advancements in technology we have been able to meet the growing demand for faster turnaround times in every laboratory discipline, it has been quite challenging to achieve similar progress in the microbiology laboratory.”

Traditionally, microbiology testing is a labour intensive and lengthy testing process, requiring microbiologists to wait patiently while the microbial cultures grow enough to be identified. Once grown, the processes that follow - Kit for direct  identification of bacteria and yeast specifically staining, microscopic examination and identification of the resulting growth - each add approximately 12-24 hours to the time needed to report the result growth - collectively reaching a total turnaround time of 48-72 hours.

El-khani highlighted: “Although the traditional process continues to be important today, we are fortunate to live in an era of development where technologies such as the MALDI-TOF MS allow us to significantly improve the turnaround time of microbial identification.”

There are various methods used to identify microbes, including: phenotypic, immunologic, genotypic, and proteomic.

Mass spectrometry (MS) is an analytical technique in which chemical compounds are ionized into charged molecules (ions), following which the components are separated by their mass-to-charge ratio. Although MS was developed in the early 1900s, its scope and application was limited to the chemical sciences. However, the development of electro spray ionization (ESI) and MALDI-TOF MS, as advanced types of MS methods in the 1980s, increased the applicability of MS to large biological molecules such as proteins.

El-khani explained: “The MALDI-TOF MS technology was developed in the 1960s; however, growth in the number of publications related to the use of MALDI-TOF MS for bacterial identification occurred only in the past 10 years. The publications and the visibility they provided led to MALDI-TOF MS becoming a mainstream technology and a major breakthrough within the microbiology diagnostic laboratory.”

The MALDI-TOF MS method uses a laser to ionize the sample consisting of proteins and polymers, where the analyte is embedded in a crystal aromatic matrix. The presence of the matrix causes the large molecules to ionize, instead of decompose or fragment, when absorbing the laser energy. As a result, the analyte ionizes into a gas phase and a “cloud” of proteins is released into a flight-tube in the mass spectrometer. The proteins are accelerated by an electric charge, and after passing through the tube, their “Time of Flight” is recorded. The proteins are then detected with a sensor that creates a spectrum which represents the protein makeup of each sample.

Finally, the spectrum is compared to a known database of proteins, and according to the match, the microbial identification is completed.

Currently, many laboratories are using MALDI-TOF MS technology to replace selected steps from the conventional microbial identification process; for example, confirming the genotype samples for isolated cultures. Such process enhancements significantly reduce the turnaround time of bacterial identification by at least 12-24 hours. As a result, the time to report antibiotic susceptibility is also shortened.

One of the most important applications of the MALDI-TOF MS technology is the identification of microbes from samples for blood cultures, which represent approximately 10% of the samples received by microbiology laboratories. Bloodstream infections are associated with high rates of morbidity and mortality among hospitalized patients. The risk of death from septic shock increases by 7% with every hour that passes, and the mortality rate in severe sepsis is reported as high as 35%. Therefore, the time required to complete the identification of microbes in sepsis, and to establish their antibiotic sensitivity in order to administer appropriate antibiotic treatment, is crucial for the clinical outcome of patients.

A study conducted on 501 patients found that MALDI-TOF MS based identification in comparison to conventional identification, resulted in the following:

El-khani continued: “The application of MALDI-TOF MS technology in the microbiology laboratory greatly improves clinical outcomes by reducing morbidity and mortality, guiding more appropriate antibiotic selection and initiating appropriate infection control measures. The positive impact of this technology becomes evident as it improves patient care and reduces financial costs for the patients, providers, payers and the healthcare system in general.”

El-khani concluded: “Currently, we are able to use MALDI-TOF MS for bacterial identification of several types of primary samples including blood, urine and cerebrospinal fluid. It will not be long before MALDI-TOF MS will be used to directly analyse other samples, such as stool and sputum, and thus reduce the time to diagnosis for a wider variety of diseases. The next development that is expected to bring pivotal change to the microbiology laboratory is the full automation of the testing process. Full automation will further improve laboratory efficiencies and enhance the quality of the microbiology testing process through increased reproducibility and productivity which will reduce contamination and time to result. With the many advancements in technology in the microbiology laboratory, physicians will be able to provide appropriate therapy for their patients earlier than ever before.”