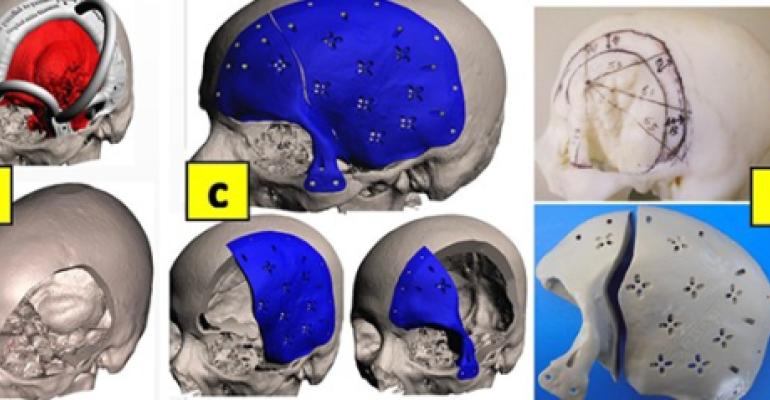 Applications vary from anatomical models used in preoperative surgical planning to customisation and designing of surgical splints and patient specific implants. These applications result in significant advantages characterised mainly by reduced surgical time, improved medical outcome, improved understanding of complex cases, improved confidence of both surgeon and patient, and overall cost reduction. An example of the main uses of 3D printing applications can be seen in Image 1.

Hence, there is huge demand for establishing 3D services within major hospitals to enhance quality of care provided alongside improving hospital standing and developing local hospital expertise. However, it is not an easy task to plan requirements for a 3D service within an ongoing hospital system and sustaining such service. This article aims to discuss briefly the chief aspects to take into account when planning an in-house 3D service along with some innovative applications.

1. 3D Service Finance
This deals with securing funding for setting up, running and sustaining the 3D services. 3D technologies can be expensive as it includes different resources, staffing and space. A business case is usually developed around the needs of possible users. These can include surgical departments, academic university partners, and research centres. Funding can be central through the government and having a state-wise strategy for such 3D services makes it easy to obtain government funding. Other funding can come from clinical care regional groups, hospital budgets or through charity organisations. Costs associated with sustaining the service is the biggest factor in determining the usefulness of using such 3D service in clinical practice. It is important to show how such 3D service can be cost-effective, in the long-term. Running cost can encompass consumables like materials, software and hardware, service contracts, overheads and staff salaries. Additionally, cost can be complicated by the fact that hospital finances look at budget and possibilities of cutting off services that are not generating enough income to cover their running costs.

2. 3D Service Support
It is beneficial to gather local evidence within the hospital of costs associated with outsourcing its 3D need to private companies (i.e. models, planning, PSI). The cost is usually high considering its speciality and complexity. Hence, a business case proposing to re-channel these costs by an in-house 3D service will be appealing to hospital management. This is not only because the cost incurred will aid in service development but also because such a service can be easily accessed by medical professionals without the risk of breaching patient confidentiality usually associated when outsourcing cases to other providers. Local surgical teams can aid greatly in supporting such evidence by highlighting 3D use in their practice. Other funding sources include organising reimbursement based on well-established systematic evidence that clearly show direct benefit of 3D service in relevant medical speciality. For example, there is ample evidence in the cranial and maxillofacial world that 3D services decrease costs related to time saving in the operating room.

3. 3D Service Resource: Selection and Location
3D service workflow goes through different stages as summed up in Diagram 2 below. These involve 3D reconstruction of patient scan images into virtual 3D model that can be visualised in 3D space using Specialised Segmentation Software. There is a range of segmentation software available to perform this operation with Mimics (Materialise, Belgium) being the commonly used software. Once digitally created, the virtual 3D model is exported as standard triangular language (.stl) which can be accessed by a 3D Printer software to print it. There is a variety of prototyping as 3D printers vary in cost, printing accuracy, materials printed and colours of 3D models. Files created are stored virtually and linked to the patient electronic records. In some cases, 3D Surface Imaging Systems can be used to enhance the clarity of patient scan (i.e. 3DMD).

Diagram 2: Suggestive workflow process of 3D service management from referral to archive.
It is integral for the service to be easily accessible by all possible users, especially medical clinicians. Surgeons would be more inclined to attend the 3D facility between surgeries for a quick review of the 3D planning of a case. Hence a location close to operating rooms and in close proximity to radiology department would be ideal. Utilising the right resource of software and hardware is a challenge especially if there are different service users. An ideal 3D service workflow includes different processes as shown in Diagram 2. It begins by processing scan data (i.e. CT, MRI) into virtual 3D reconstruction which is then 3D printed into 3D model. It might be challenging to secure a central space for all needed processes, however, processing facilities can be centrally located and production facilities (i.e. 3D printers) can be peripheral but all within close proximity.

4. 3D Service Regulation Management:
3D services within hospitals impact demand for regulation and management for safe and efficient use. Its regulation has gone through three phases as described by Christensen and Rybicki. From a regulatory perspective, there are different views on what does or does not constitute a medical device, and there is regulatory difference between hospitals constructing 3D parts versus companies providing such parts. For example, a 3D model generated based on CT data is considered a medical device in EU but not the USA. In the EU, Medical Devices Directive treats 3D printed medical devices and accessories to medical devices as “custom made devices”. Furthermore, such devices need to satisfy relatively strict criteria about prescription, material production, and patient customisation. It is integral to develop an in-house Quality Management System (QMS) of its software, hardware, and patient data. For example, the software needs to be updated regularly, and segmented 3D models should be checked against their original axial scan. The 3D printer needs to be calibrated after certain printing hours (i.e. 300 hr), and printing accuracy needs to be checked against known measurements of 3D models.

Innovative 3D applications: A variety of cases are presented in this section highlighting the innovative use of 3D technologies in 3D planning and reconstructive treatment of various patient groups.
Skull Defects: A young patient had a history of convexity meningioma growing on the surface of her brain directly under the skull. She was treated by several surgeries resulting in two thirds of her skull bone being removed including frontal bone, left side parietal, temporal bones along with right side parietal bone as shown in her CT view in Image 3 (A). The CT scan was reconstructed to 3D representation of her skull bone and soft tissues (B). The 3D skull file was exported as .stl file and 3D printed (C). A biocompatible titanium skull implant was constructed restoring the missing bones of the 3D model (C). The implant was fixed as planned (D). Improved skull aesthetics and reduced operating times were achieved along providing optimum protection to brain.

Ear Reconstruction: In this case, the patient had a right side pinna resection secondary to skin melanoma. The case was presented to the clinic with concerns about his look (Image 4 a, b). Treatment options were discussed and he opted for adhesive retained ear prosthesis. An impression of his existing left ear was taken. The impression was cast in gypsum (c), which was then surface scanned using 3Shape surface scanner. The digital file was then mirrored to become the right ear which was then printed in 3D printer (d). The printed ear was then duplicated in maxillofacial silicone elastomer (e). The ear was made to match patient skin colour using 3D Spectromatch colour system (g). The patient was happy with the outcome (f, h). The same principle applies to reconstructing missing facial parts. We have presented different publications describing integration of advanced 3D technologies in reconstructing missing facial tissues in earlier publications.

3D planning: The case as seen in Image 5 presents left acetabular orif with posterior column screws and multiple metal artefacts (a, b). There is associated postsurgical haematoma with surrounding soft tissue swelling and locules of free gas. There is a right femoral intermedullary nail across the lower femoral fracture (b). 3D planning was performed to enable visualisation of current implanted plate and to view optimum access during corrective surgery (c, d).

Bi-Maxillary Jaw Surgery: Image 6 is a case of class III malocclusion. The treatment plan involved Le Fort I Maxillary surgery and BSSO (Buccal Sagittal Split Osteotomy) of the mandible. 3D reconstruction of the patient’s CBCT scan was done using CMF Pro Plan software, then a scanned copy of patient’s teeth was amalgamated with the scan (A). The plan was to advance maxilla forward 8mm and rotation of upper midline 1.82 mm to the left so it is coincident with facial midline. It also included impaction at upper six molar of 2mm to correct occlusal cant. Accordingly, the mandibel moved 3.66mm forward (B) and these movements were accepted (C). Soft tissues simulation was performed and facial profile changes were accepted (D). Surgery splints were designed and printed to translate surgery to the operating room.

2 in 1 Skull meningioma reconstruction: In Image 7, a case of skull meningioma presented on the left side of the skull and involving left sphenoid wing, frontal, parietal, temporal, and super-orbital bones. Treatment plan required the resection of the bone meningioma, and reconstruction of defect at the same surgery. First step was 3D reconstruction of patient’s CT scan data using CMF Pro Plan software to visualise the 3D meningioma bone and soft tissues (A). Then virtual surgery was performed and meningioma was resected with a cutting guide to define bone removed (B). Two-part implant was 3D designed by external company (C) and then 3D milled in PEEK and cutting guide was 3D produced in polyamide (D). During surgery the guide was fitted over the skull (E) and bone resected (F) and defect was reconstructed with the implants (G).

Conclusions and Clinical Significance
3D printing has revolutionised practice of medicine in all aspects from pre-surgical planning of complex medical pathologies, to patient education and medical training. It means that for any speciality, a 3D replica of patient targeted anatomy (i.e. skull meningioma, heart) can be obtained in a timely fashion for assessment and refinement of treatment, which in turn enhances surgeon’s confidence and patient’s understanding of their disease and rationale of their surgery. Accordingly, this means surgical intervention will benefit through reduced time, improved outcome (i.e. function, aesthetics), and minimal postsurgical complication and revisit. On the other hand, in-house 3D services can have significant non clinical advantages as they aid in advanced ranking of hospital and development of local expertise. Out of the top 20 hospitals as ranked by U.S. News and World Report, 16 have implemented a medical 3D printing strategy. Furthermore, out of the top 10 children’s hospitals, 9 have implemented a medical 3D printing strategy.
A centralised interdisciplinary 3D service within any hospital will impact greatly and positively on treatment outcome. A variety of complex cases can be attempted with such in-house service as shown with the case examples earlier. 3D technologies are a breakout point in healthcare with accelerating number of healthcare institutions adopting it. Its application can vary greatly among different medical specialities as it has become an essential component of most surgical specialities, with infinite opportunities.