Development and Advances in Joint Replacement of the Hand 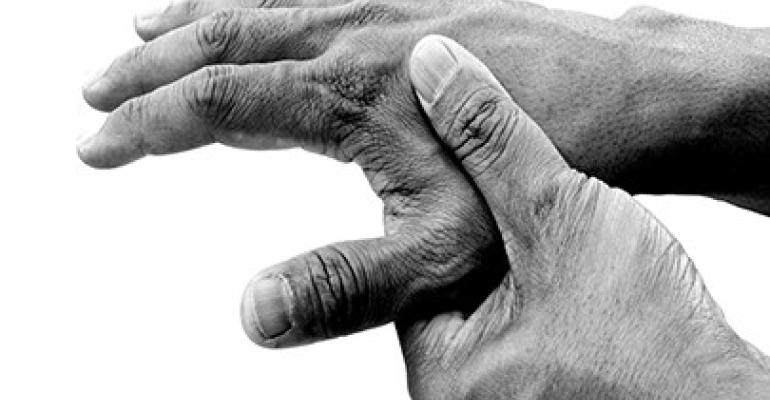 Silicone arthroplasty presented some complications during the following years. In 1985, came the first report of the occurrence of synovitis, a reaction to the silicone implants, occurring when the wear debris particles accumulate in the synovial tissue producing a reactive synovitis, called silicone synovitis, which produce lytic lesions in the surrounding bones. Swanson determined that the synovitis was influenced by mechanical factors, implant type and silicone composition. It was noted around overload articulations, when the implant was oversized or misaligned, when there was joint instability, excessive motion or overuse.

The need of having a more functional hand stimulated the development of silicone implants for small joint arthroplasty in 1962. Silicone implants were studied extensively in laboratory tests, animal experiments and long-term human retrievals to determine the local and systemic host responses while a number of different designs of the double-stemmed hinged finger joint implants were evaluated in a flex-test machine, and after extensive studies, the implant midsection was volarly hollowed out to accept a redistribution of compression forces generated in the volarly reinforced base of the distal stem during flexion. This distributing-load flexible hinge design was tested to 600 million flexion repetitions without change, having the least resistance to flex-load forces, and offering adequate stability to prevent vertical buckling.

This silicone double stemmed hinges were first used by Swanson for metacarpophalangeal joint (MCPJ) reconstruction in 1964 and then in 1965, were developed for the Proximal Interphalangeal Joint (PIPJ).

Bone response to this kind of arthroplasty with encapsulation of the implant has enhanced implant stability, eliminating the need for permanent fixation, improving bone tolerance, the distribution of weight forces and prolongs the life of the device. Although these kinds of implants have provided a means of treatment for arthritic joints, the limits of range of motion and stability they produce have gradually reduced their indication, living space to the new developed implants.

It was also reported that silicone implants were submitted to sharp bony edges and shearing forces that eventually would fracture the implant. Despite the above, the rate of complications is clearly low making those implants to remain the U.S. FDA (Food and Drug Administration) benchmark against which all other finger joint arthroplasties are judged.

Due to the advancements in fingers joint replacement, the silicone implants have been left as the treatment of choice for patients suffering from Rheumatoid Arthritis, Inflammatory Arthritis and severe degenerative destruction of the joints, mainly because of the limited range of motion and the less demand on the patients. Good control of the rheumatic disease by the rheumatologist is paramount to achieving a greater longevity of the implant, and to prevent recurrence of ulnar drift.

The surgical technique is quite simple, keeping in mind that the size of the implant is always given by the proximal phalanx in MCPJ and for the middle phalanx in the PIPJ; and that excessive shortening in the MC head resection of the middle and ring fingers will alter the MC arch and impair the function of the hand and diminish grip strength.

The NeuFlex MCPJ silicone implants came to the market in 1999 trying to improve upon Swanson’s implants, reduce their complications and improve results. This implant has a 30° pre-bend in flexion and a hinged design to mimic the normal centre of rotation of the MCPJ, decreasing stress of the material and improving overall functional arc and ROM (range of motion); also minimising abrasion and wear debris from forming.

My experience with the Swanson implants started almost 30 years ago, followed by the move to use the NeuFlex prosthesis later on. I have recorded over a 18-year period, 81 cases of MCPJ silicone implants in 48 patients, with an improvement of the ulnar drift to almost neutral or less than 5°. The extension deficit that presents the patients with the disease improved after surgery to only 5° or 10°, associated with a good grip strength and a more functional and cosmetic hand. But every pathology has their own characteristics. In all the inflammatory arthropathies we know that most of the joints will be affected that is why we are not forcing to recover a strong hand.

But in post-traumatic arthritis or degenerative arthritis, one or maybe two joints are only involved, while the others are completely normal. This brings us to the situation where the silicone implant we are using is less indicated due to the resulting reduced range of function. With this problem in mind and looking at the good results of the knees and hips arthroplasties, the idea of having an artificial joint that can be anchor to the bone using cement or cementless technique developed and the term ‘osteointegration’ began to be applied to the arthroplasties for small joints.

Many short-lived designs have been introduced aiming to improve long-lasting stability and range of motion. In 1997, Linscheid developed at the Mayo Clinic a surface replacement (SR) concept with a meta-polyethylene device where both parts of the prosthesis were cemented, producing a very good improvement in the range of motion. This implant has the advantage of minimal bone resection, with accurate restoration of the centre of rotation and more reliable restoration of tendon movements in the joint, and due to the clear disadvantage of using cement, which makes revision procedures difficult, an uncemented version came later to the market.

The two pieces’ unrestrained prosthesis use a chromium-cobalt proximal component and an ultra-high molecular weight polyethylene (UHMWPE) in the distal component. It needs a minimal bone resection with preservation of the collateral ligaments, providing a more stable joint, particularly to imposed lateral forces. The great articular congruency adds a better distribution of the compressive loads assisting for the great joint stability. The stems are rectangular to maximise rotational stability and are slightly curved to match the curvature of the medullary canal.

The kinematic of those implants in the PIPJ has been studied, showing a similar movement to that of the normal joint, with a maximum 5° of angular displacement and 9° of rotation movement during passive flexion and extension motion.

For all the above, perichondral resurfacing arthroplasty (SRA) has been proposed for young or middle adults with post-traumatic or degenerative arthrosis, with functioning collateral ligaments or reparable. Those patients are more active and need to recover a good range of joint motion. These results have been proven in several papers confirming also a pain relief of 70-90 per cent.

But disadvantages have also been reported such as the higher risk of dislocation or subluxation compared to silicone implants. Tendon balancing and ligament functioning are extremely important to prevent this happening. Meanwhile, the difficulty of revision due to the cement fixation in the first implants had been resolved with new stems that are coated to encourage the osteointegration.

SRA are technically more demanding and much less forgiving than silicone joint replacement.

During my service in the UK, I did 23 MCPJ replacements in 11 patients followed by SRA. I had two cases of lucency in the phalangeal component, without symptoms. 19 had no pain and two had minor discomfort. Their arch of position went from 27° pre-surgery to 60° post-surgery and the disability score improved from 70 per cent disability to 9 per cent after surgery.

Pyrocarbon was developed in the 1960s from a collaboration between CEA (French Commission for Atomic Energy) and General Atomic (U.S.) and was for nuclear applications, as a coating for nuclear fuel. Pyrolytic carbon is a synthetic material formed by the pyrolysis of a hydrocarbon gas at approximately 1300 °C. In 1969, this material was successfully used to make components of artificial heart valves, and since then it has shown exceptional reliability.

The mechanical properties of this material has the nearest Young’s modulus (modulus of elasticity) similar to cortical bone, does not cause adverse reaction to surrounding tissues, and has no evidence of wear or debris production and excellent bone-implant incorporation. Pyrolytic carbon finger joint arthroplasty was introduced in 1979, and their use for carpal implants developed in the 1990s. But it was not until 2001 that the EEC authorised the use of the PIP prosthesis, designed by J. Stanley (Wrightington Hospital, UK) and R. Beckenbaugh (Mayo Clinic, Rochester, U.S.).

The results of these implants show an improvement in the range of motion, relief of pain, adequate biological fixation and only few complications.

For the last 20 years, I have been using more Pyrocarbon implants, 17 altogether, than the metallic ones, with the same indications, but providing a better range of motion, less complications and better survival rate, not seeing bone loosening in five years of follow ups.

Similar implants have also been developed for the trapezio-metacarpal joint (TMCJ), and since 1973, when Caffiniere presented his first model, there has been a countless number of implants to deal with the osteoarthritis (OA) affecting that joint.

My own experience had been mainly with the Avanta SR, which in my opinion reproduces better the anatomy of that joint. In the UK, I did 43 thumbs in 34 patients in stage II and III of Eaton, mainly females, mean age of 56 years, with a survival rate after five years of 93 per cent and producing a good function of the hand, recovering strength, grip and pinch function in all the cases. Only three cases presented bone reabsorption without clinical correlation and only four complained of unspecific pain, which were classified as implant failure. But despite some good results provided by this arthroplasty, years later, the company withdrew the implant from the market.

In the following years, and due to the implementation of the pyrolytic implants, I have started using those type of prosthesis, hemiarthroplasties or pyrodisk with similar results in improving the range of motion, pain control and grip strength. Complications of dislocation has also improved with those pyrolytic implants.

In conclusion, the overall results of the arthroplasties of the hands have proved to be good enough to recommend these implants for the treatment of stiffness, pain and lack of functions affecting the hand. They are technically demanding, so the experience of the surgeon is of paramount importance to achieve the best results. Thankfully, the recent interest of the industrial companies in hand pathology and the need to develop joint replacements have improved the implants available in the market in recent years, but still they are not able to match the success of large joint arthroplasties. Fingers provide a more challenging mechanical problem than that of the large joints, but results are encouraging and continuing to improve with further investigations.