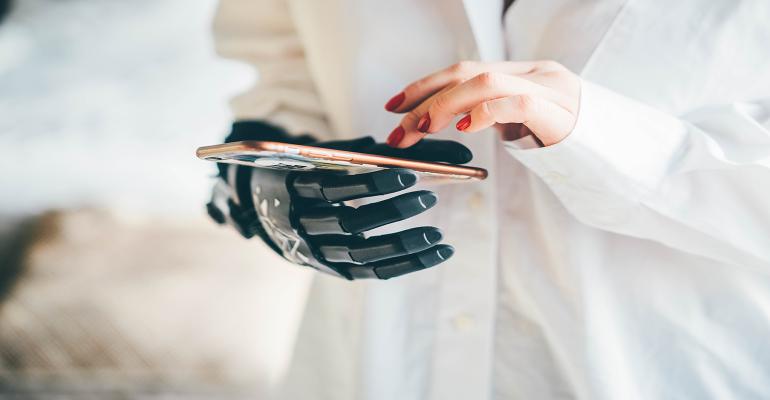 A bionic arm allows wearers to think, behave and function as a person without an amputation.

Researchers at Cleveland Clinic, in collaboration with the University of Alberta and the University of New Brunswick in the U.S., have engineered a first-of-its-kind bionic arm for patients with upper-limb amputations. The novel system combines intuitive motor control with touch and hand movement sensation allowing wearers to think, behave and function as a person without an amputation.

“We modified a standard-of-care prosthetic with this complex bionic system, which enables wearers to move their prosthetic arm more intuitively and feel sensations of touch and movement at the same time,” said lead investigator Paul Marasco, associate professor in Cleveland Clinic Lerner Research Institute’s Department of Biomedical Engineering. “These findings are an important step towards providing people with amputation with complete restoration of natural arm function.”

The system is the first to test all three sensory and motor functions in a neural-machine interface all at once in a prosthetic arm. The neural-machine interface connects with the wearer’s limb nerves. It enables patients to send nerve impulses from their brains to the prosthetic when they want to use or move it and receive physical information from the environment and relay it back to their brains through their nerves.

To effortlessly complete an intentional movement, the brain needs feedback from the body regarding the movement’s progress. This largely nonconscious kinesthetic sense helps the brain learn relationships between motor commands and outcomes to correct movement errors.

Prosthetic systems for restoring function have predominantly focused on controlling motorised joint movement. Without the kinesthetic sense, however, these devices do not become intuitively controllable.

The study reported a method for endowing human amputees with a kinesthetic perception of dexterous robotic hands. Vibrating the muscles used for prosthetic control via a neural-machine interface produced the illusory perception of complex grip movements. Within minutes, three amputees integrated this kinesthetic feedback and improved movement control.

Combining intent, kinesthesia, and vision instilled participants with a sense of agency over the robotic movements. This feedback approach for closed-loop control opens a pathway to the seamless integration of minds and machines.

“Perhaps what we were most excited to learn was that they made judgments, decisions and calculated and corrected for their mistakes like a person without an amputation,” said Dr Marasco, who leads the Laboratory for Bionic Integration. “With the new bionic limb, for the first time, people with upper limb amputations are now able to again ‘think’ like an able-bodied person, which stands to offer prosthesis wearers new levels of seamless reintegration back into daily life.”