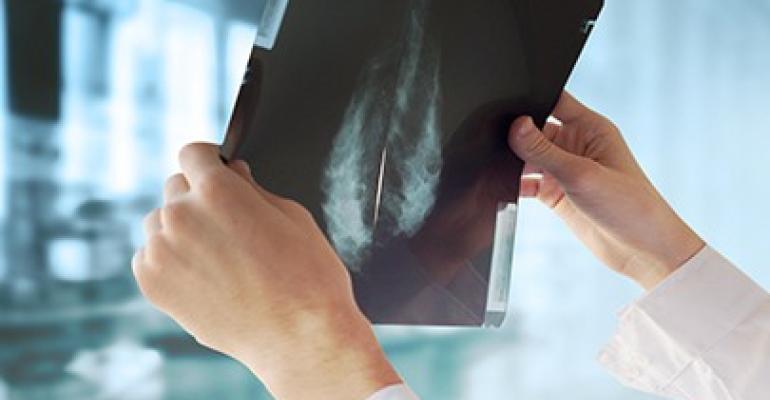 She says: “When you do the 2-D mammogram, breast density can hide something underneath. But when you do the 3-D mammogram you can more carefully analyse what’s inside the density, slice by slice. And at that time, you may notice finding a true cancer.

“I first experienced 3-D mammography in 2016 with Siemens MAMMOMAT and over the years, 3-D has quickly becoming the standard of care.”

What 3-D offers, she says, is the ability to see certain anomalies that just aren’t apparent on 2-D screens. Further, sometimes a 2-D image will show something suspicious, but when looking at the image in 3-D it ends up being an overlap of tissue and not a cause for concern.

“A situation like that, creates a lot of anxiety for a woman who is called back for additional testing,” she explains. “She’s assuming it’s cancer, but it might be a non-cancerous or benign finding. Using 3-D technology dramatically reduces the number of false alarms.”

Dr. Albastaki added that standard 2-D digital images are provided even when 3-D is used, giving physicians a complete picture of the breast architecture.

“3D definitely has a clinical advantage,” she highlights. “The 3-D scan is an additional sweep that takes 1-milimeter slice pictures through the breast. It opens the structure of the breast, allowing us to see more cancers.”

In her experience, Dr. Albastaki shares that the 3-D scan typically adds just one to two minutes more to the screening.

Furthermore, research has also shown that cancer detection rates have improved by 40 per cent when 3-D imaging is used in addition to 2-D. That’s because breast cancer outcomes notably improve, the earlier the cancer is detected.

The downsides to 3-D breast imaging are minimal. The doctor pointed out that 3-D scans do come with a greater radiation exposure than 2-D scans, about the same as a film X-ray. The only time she doesn’t do 3-D scans is because of patient preference or fatty parenchyma.

“The benefits definitely outweigh the downsides of it,” Dr. Albastaki said. “3-D is the newest technology available in mammography. It’s a huge clinical benefit and we have it readily available right here in Mediclinic Airport Road. It improves accuracy and overall visualisation for the physicians, and provides greater peace of mind and reduced anxiety for patients.”

A recent study titled “Effectiveness of Digital Breast Tomosynthesis Compared with Digital Mammography: Outcomes Analysis From 3 Years of Breast Cancer Screening,” saw researchers analyse 44,468 screening mammograms of 23,958 women who had never been diagnosed with breast cancer. From September 2010 to August 2011, all the women were screened with digital 2-D mammograms only. For the next 3 years, the women were screened with 3-D mammograms.

Still, these rates were much lower than the recall rate of 104 per 1,000 women screened for 2-D mammograms. This difference was statistically significant, which means that it was likely because of the difference in screening technique rather than just due to chance.

“These results and further studies with exciting outcomes along with my personal experience show that 3-D mammography has become an essential part of routine breast cancer screening,” Dr. Albastaki concludes