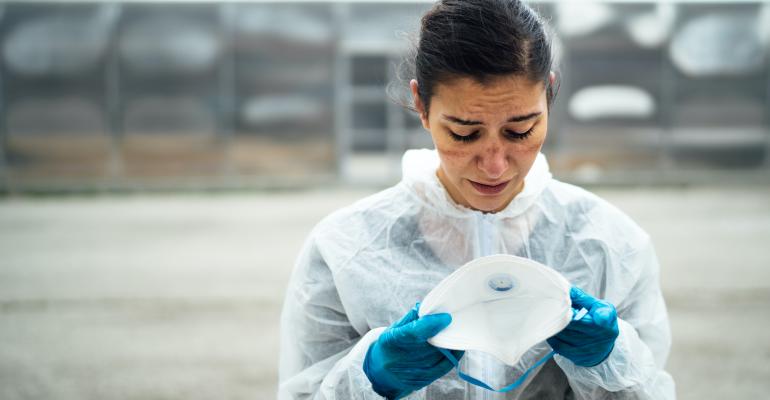 Healthcare workers bore the brunt of pandemic mental health problems, because when everybody else was going home, they were going to work.

Healthcare workers have borne the mental health brunt of the pandemic, being on the frontlines, discussed speakers on the last day of the three-day Patient Safety Virtual 2021 Conference that started on Thursday.

In an interview session titled “Tackling post-pandemic clinician mental health” with Cynthia Makarutse, Senior Conference Producer, Informa Markets, Dr Marjorie Morrison, psychologist and CEO, Psychub, said, “Healthcare workers bore the brunt of the worst because when everybody else was going home, they were going to work. They were treating people – they are the true heroes of Covid.”

She also said that the mental health spectrum had widened during Covid and since every person, including healthcare workers, already had underlying issues, the pandemic exacerbated it.

“When everyone was at home, they were going to work and deal with everyone else’s anxiety. I think healthcare providers, clinicians and technicians are going to have the toughest of recoveries because it is only so long that you can work in this chaotic, traumatic environment before you start to see repercussions of that.”

Makarutse said that mental health in clinicians is not a new topic but Covid-19 has affected people in various ways and has brought mental health to the forefront not only for the healthcare workers but for people in general.

Dr Morrison said, “Mental health has been issue for a very long time but has pretty much been ignored. Now in the US, four out of 10 people are reporting signs of depression and anxiety which is up four times more than it was pre-Covid.

“And we don’t need to be a specialist to understand why this has happened. There is a crisis, a lock-in as well as uncertainty which was a common thread with almost everyone in the world since everybody was undergoing the same experience.”

Dr Morrison said that the world was on the brink of mental health crisis before Covid. “It was brewing but Covid shed light on the entire issues. Before it there was so much shame, either with substance abuse or other mental health issues where people were pretending or trying to hide them.

But in Covid, we are seeing it more and athletes, actors and musicians have been coming out and sharing their mental health issues which I see as positive since we are moving the conversation more to the middle of the spectrum.

Answering to a question by Makarutse on whether the pandemic has brought mental health issues to light or broadened the spectrum, Dr Morrison said, “All these issues were there before but Covid exacerbated all of them.

The fear of the unknown is the hardest thing for humans because we like to have control as much as we can. So when we don’t know what is going to happen, it creates anxiety no matter what."

Other than financial implications, there was the fear of losing jobs, the impact on the economy and health. “There was a point in time when everyone though that they might die so when you add all this, it blew up.”

Dr Morrison also said that social media contributed to an increase in anxiety. “When you see all these people look so happy on social media and if you are not so happy, it gets to you. All this was already brewing and Covid came, it kicked all this into over drive.

Talking about mental health stigma, Dr Morrison said that we don’t realize what biases we have.

“If you haven’t had difficult times, you can’t really think of good times. It is how we learn to feel about things; like differentiate between good and bad days.”

She also advised people to keep sharing their stories. “Because what happens is that you make it okay for others to share their stories and this affects the whole eco-system including your employers who then are more sympathetic and understand. Also, don’t be afraid to ask to help,” she added.