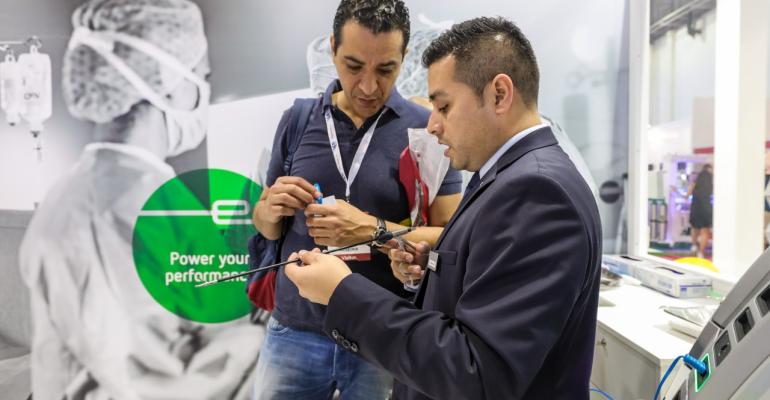 Arab Health 2019 exhibitors surveyed to gauge their opinion on key drivers and barriers to growth.

Healthcare is one of the fastest growing sectors in the Middle East and the UAE is no exception, with healthcare expenditure estimated to reach US$21.3 billion by 2021. The intense potential within health was apparent at Arab Health 2019, where industry professionals across the sector verticals turned out in force for the largest sector expo in the region.

To provide greater insight into the current business landscape in the region, strategic communications consultancy group, Hanover, conducted a survey of businesses at the conference to gauge confidence in the region in 2019.

“We wanted to find the key drivers and the barriers to growth, as well as the areas where industry insiders are expecting to see the greatest growth,” explains Simone Elviss, Director – Healthcare, Hanover Middle East.

According to the barometer (Fig 1), when businesses were asked how confident they were that they would grow in the region this year, 87.9 per cent of businesses felt positive or very positive that their revenues would grow this year compared to 90 per cent last year. In contrast, 11.5 per cent felt that their growth prospects were neutral (2018: not asked) and no one described prospects as negative (2018: 2 per cent).

Respondents were asked to name the major barriers to growth faced by their business in the region. The chart (Fig 2) shows the numbers of times a response was chosen as companies responding to the survey could choose more than one barrier.

“Two barriers stood out clearly, the first being the highly competitive marketplace that exists within the region, with an increasing number of companies competing for customers, resources and suppliers,” Elviss says. “Competitiveness has moved up from second place last year, shifting regional geo-politics from the biggest barrier to the fourth spot.”

The second biggest barrier to growth was government policies, which was also a key issue last year and again noteworthy because government policies to expand access to healthcare are also mentioned later as one of the greatest drivers of growth.

According to Elviss, “It may be that individual companies face challenges with specific policies related to their sectors, despite the overall direction being positive. Respondents described the regulatory environment and product registration key areas of policy that presented challenges.”

The price of oil, as well as payer focus on value and price, were other barriers that were mentioned by respondents with a lower priority.

The overall increase in healthcare spend from private and public sources again tops the list as the biggest driver of growth in the region, followed closely by rapid market and infrastructural growth (Fig 3).

“Alongside positive government policies striving to enhance all aspects of the system, this trifecta is representative of development of healthcare in the region in terms of the offering and access within the region to quality and affordable healthcare options, providing opportunities for businesses in all areas of the system from delivery to technology and medicine,” Elviss explains. “This perfect storm underpins industry confidence in the region but nods also to the highly competitive environment and a need to differentiate and demonstrate value to clients, customers and patients.”

Respondents were asked to name which areas of healthcare they expected to see the biggest growth. Medical devices topped the list with consumer health and pharmaceuticals following closely. These were seen to have greater opportunity than the development of infrastructure or IT systems and solutions for health systems – perhaps an indication these areas are seen to be over-competitive, or difficult to differentiate the offer.

“As systems drive efficiencies and cost savings, devices which differentiate hospital offerings, improve outcomes for patients or support with e.g. remote monitoring could be a real boon in this market,” Elviss says.

While globally, the frontier of innovation is shifting towards service and software offerings, the survey respondents expected to see a similar level of innovation in products and physical tech within the region as they do in software and digitisation. This reflects the overall confidence in devices, over-the-counter (OTC) and prescription medicines and is a clear nod toward the desire within the market for hospitals and clinics to be equipped with state-of-the-art tech to serve their patients.

Tolerance is a key virtue of Islamic culture and 200 different nationalities peacefully coexist in the UAE, and to this end, the country has declared 2019 the ‘Year of Tolerance’ as it strives to demonstrate its inclusivity and mutual respect across religions and cultures. But tolerance is a somewhat abstract concept when it comes to healthcare and Hanover questioned the industry on what its place in this sector truly is.

“The result was overwhelmingly positive, with respondents believing that tolerance is an essential part of healthcare – throughout the patient journey,” says Elviss. “The idea of inclusivity  came through strongly, as respondents talked about ensuring all patients – no matter their nationality or role in society – have equal access to quality healthcare and that provision is sensitive to different cultures.”

In addition, in a culture where fear and stigma can often influence healthcare decisions, the idea of tolerance ensuring openness and patience were mentioned.

Finally, industry specialists were asked how they thought Artificial Intelligence (AI) would alter healthcare in the next 10 years.

In the context of previous answers limiting the importance of technology, the reaction to AI was broadly positive and touched a variety of areas of the patient journey. A major theme was data capture and analytics, information sharing and using big data to make predictions and support clinical decision-making.

Hand in hand with this was the potential improvements in personalising care and treatment options based on large data sets. Another theme was the augmentation of human capability – being able to do things better or more efficiently.

In addition to this was the potential to reduce reliance on unskilled or lower skilled labour – and the concurrent potential to build a highly knowledgeable and skilled workforce to harness these technologies.

“Closely aligned to the UAE’s goals was the potential for AI to support patients in pre-disease stages, triggering awareness of potential health concerns and allowing them to seek preventative care at an early stage,” Elviss concludes.