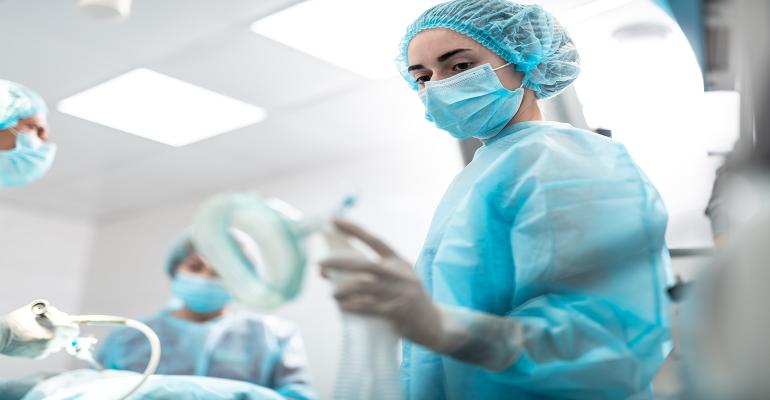 On October 12, hear from nurse leaders about their experiences of dealing with COVID-19 at the virtual Nurse Leadership Forum Middle East.

The first firework of New Year’s Eve exploded in the sky above Samoa in the South Pacific. As the earth rotated and 2019 came to an end, another party started in another location, gradually heading westwards.

Auckland, Sydney, Singapore, Beijing and Delhi, into Dubai, Abu Dhabi and Riyadh, steadily onwards to Rome, Paris and London, over the Atlantic to New York, Chicago and Los Angeles, Rio de Janeiro and Buenos Aires, finally coming back to American Samoa just 100-miles from where it started 24-hours before.

As the earth revolved and millions of fireworks over hundreds of cities fizzled out, more than 7.6bn people had looked upwards with private hopes about the upcoming year.

In healthcare, the World Health Organisation had designated 2020 The Year of the Nurse and Midwife to help raise the value of nursing, choosing the date to coincide with the 200th anniversary of the birth of Florence Nightingale, often regarded as the founder of modern nursing.

But within days of New Year 2020, another city was in the news. Few knew where to locate it. But within a month most of the world had heard of Wuhan, China.

By February, COVID-19 was already circling the globe faster than all those New Year firework displays and suddenly the Year of the Nurse and Midwife had taken on a completely new meaning.

Globally, an average of 5.7-people in 1,000 work in the healthcare sector, half of those in nursing. That figure is far higher in the 25% of the world with better-funded healthcare systems, whereas 50% of countries report 3-people per 1,000 population and 25% report around 1-person per 1,000.

Nursing can be a tough vocation, and so the WHO had set 2020 as a year of focus on the wonderful work of the 20.7-million nurses across the world.

In just a few short weeks the whole world had to take on an entirely new challenge. For the first time in 100-years, everyone on the planet was involved in a struggle and nobody could look at their own families, communities or countries and claim this was a problem for other people.

It felt existential. It felt as though the world was saying ‘enough’. The future looked extremely bleak.

The value of nurses and the nursing profession

Nursing has always seemed a vocation, a calling.

Nurses’ experience, knowledge and care has continually been admired by patients and clinicians, if not sometimes by legislators who can take that compassion for granted when pay and conditions are discussed.

But COVID-19 brought nurses and clinicians to the centre very quickly, and the world came to understand why nursing has been an essential, but sometimes overlooked, profession. Human nature being what it is, nursing has perhaps been overlooked not because people don’t care, but because it’s so good, so professional and so pervasive in our lives that a high level of care, compassion and commitment had become expected by the 994-people out of 1,000 who don’t work in healthcare.

We have come to expect that service and care. Now we were all faced with the realization that these people were constantly in the front line of our safety, and we started to realise their value to the world. As we woke up to the facts, nurses and clinicians were facing more challenges - ones they knew would put them in danger.

In the middle of alarming rises in the rates of COVID (and attendant deaths and cases) nurses, doctors, hospitals, healthcare workers, health authorities and governments managed to somehow bring a semblance of joined-up thinking to a confused world. Hospitals were built almost overnight, curfews put in place, safety became the total priority and thanks were expressed daily.

What we now see were strategies being put into place to protect health workers, encourage public responsibility and head off the impending doom as safely as possible.

But what were those strategies in the midst of the crisis? What were Nurse Leaders doing to learn, pass on ideas and change the ways of working? How were nurse teams being supported in a physical way through PPE etc, and from a mental health perspective?

An initiative launched by OBIX Middle East, and powered by Omnia Health by Informa Markets, the event is FREE to attend for all nurses, nurse leaders, healthcare executives and clinicians.

The event Steering Group comprises 27-Chief Nursing Officers and senior staff from hospitals across the GCC, both government and private sector, and the focus of the event is “Compassion, Clinical Effectiveness and Burnout: Essential Strategies for Nurse Leadership”.

The easy to follow online event encourages participation by questions from the audience and is moderated by professional broadcaster, Brandy Scott, who many will know from her morning show, The Business Breakfast on Dubai Eye 103.8FM.

The two keynote speakers are Professor Ciaran O’Boyle, Director, Centre for Positive Psychology and Health at The Royal College of Surgeons, Ireland and Associate Professor Jane Griffiths, recently Chief Nursing Information Officer at the Dubai Health Authority, and both will be speaking to the issues with thoughts on help available for nurses in the field of mental health.

The event will also highlight other nurse leaders through a series of pre-recorded interviews with CNO’s running teams of nurses, from 200- to more than 6,000-nurses across many teams and hospitals.

When the World Health Organisation created 2020 as the Year of the Nurse and Midwife it was surely not with this crisis in mind but, as always, nurses and the nursing profession stepped up to the task.

OBIX Middle East focuses on the perinatal sector as the regional headquarters of Clinical Computer Systems, Inc., a business which has clinicians at the centre of all we do. The OBIX system runs at the heart of labour and delivery units in hospitals responsible for 25% of all births in the USA and we’re here in the Middle East with full-time staff rolling out new implementations.

Since we established in 1997, we have always offered education and knowledge back into our nursing communities, and this free-to-attend event continues this long-established principle by sharing experiences, strategies and help with the nursing profession in the Middle East.

This event is for all in nursing, no matter the discipline, and we look forward to welcoming you on October 12th at 3 pm-5 pm Gulf Standard Time. Register now and join us for some inspiration and community.