Surgical simulation has the potential to deliver miracles 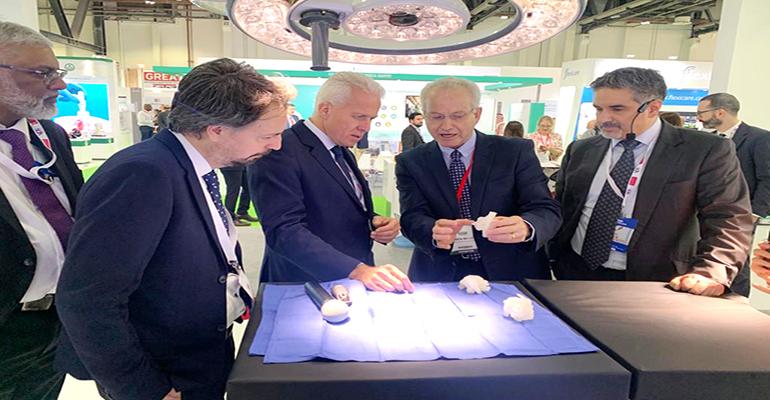 Surgeons from Evelina London, part of Guy’s and St Thomas’ NHS Foundation Trust, conducted a surgical simulation at Arab Health 2020 that drew a crowd of curious onlookers. It involved highlighting complex heart surgery, which hopes to give the best possible chance of survival to children diagnosed with heart problems, including congenital heart disease.

Rory Mannion, Commercial Business Development Manager, Evelina Children’s Hospital told Daily Dose: “We wanted to perform the surgical simulation with two consultants, a cardiologist and a cardiac surgeon and show the visitors more about how these two colleagues work together to deliver the best patient journey. We also wanted to talk about one of our core areas, which is advanced cardiac imaging. We have a very long history of pioneering new techniques in the UK and internationally. At the moment, we are the only centre in the world to offer motion corrected 3D morphological fetal MRI.”

He further explained that the reason to do the simulation with a cardiac surgeon and a cardiologist was that imaging techniques and antenatal imaging techniques such as 3D MRI allow the team to diagnose congenital heart defects before the child is delivered. This is really helpful in terms of planning surgery. “They allow us to use 3D printing and have 3D printed hearts, which we also had for the simulation,” he said. “This is to visualize and plan the best surgery possible. Visually it is so impressive. When someone can look at something in 3D it makes a massive difference.”

The simulation also addressed how risky and difficult these surgeries are and how the hospital achieves some of the very best outcomes in the world. Typically, worldwide, there can be a mortality rate of 15 to 20 per cent for some of the most complex procedures – but Evelina London's outcomes are significantly below this.

“The antenatal pathway is exceptional about the Evelina in London. We are a children’s hospital but also part of Guy’s and St Thomas’ and are co-located with women’s services. If a woman comes forward, we can assist them with conception, we can do the antenatal diagnostics including fetal diagnostics. If there is an issue identified in the womb, then we can work to deliver in St Thomas’ and transfer the newborn to the NICU at the same site,” said cardiologist Owen Miller.

At the simulation, the consultant’s highlighted two patient stories. One of the child’s name is Evelina dedicated to the hospital by her parents, for saving her life. Images were shown of her meeting the hospital's patron HRH Catherine, Duchess of Cambridge. The other patient was Abdul Rahman from Kuwait.

“The mother came to us when she had a fetal diagnosis and was told to seek treatment. She delivered prematurely at St Thomas’. Abdul Rahman spent the first six months of his life at the Evelina. He is an amazing case because he had a hypoplastic left heart syndrome, which means that he was born without half a heart. He also had an incredibly complex lung condition. That meant doing the surgery and getting him fit for the surgery very difficult. He is really a miracle patient. Today, he is such a healthy, happy, laughing, curious lad,” the surgeons said.

Surgeon Caner Salih concluded: “We are proud to work with this world-leading solution that has been instrumental in saving young lives. Our unit diagnoses around 200 major heart abnormalities in babies before birth each year. As well as detecting problems with the way the heart has formed, we can detect abnormal heart rhythms and problems with the heart function, working together to give them the best possible chance of survival.”