The role of interventional radiology in hepatobiliary disease 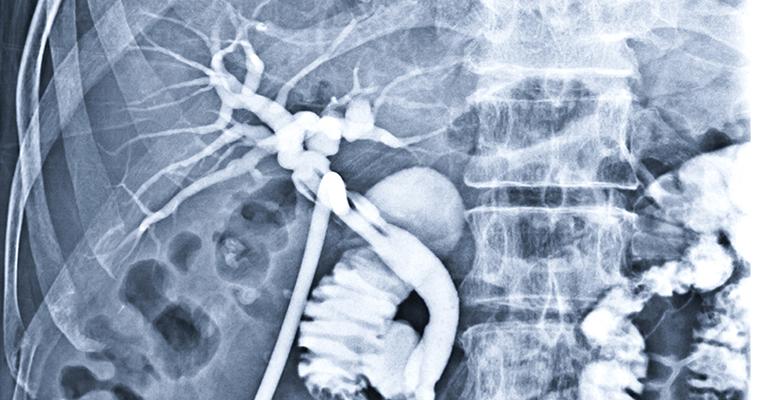 A transjugular approach provides a safer method with lower risk of significant haemorrhage.

Although imaging of the biliary tree was introduced as early as 1922, it was the introduction of percutaneous trans hepatic cholangiography by the ultrathin needle in the late 1960s in Japan and the subsequent use of cholangiography without the need for surgical intervention by Okuda in 1974 that heralded the involvement of radiologists in the image-guided management of liver and biliary tree conditions and which developed rapidly with the introduction of modern imaging tools like ultrasound, CT and MRI. The specialty of Interventional Radiology developed alongside the availability of image-guidance and the manufacturing of various devices that are designed to meet the challenge of the various clinical conditions.

The modern multi-disciplinary approach to many of the conditions that affect the hepatobiliary system encompasses the collaboration of internists, interventional radiologists, endoscopists, surgeons and oncologists to achieve the best outcome.

This is mostly done through a percutaneous approach under Ultrasound (US) or computed tomography (CT) guidance (Fig 1). Occasionally Magnetic resonance (MRI) guidance is required. In patients in whom clotting abnormalities exist, a transjugular approach provides a safer method with lower risk of significant haemorrhage.

Cirrhosis of the liver and the subsequent elevation of portal pressure is more prevalent in areas where hepatitis is common and also where alcohol abuse is present. The development of oesophageal varices frequently leads to recurrent episodes of bleeding, which can be quite severe and life threatening. Surgical measures to reduce the portal pressure such as porto-caval shunts have long been practiced however the bulk of management is now based on the use of beta blockers, local treatment of bleeding by endoscopists and the formation of intrahepatic shunts under image guidance. Transjugular intra hepatic porto-systemic shunt (TIPS) is now the treatment of choice for uncontrollable variceal bleeding and other manifestations of portal hypertension and liver disease such as persistent ascites. This procedure is performed, as its name indicates, by advancing a catheter from the right jugular vein into the hepatic vein and then creating a track through the liver into the portal vein followed by dilatation of the track and the insertion of a covered stent across the track that connects the systemic circulation with the portal circulation (Fig 2). The size of the stent is chosen according to the clinical situation and the level of portal pressure. Generally, a gradient of less than 12mmHg is required across the shunt to achieve a satisfactory outcome. There are other medical measures to reduce the incidence of encephalopathy that can happen after any form of porto-systemic shunt creation. The varices may be embolised through the shunt that provides access to the portal system and its tributaries. One of the main advantages of TIPS in addition to the minimally invasive non-surgical approach, is that it does not prevent future liver transplantation.

Budd Chiari Syndrome is related to venous obstruction either inside the liver or at the level of the large hepatic veins or the vena cava. Patients can present with an acute liver failure or develop symptoms gradually and ultimately go into liver cirrhosis and failure. Reducing the pressure emanating from liver congestion at an early stage may prevent progression into advanced cirrhosis and ameliorate the clinical symptoms. The interventional radiologist may perform one of two main treatment procedures depending on the clinical scenario; TIPS or restoration of major vein patency. The latter may require a complex procedure combining percutaneous and transjugular approach in cases where the veins are totally occluded (Fig 3,4,5). A stent is generally required to maintain patency of the re-opened major vein.

This is commonly related to tumours such as cholangiocarcinoma and may happen at different levels in the biliary tree. Endoscopic management of obstruction is preferred when the level of obstruction is in the common hepatic or common bile duct. Obstruction at the level of the hepatic ducts or the confluence is better managed through percutaneous drainage. Biopsies can be obtained from inside the obstructed ducts to confirm the diagnosis. The drainage procedure starts with cholangiography performed by insertion under ultrasound or fluoroscopy, of an ultrathin needle into the bile duct and injecting contrast material to outline the ducts and level of obstruction. Subsequently a wire is introduced into the bile ducts and manoeuvred through the obstruction. A drain may be inserted to decompress the system (Fig 6). Alternatively, a metal stent may be placed across the point of obstruction depending on the clinical scenario.

Liver tumours, whether primary like hepatocellular carcinoma or metastatic may be treated locally after, or in conjunction with, systemic chemotherapy or surgical resection. The interventional radiologist has many tools at his disposal:

Post-traumatic aneurysm formation can be life threatening. Control of the bleeding point is usually possible by trans-catheter embolization of the point of bleeding. Similarly, other causes of bleeding, particularly post-surgery or intervention and from rupture of vascular tumours, can be handled by catheter-based intervention (Fig 10,11). Finally, post liver transplant vascular problems such as stenosis of the artery at the anastomosis requires rapid action. Frequently, balloon dilatation alone or in conjunction with stent insertion can save the precious transplant.

The interventional radiologists have a pivotal role in the management of a wide range of conditions that affect the liver and biliary tree.