HomeClinicalLets PARTY back pain away
Recent
Can healthcare robots answer physical and emotional needs?
May 27, 2022
The deadly case of the Therac-25: a warning for medical AI
May 26, 2022
Innovation vital in the evolution of clinical trials
May 25, 2022
Emerging cases of monkeypox investigated
May 24, 2022
POLL
The essentials of personalised healthcare in low-budget regions
May 23, 2022
The Florida International Medical Expo gears up for landmark 2022 event
May 23, 2022
AI, big data, VR and blockchain expected to power patient-centric applications
May 20, 2022
Dubai Hospital launches ‘Da Vinci Xi’ surgical robot to perform robotic-assisted minimally invasive surgeries
May 19, 2022
Daily Dose
brought to you by

Lets PARTY back pain away 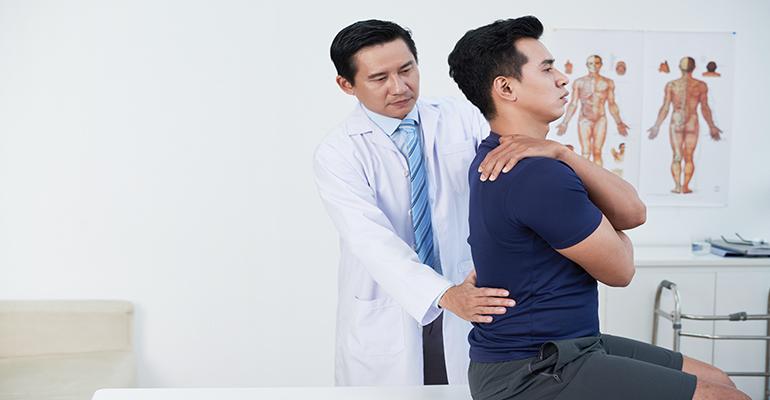 Back pain is not a disease. It is a symptom. It is not considered a disease, because most cases of low back pain are non-specific, where there is no clear structural or anatomical cause that can be identified. Despite significant advances in medical science, low back pain is on the increase due to an ageing world population. Low back pain alone, globally contributed to 57.6 million total years lived with disability. There is also no medicine, injection, device or operation that can cure back pain. Lifestyle modification and exercises remain the main options for relief of symptoms. Even in spite of the global epidemic of low back pain there are still some inconsistencies among international guidelines regarding the best treatment protocol or measures to prevent recurrence.

What types of exercises are best suited for treating low back pain?

Various forms of exercises exist to treat and prevent low back pain. These fall into three broad categories; general fitness or aerobic exercises, strengthening or resistance exercises and flexibility exercises. Different individual therapies like Pilates and Yoga use a combination of these techniques. Research has not provided clear evidence that one form of exercise is superior to the other in the treatment of lower back pain.

Resistance training or strengthening exercise programmes have been more popular and have shown to be beneficial in injury prevention. The Fédération Internationale de Football Association (FIFA) introduced a 11-point programme to reduce injuries in football. Among these, the two main exercises for the lower back were the forward and side plank. Evidence that has emerged, since the introduction of this warmup programme, suggests that the FIFA protocol has decreased injury on the soccer field by 30 per cent.

In addition to exercises, therapeutic patient education (TPE) also forms a key element in treating low back pain. Therapeutic patient education reduces the negative effect of fear avoidance and promotes treatment compliance. Metaphors are a powerful and effective modality of TPE. They help the mind to grasp concepts that are new and unknown by linking it to something which is similar but not identical.

If exercise and life-style measures are the key elements in treating and preventing the recurrence of back pain, then the process should be simplified, de-medicalised and made enjoyable and should be real fun to engage in. If treating back pain has to be fun, then the outlook should be “Let’s PARTY back pain away”. PARTY aka Pilates, Aqua Exercises, Running, Tai Chi and Yoga. 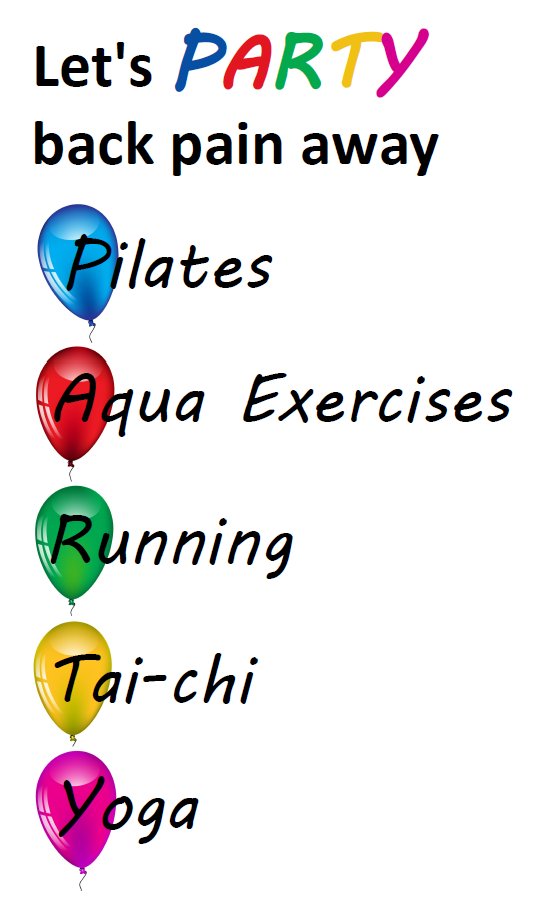 Pilates is a method of exercise that was developed by Joseph Pilates, from Germany. His belief was that physical and mental health was closely connected. Lin and co-researches reviewed eight randomised control trials. Their final conclusion was "in patients with chronic low back pain, Pilates showed significant improvement in pain relief and functional enhancement."

Aqua exercises are gentle exercises done in water. Usually in a swimming pool. The buoyancy of the water decreases the stress from weight bearing whilst the resistance of the water provides the necessary work out for the muscles. Irandoust and others did a study on a small number of elderly males. However, their conclusion was that a water-based exercise programme improved low back pain and body composition.

Belavy studied 79 individuals between the ages of 25 and 35. There were three groups of patients. The first group did not participate in sports or physical activity, the second group were joggers running 20-40 kms per week and the third were long-distance runners doing more than 50 kms per week. Their research showed that walking and slow running, increased the hydration and the height of the discs. It is possible that the cyclical loading from running may have improved the health of the disc. On the other hand, lack of activity, fast running or high impact jumping activities were not beneficial.

Tai chi is an exercise regime that originated in China. It is a gentle and a smooth flowing exercise. The benefits include increased balance, improved health status with chronic conditions and better awareness of the body.Hall and colleagues studied 160 volunteers. Their conclusion was that, when compared to a 10-week programme of usual care, Tai chi exercise is significantly better at reducing the pain intensity and bothersomeness of back symptoms.

Yoga originated in ancient India. Traditionally it encompassed religion, meditation and physical exercises. In the western world, yoga became popular in the 1980s. Its usefulness comes both from the exercises and relaxation. The review by Crow and others analysed six different studies with a total of 570 patients. Their study showed strong evidence that Iyengar yoga was an effective means for treating both back and neck pain in the short term.

1. Metaphor to demonstrate how strong back muscles prevent injury

Peter and Paul are identical twins. Being identical twins, they have the same genes. Peter works in a removal company. He lifts an average of three tonnes across 50 meters each day. Paul on the other hand works in an office. He is sat on a chair for eight hours every working day. The only physical activity that Paul does is push a pen on paper or keys down a keyboard. Sitting for long periods de-conditions his back. That is, the muscles become weak and cannot support the vertebral column. Over the weekend, both Peter and Paul are gardening in their respective homes. Each of them has to lift a bag of compost weighing about 20 kgs. Peter, the removals man, lifts the bag without a problem. Paul, the office worker, hurts his back when he lifts the same load. It is wrong to blame the act of lifting as the cause of Paul's problem. If lifting was the problem, then it is more likely that Peter who lifts more, would have hurt his back. In reality it was Paul who developed a problem with his back. That is because Paul's back was not fit for purpose.

2. Metaphor to encourage pacing of activity

Patrick needs to drive a distance of 20 kms. He is in a hurry and needs to reach his destination quickly. Driving through red lights may seem fast but is likely to get him into trouble. The Police may stop him for over speeding and failing to obey traffic signals. Driving at a steady pace is more likely to get him to his destination safely and on time. This is similar to recovery from back pain. Patients are very eager to exercise and err on doing too much too soon. This only gets them into more trouble. How then can we handle this? It is common practice to score pain on a scale of 0 to 10. Let us assume that a score of 0 to 4 is “Green”, a score of 5 to 7 is “Amber” and a score of 8 to 10 is “Red”. Let us also assume that before exercise or activity the pain is on green, starting at 0/10. With commencement of activity or exercise, the pain is likely to increase. It is important that the activity and exercise is stopped when one reaches “Amber”. Fighting the pain barrier is only going to get us into trouble with our inner brain which acts as a policemen and modulates our activity.

3. Metaphor to understand why weak muscles in the lower back can damage the discs. 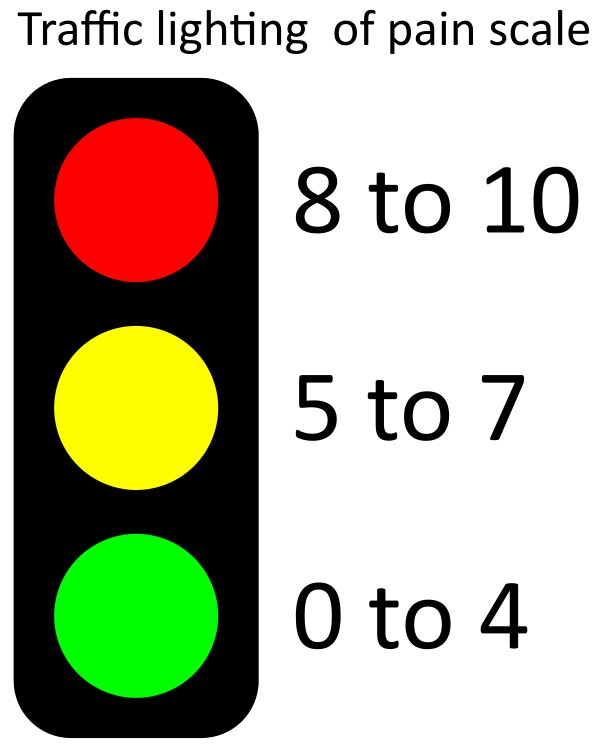 Some difficulties in the classic medical management of back pain

2. Fat infiltration of the multifidus muscle.

Though not essential, MRI scanning is being used more often when assessing low back pain. Unfortunately, the scans and the reports focus on the abnormalities in the disc, the bone and the nerves. Very rarely do MRI reports focus on the muscle. If exercise is a key element in the management of back pain, then the effect, that back pain has on the muscle needs to be evaluated and reported. One of the muscles that form the core and support the spine is the multifidus. This lies very close and adjacent to the spine. In chronic back pain the multifidus muscle becomes smaller and is replaced by fat. MRI scans can identify the infiltration of fat in the multifidus muscle.

Infiltration of fat into the multifidus is not related to obesity or body weight. It is unfortunately a reaction that occurs as a result of back pain. It is important that MRI scans, if and when performed, for mechanical back pain should attempt to describe the state of the multifidus muscle and the extent of fat infiltration. Providing a report which states that there is no degenerate disc or nerve compression provides no measures to the patient to rectify the situation.

Spinal surgery is not a procedure to be taken lightly, it comes with an array of complications and a potential to worsen symptoms from baseline. An important example of this is ‘Failed Back Surgery Syndrome’ (FBSS). FBSS is defined as back pain which persists despite surgery or occurs after surgical intervention for treatment of previous spinal pain in the same region. Essentially, the original pain may still exist or worse still increase despite surgery which was intended for minimising discomfort. Once FBBS has occurred treatment options are often limited and expensive.

The risk of developing failed back surgery syndrome is as high as 1 in 5 spinal surgical interventions. A study compared the annual price of treating FBSS against four other common chronic conditions including rheumatoid arthritis, osteoarthritis and fibromyalgia. Cost calculation concluded that treating FBSS cost €1802, whereas other conditions cost between €183 and €1261 per annum.

Back pain is a global epidemic. However, treatment modalities can be relatively simple. For instance, encouraging patients to regularly perform core exercises may be all that is required.

Furthermore, health professionals should invest time to educate patients regarding core strength and its protective role on the back. The medical focus should be to empower patients to self manage.