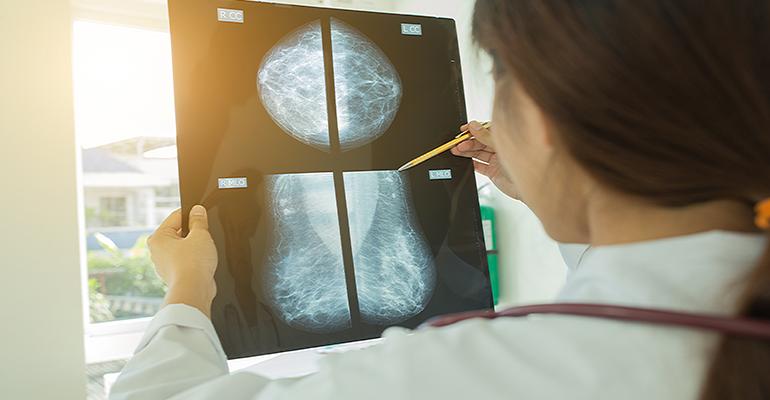 HHUS and ABUS have been shown to improve the detection rates of small size, node negative invasive cancers.

Mammography has been globally adopted as the gold standard screening examination for the early detection of breast cancer since 1970. The greatest benefit of mammography has been proven by the long-term randomised controlled trials that have shown a reduction in the mortality rate by at least 20 per cent.

However, the sensitivity and specificity of mammography is lower in women with dense breasts because the x-ray attenuation is similar between the glandular tissue and non-calcified cancers, leading to “masking effect” which increases the interval cancer rate; resulting in delayed diagnosis with worse outcomes of the disease. Additionally, numerous scientific data has shown that women with heterogeneously dense and extremely dense breasts have a relative risk of two-fold and four-fold to develop invasive breast cancer compared to women with predominantly fatty breasts. Due to its clinical importance breast density has been incorporated into Tyrer-Cuzick and Breast Cancer Surveillance Consortium risk models.

In order to overpass the limitations of mammography, an improved strategy through utilisation of supplemental screening approaches has been further considered for women with dense breasts. Hand-held breast ultrasound (HHUS) and Automated breast ultrasound systems (ABUS) have been shown to improve the detection rates of small size, node negative invasive cancers, averaging 2.1–2.7 per 1,000 women screened, which would have been otherwise missed on mammography due to breast density.

Due to the clinical importance of mammographic breast density several methods have been developed that measure various aspects of fibroglandular tissue, which include visual, semi- or fully automated approaches. Visual, qualitative methods are based on human judgement and are therefore subjective with a high inter-observer variability among radiologists. In order to provide a more precise assessment of mammographic breast density for identifying women at increased risk of developing breast cancer and/or having reduced mammographic sensitivity, a fully automated breast density method have been developed. These systems provide measurement of area-based or volumetric parameters, that is objective, consistent and reproducible.

ABUS houses high frequency transducers that provide visualisation of a large portion of the breast within one view and produces high-resolution standardised studies. After the transverse image is acquired, the software processes and reconstructs the coronal and sagittal plane providing multiplanar volumetric images, allowing the radiologist to interpret breast lesions in different planes. Meanwhile, virtual review of data sets enables batch reading, double reading, while the coronal plane provides information on the extent of the disease and demonstrates the “retraction phenomenon sign”. Additionally, storage of ABUS volumes allows to compare examinations with priors that is expected to improve specificity in follow-up examinations and to decrease biopsy rate of benign lesions.

Implementation and performance of ABUS

Multiple studies that compared the performance of ABUS technology in breast cancer detection has shown similar results to handheld ultrasound (HHUS) studies averaging 90.6 per cent and 90.8 per cent for HHUS and ABUS respectively and in some instances ABUS appeared to be superior to HHUS, especially in the context of architectural distortion identified on the coronal reconstruction plane.

Chang et al. retrospectively evaluated the detection performance of benign and malignant masses. Overall sensitivity and specificity of three readers were, respectively, 71.9 per cent and 79.5 per cent, and the sensitivity was higher for the detection of malignant masses (87.5 – 95.8 per cent) vs. benign masses (56.3 – 66.7 per cent). Mass size, shape and surrounding tissue changes were the variables affecting detectability at ABUS. The reproducibility and consistency of breast lesions across multiple readers is important for the utilisation of ABUS in the screening setting. Chang et al showed that ABUS provided reproducible images for mass localisation, size measurement, and characterisation, which may be useful for follow-up studies.

Computer-aided detection and diagnosis software can optimise the performance of ABUS. In order to improve reading time, a computer-aided detection (CAD) software for ABUS (QVCAD) have been developed and have received CE mark approval. A reader study has shown this new technology has the potential to improve the reading time with no loss in diagnostic accuracy. There has been an average of 33 per cent improved reading time among 18 radiologists in this study. The results of this study have concluded that the use of the concurrent-read QVCAD system for interpretation of screening ABUS studies of women with dense breast tissue makes interpretation significantly faster and produce non-inferior diagnostic accuracy compared to that of unaided conventional ABUS reading.

Recently, we explored the utility of Radiomic ABUS signature in the differentiation of benign from malignant breast lesions. This retrospective study included a total of 77 patients (all females) with biopsy proven lesions. Our results showed that the radiomic signature obtained from ABUS images is a promising tool in differentiating benign from malignant breast lesions, concluding that the automatic classification of these lesions could be successfully implemented using a radiomic signature extracted from ABUS images.

Furthermore, establishment of an ABUS training programme for radiologists and technicians that will provide adequate training in acquiring and interpreting 3D breast volumes data obtained by ABUS will potentially improve the sensitivity, specificity and will reduce the false negative rate.

ABUS is an emerging technology that provides an efficient, reproducible and comprehensive technique for supplemental breast screening. Novel developments of ABUS will help increase the sensitivity and specificity and will lead to more accurate diagnosis of breast cancers.