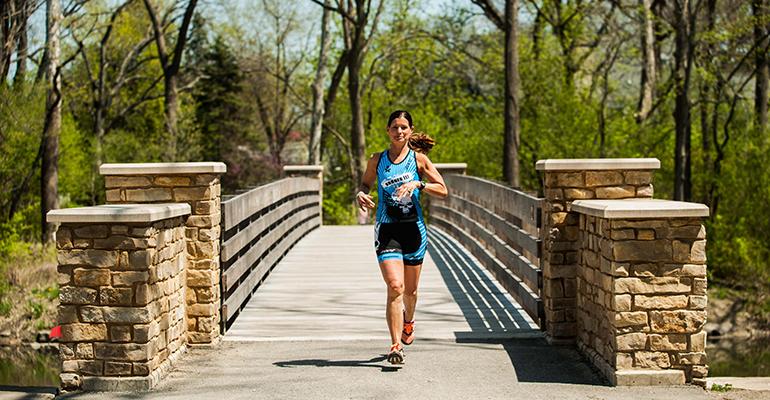 FAI occurs in individuals whose hip bones did not form normally during childhood growth and development.

The pain in Sara Llibre’s right hip was so severe, the triathlete could barely walk, much less train for a race. Hip preservation surgery at the University of Chicago Medicine returned her to Ironman form.

Over time, though, heavy training took a toll on Llibre’s right hip. An MRI showed joint damage caused by femoroacetabular impingement, or FAI — a condition in which the hip bones rub together abnormally. After one orthopaedic surgeon told Llibre she’d never run again, a fellow athlete encouraged her to get a second opinion.

“I could tell that Dr. Ho knew from my description of the pain exactly what I was dealing with,” Llibre said.

FAI occurs in individuals whose hip bones did not form normally during childhood growth and development. Structural defects result in the hip ball and socket hitting against each other. Because athletes work the hip joint frequently and vigorously, they may have damage and experience pain earlier in life than less active people.

Just a decade ago, Ho said patients with FAI were diagnosed with tendonitis or arthritis and lived with pain until the condition was advanced enough to warrant hip replacement surgery.

“Today, with better imaging tests and more sophisticated minimally invasive tools, we can diagnose patients who have impingement and tears related to FAI and treat them before they get arthritis,” Ho said. “If we treat these patients early enough, we can save the hip and allow them to continue an active, healthy lifestyle. Our job as hip preservation specialists is to maintain our patient’s natural hip and avoid the need for hip replacement later in life.”

“For athletes like Sara who want to do triathlons later in life,” he added, “the surgery can give them additional miles and years on their hips.”

Llibre said Ho didn’t promise her anything but told her the chances of her running again were good. “And he was right.”

Ho performed Llibre’s 90-minute hip preservation procedure in January 2014. She started swimming three weeks after the surgery and biking at two months. By April, she was running again.

“I got such good advice from Dr. Ho about how much I could do and when to back off,” she recalled, adding, “and I didn’t have to back off a lot.”

Today, the 60-year-old trains every day. Since her surgery, she has completed seven Ironman races, including the Ironman World Championships in Kona, Hawaii.

“I can’t tell you how many times I thanked Dr. Ho for his expertise,” she said.” I look forward to many more years of training and competing.”