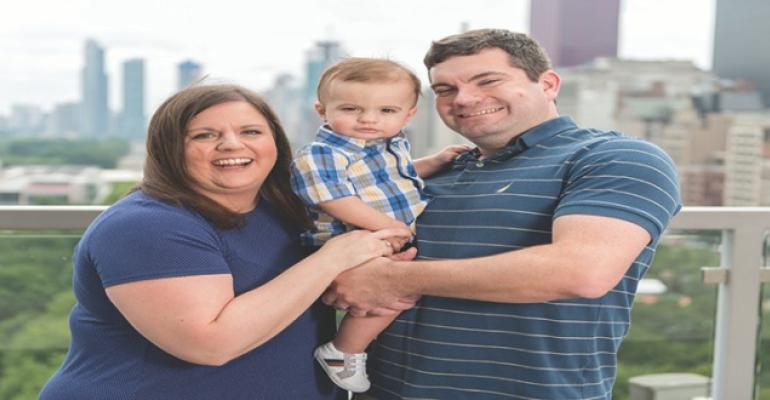 One year into their marriage, Jessica Blackford-Cleeton and her husband, Brandon Cleeton, were busy planning a future together. That included building their careers, having children and raising a family in Springfield, Illinois. However, cancer had a different plan for the couple.

It started with pain in Jessica’s lower abdomen – sometimes so severe that she twice landed in the emergency room. A CT scan showed a small spot on her abdomen. The subsequent biopsy revealed cancer, “and it was everywhere,” Blackford-Cleeton said.

Blackford-Cleeton was diagnosed with mesothelioma, a rare and aggressive cancer that affects the linings of organs. Mesothelioma most often affects the lungs, where it is linked to asbestos exposure.

“I was so scared,” Blackford-Cleeton remembered. “When I did research on the Internet, it was all grim and bad. I had very little hope.”

Also looking grim were the couple’s chances of having children, which they were trying to do at the time of her diagnosis.

“We thought, ‘Of course it isn’t going to happen,’ because the cancer was all over my ovaries,” Blackford-Cleeton said.

Her oncologist in Springfield referred her to the University of Chicago Medicine, where specialists at the Comprehensive Cancer Center have been dedicated to mesothelioma research and care for more than 25 years. Her care team included gastrointestinal oncologist and mesothelioma expert Hedy Kindler, MD, and surgical oncologist Kiran Turaga, MD.

“When we met with Dr. Turaga, we had so much more hope about the disease and how to move forward,” Blackford-Cleeton said. “We knew we would have a future at that point.”

Her treatment included surgery to remove the cancer, followed by a procedure called HIPEC (hyperthermic, or heated, intraperitoneal chemoperfusion), which targets and kills cancer cells that remain after surgery. HIPEC has fewer side effects than traditional chemotherapy because the medicine targets specific areas rather than circulating throughout the whole body. Also, the heated medicine causes blood vessels to expand, allowing the chemotherapy to penetrate deeper and more effectively.

Cleeton remembered his wife’s 14-hour procedure as being “one of the longest days of my life and probably the most terrifying.”

The surgical team successfully removed hundreds of tumors in Blackford-Cleeton’s body. They also removed an appendix, parts of her intestines and diaphragm, and an ovary. One ovary.

Going into surgery, Blackford-Cleeton and Turaga discussed the procedure’s potential impact on her fertility. “We talked about the fact that when we put heated chemotherapy inside her belly, it could change her life forever - especially her ability to have kids,” said Turaga.

She begged Turaga to save at least one ovary so she and her husband would have a chance to have a baby in the future. “He found a way,” Blackford-Cleeton said.

“When we met with Dr. Turaga, we had so much more hope about the disease and how to move forward,” Blackford-Cleeton said. “We knew we would have a future at that point.”

One year after surgery, Blackford-Cleeton was cleared to begin in vitro fertilisation. In August 2017, the couple welcomed their son, Avery. Or, as the couple jokes, “Brandon’s mini-me.”

For three years, her test results have shown no evidence of tumors. “It is a testament to how much the body can endure,” Turaga said, calling Blackford-Cleeton’s story “remarkable.” “She reminds us every day of how vital she is, of how her spirit is so strong. Cancer can’t compete with the human spirit.”

Blackford-Cleeton finds strength from her support group, including her parents, who cared for her full-time while Brandon worked and often made the six-hour round-trip drive between Springfield and Chicago for her follow-up appointments. She also connected with new friends and resources through the Mesothelioma Applied Research Foundation.

Above all, she is grateful to Brandon for helping her navigate “a new normal” and taking on extra responsibilities.

“We had to switch roles from husband and wife to patient-caregiver, where he did 99 per cent of the work just because I couldn’t,” Blackford-Cleeton said. “It’s definitely a team effort, with him being the captain and the player.”

Meanwhile, Cleeton finds his motivation in his growing family: “That little boy’s smile certainly makes me want to jump up and go that extra mile,” he said. “If I feel like I don’t have a drop of energy left in me, he’s my motivator — and so is Jessica.”

“We took the vows for better or worse, in sickness and in health,” he added. “I feel like we just step up to the plate every day, make the best of it, and appreciate everything we have.”