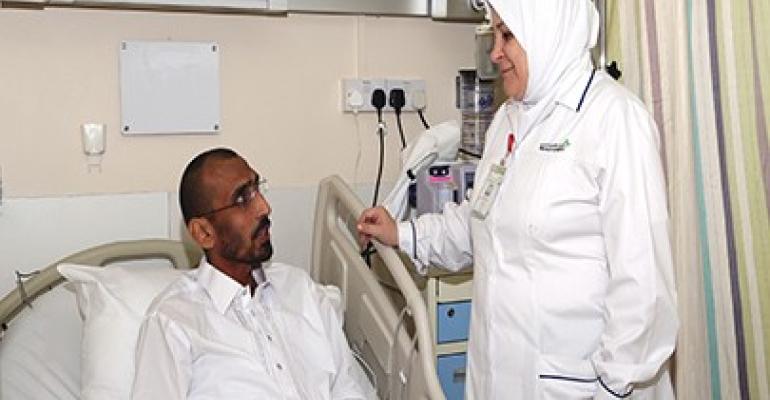 Life was going on as usual until one-day, 38-year-old engineer Ghulam Abbas needed to make a choice – life without a stomach, or death from stomach cancer.

“It’s the most devastating decision and yet the answer was clear, I had to do whatever it took to save my life. I did not want my children to grow up without my presence; I did not want to lose the opportunity to see their milestones, watch them laugh, even fight. I was not going to give up on my family and me. I just wanted to hold on to life,” said Abbas. “I had only one question. How would I be able to survive without a stomach?”

Abbas has two children, a one-and-a-half-year-old son and a six-year-old daughter. He was diagnosed with stage three cancer after he walked into Rashid Hospital’s Gastroenterology clinic complaining of sudden weight loss and vomiting.

Tests revealed he had a huge tumour that covered almost his entire stomach. Gastric cancer is the second leading cause of cancer-related death and the fourth most common cancer worldwide.

Dr Ali Khammas Alyammahi, head of general surgery and consultant laparoscopic surgeon at Rashid Hospital, said, “In young patients unfortunately we see the cancer is very aggressive. There was no option but to conduct a total gastrectomy. We decided to perform the surgery minimally invasively, which has multiple advantages as opposed to open surgery. We have performed several colon cancer surgeries using this technique but for a total gastrectomy, it was the first-of-its-kind surgery in Dubai.”

Before the surgery, doctors wanted to evaluate his response to chemotherapy.

Dr Omar Al Marzouqi, consultant laparoscopic surgeon said, “Sometimes in aggressive cancers of this kind, the tumour increases in size and spreads rapidly even while the patient is on chemotherapy. We do not expose such patients to surgery. After two months of chemotherapy at Dubai Hospital, his tumour shrunk in size, so we decided to go ahead with the surgery.”

However, Abbas was informed that chemotherapy only shrinks the tumour but leaving a cancerous tumour inside the stomach is a ticking time bomb. He was left with no option but to undergo surgery.

“I was relieved to know that it will be a minimally invasive surgery. It meant that I could have a quicker chance for recovery.”

The next day Abbas went into a five-hour surgery. Dr Al Marzouqi performed the surgery with his team. He said, “Traditionally such a surgery would involve opening up the abdomen vertically from the stomach to the pelvis, but minimally invasive surgery is the way forward in many cases as it is less invasive and leads to much faster recovery time.

“For colon cancer cases we have used this method several times, but this type of surgery was the first in Dubai. We laparoscopically removed the total stomach and the lymphatic drainage system from the root. We then reconstructed the whole area in such a way that the small bowel (small intestine) functions as the stomach.”

The surgery was a success; the pathology report showed that the surrounding area was also free of cancer-cells. “In medicine there are markers for quality assurance. In such surgeries, the minimum number of lymph nodes that need to be removed are 26; we got more than double of that, we were able to remove 56 nodes.”

Abbas is still undergoing chemotherapy at Dubai Hospital as a preventive measure.

Dr Al Marzouqi said, “It is normal to question how a person can live without a stomach. However, the body is able to bypass the stomach’s main function of storing and breaking down food to gradually pass to the intestines. Without a stomach, food consumed in small quantities can move directly from the oesophagus to the small intestine.”

Abbas needs to be very mindful of the quantities he consumes. He has to nourish his body in tiny meals throughout the day. “Here the credit goes to my wife. She meticulously prepares small meals for me and I keep track of how often I need to eat. Post the surgery I was on watery liquids and then I moved on to thick liquids. I will soon start consuming small non-spicy meals.
“I’ve adapted to this new pattern. Things could have been worse. I’m here, alive, what more could I possibly ask for?”

DHA Launches World’s First Comprehensive Healthcare Change Management Framework
DHA has designed the world’s first comprehensive healthcare change management framework and is currently highlighting this framework at international conferences. This is yet another first for the Emirate and the idea behind this framework is to have a structured three-year change management roadmap to help uplift the health sector and create a stimulating and motivating environment for employees. The framework has been designed in collaboration with GE Healthcare.

Patient care and satisfaction are at the heart of this framework and DHA officials said that patients will be able to witness noticeable improvements in the quality of health services within a year. Factors such as waiting time, appointment systems, empowering patients with digital tools such as apps etc., will be part of the changes the community can expect.

The initiative began in May this year and out of 383 applicants, 52 were selected. Of those, 48 graduated; they are now change agents to help the Authority achieve its goals in change management transformation.

HE Humaid Al Qutami, Director-General of the Dubai Health Authority said, “The healthcare transformation journey is important to create a stimulating and motivating environment for employees as well as to provide patients with the highest-quality of patient centric care and convenience. Change management is an effective way of achieving these goals in a fast and efficient manner.”

The Authority will implement several change management mechanisms that include training and education, stakeholder engagement including community engagement etc.

Dr Mohammed Al Redha, Director of Project Management Office said, “Change Management addresses cultural changes that are essential throughout the life of any healthcare organisation. The development of the framework was the first step, now we will move towards its implementation. It is a three-year project, over the course of this time we will implement and measure a number of programmes to help achieve improvements in organisational processes, methodology, healthcare provision as well as patient care and satisfaction.”

He said the core of the transformation strategy is to ensure better patient outcomes and to contribute to improved community healthcare. “Change management is necessary for all organisations and the way forward to achieve effective management and optimal services.”