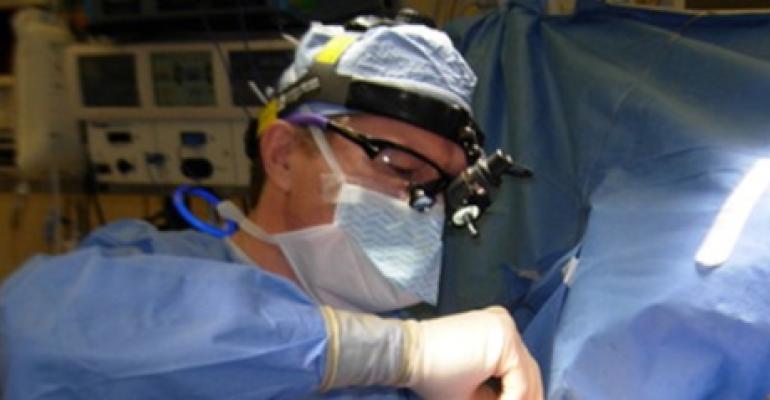 Having performed more than 15,000 cardiac operations and over 6,000 minimally invasive surgeries, and consistently having one of the lowest morbidity and mortality rates across the US, Dr Joseph Lamelas, Professor and Associate Chief of Cardiac Surgery at Baylor St Luke’s Medical Center/Texas Heart Institute, is a pioneer in the most advanced forms of Minimally Invasive Cardiac Surgery.

Even as a young child, Dr Joseph Lamelas recalls that he knew his calling in life would have “something to do with my hands”. Fond of painting and sculpture in his growing years in West Palm Beach and New York, he eventually specialised in general surgery and then in cardiac surgery which ultimately paved the way for his pioneering role in advanced forms of minimally invasive cardiac surgery. Thereafter, his dexterous operative techniques led to the development and subsequent refinement of the now popular ‘Miami Method’ for minimally invasive cardiac surgery.

Currently Associate Chief of Cardiac Surgery at Baylor St Luke’s Medical Center/Texas Heart Institute, Dr Lamelas says that it was his desire to challenge his skills as a surgeon and improve patient outcomes by tapping into the new advances in the field of cardiac surgery that led him on the path of approaching surgery in an innovative way. “Around 2004, when I was practicing in Miami, there were several doctors across the US doing minimally invasive techniques in cardiac surgery. They all performed it in differently. With this background, I evolved and developed my own technique. Initially only performing the procedure on high-risk and extremely frail patients, I was intrigued to see the excellent results.”

Immediate and positive results encouraged him to perform the procedure on low-risk and asymptomatic patients who, he says, “fared even better.”

The so-called ‘Miami Method’ which Dr Lamelas has honed and is still evolving, is thus a Minimally Invasive Valve Repair and Replacementapproach that was initially limited to the aortic valve alone. “It has since been expanded to facilitate minimally invasive approaches for repairing both simple and complex congenital cardiac defects, removal of cardiac tumours, mitral valve surgery, double and triple valve surgery, as well as replacing the ascending aorta without splitting the sternum,” he says. “Unlike the traditional method of fully opening the breast bone, the technique I have developed involves making only a small 2-inch incision on the right side of the chest, between the ribs, which gives access to and exposure of the heart chambers and valves. With this approach you don’t even have to break the ribs or go through the bone and there is absolutely no manipulation of the heart.”

Amongst the most significant advantages of such a surgery is that because of less trauma to the tissues and the heart, patients require a shorter stay in both the ICU and the hospital and, return to a full and normal level of activity is far quicker. “Even with high-risk patients and those with multiple comorbidities, we have seen that the hospital stay is usually just 3 days, while a full recovery occurs within 2 weeks,” he says.

Dr Lamelas has performed more than 15,000 cardiac operations and more than 6,000 minimally invasive surgeries since he began his career as a surgeon in 1990. More than 500 cardiac surgeons worldwide have observed him in the operating room to learn about his advanced and innovative surgical techniques. He has also taught his surgical approach via live case demonstrations and through peer to peer courses.

Although minimally invasive surgery brings immense benefits to the patient, for the surgeons, this is seen as a challenging operation. According to Dr Lamelas, “Incorporating this new technique which involves viewing the heart from a different angle and with limited vision is not easy for surgeons who are accustomed to operating with the chest wide open. This brings a whole different perspective of the way the heart looks from a small incision and from the right side of the body. In addition, you need specialised equipment and instruments that are so different from the conventional ones.”

The modified tools are quite long, which allow the reach needed to operate through a narrow opening. “It’s almost like working with really long chopsticks,” admits Dr Lamelas. “Therefore, precision and steadiness of hand are key to the success of the surgery.”

However, he believes that the technique he practices is still in a continuous mode of evolution. “I do not believe in perfection; there is no such thing as perfecting a skill,” he says. “The technique I started with in 2004 is vastly different from the way I do it today; it has evolved over time. For me, this has been a very interesting journey but at the heart of it is the idea that each improvement in the technique should conform to the primary goals of simplicity and reproducibility. There is no point in complicating a procedure that is meant to improve patient outcomes.”

One of the main challenges he faced in the early days was to create the tools and exposure devices to facilitate minimally invasive procedures as no medical device manufacturer was keen to support his ideas. “The concept took shape when a patient of mine, who happened to be an engineer, decided to implement my ideas into fruition. As a patient, he also wanted to give back to others, firmly believing that it could help more people with complex cardiac issues like his,” remembers Dr Lamelas.

The ensuing result was Miami Instruments, Inc., a collaborative venture for the design and development of new and innovative concepts and products for advancing the field of minimally invasive cardiac surgery.

Over the years, Dr Lamelas has consistently had one of the lowest morbidity and mortality rates in the US, drawing patients from around the globe to benefit from his expertise. “One important point that I have learned with this specific operation is that there is no room for error,” he says. “Unlike the sternotomy approach, only a tiny area is exposed.  Moreover, this is a very detailed operation where you are required to perform each step in its order; you cannot go back. Every day is therefore a learning curve, and every day I learn something new.”

Surgeons should first be comfortable with general cardiac surgery before they embark on practicing the minimally invasive technique, he asserts, adding, it would take 50-75 operations before one begins to become proficient in both the technique and the procedure.

Surgery is not a science; it is also an art, believes Dr Lamelas. “As cardiac surgeons, we work on a three-dimensional object that is in a static state. We have to stop the heart to perform the surgery, and this in itself is one of the main challenges for a surgeon – for what you do to the heart in that state could take a completely different dimension when the heart starts pumping and becomes dynamic. Advances in imaging technology are therefore crucial for cardiac specialists as it guides us in how and what we do, and I believe, this vastly expanding field will help the cause of medicine in the future.”

Born in 1960 in Cuba, Joseph Lamelas’ parents emigrated to the US following the Cuban missile crisis, beginning their life from scratch in Miami where they settled down. Doing all forms of manual labour to support his family, the senior Lamelas constantly emphasised the importance of a good education. Having lost his house, wealth and all his hard-earned assets when he fled the country, he always insisted that ‘Governments can take everything away from you, but they can never take away your education’.

“My parents are the pillars of my success,” says Dr Joseph Lamelas. “Very early on in childhood, they instilled in us the value of hard work and education, and I believe my work ethic comes from them. They had walked away from a comfortable life with just the clothes on their back, but their sheer determination and resilience helped them survive some very tough times. Working hard and challenging myself were traits ingrained in me from a very young age.”

His wife, Shay, a nursing practitioner who assists him in his work, has been the perfect anchor to balance his personal and professional lives, he adds. “We have been working together for more than 20 years, and as she knows exactly what to look for in a patient before and after the surgery, her assistance is truly invaluable in the work I do. In fact, even over the dinner table, our conversations center around our patients!”

Dr Lamelas obtained his medical degree in the Dominican Republic and completed his general surgery residency at The Brooklyn Hospital Center in Brooklyn, New York, and his Cardiovascular and Thoracic Surgery residency at The State University of New York Health Science Center in Brooklyn, New York. After his training, he moved to Miami, Florida where he was in practice for 26 years. From 2008-2016 he served as the Chief of Cardiac Surgery at Mount Sinai Medical Center in Miami Beach, Florida. It was in January 2017 that Dr Lamelas moved to Houston, Texas to join the Baylor College of Medicine, CHI St Luke’s Medical Center, Texas Heart Institute as the Associate Chief of the Division of Cardiothoracic Surgery.

“To serve in the same department once headed by Dr Michael DeBakey, the pioneer of modern cardiac surgery, is an extremely great honour,” he says. “Together with my colleagues, I hope to be able to continue the legacy of the Texas Heart Institute and further develop my surgical techniques and pass on unique ideas and new skills to the next generation of surgeons.”

Dedication to one’s work is the most important quality of a surgeon, he adds. “Team it up with compassion and continuous education, and you have the perfect recipe for success in this profession.”

His passion for cardiac surgery, explains Dr Lamelas, stems from the fact that “this is one of the few specialties where you can perform an extensive operation on a patient, and you see an immediate result the very next day. This, for me, ranks as the most immediate return on investment and definitely the biggest reward a surgeon can ever hope to achieve.”