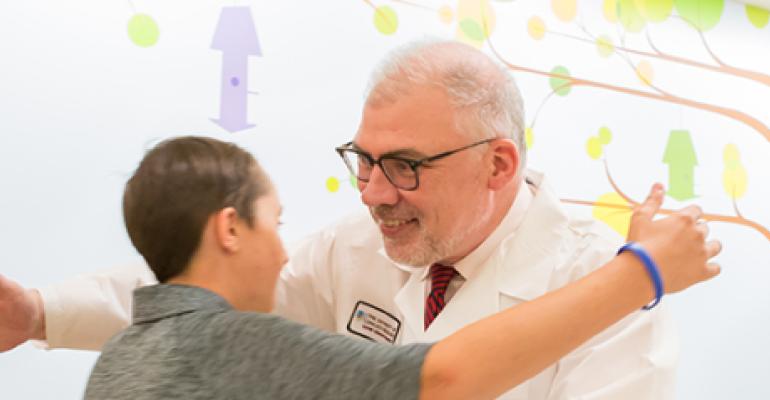 Suzie Tinaglia watched as her son Sam, 18, chose which T-shirts from his favourite Chicago sports teams to pack for college. Going away to school was a milestone she didn’t expect the oldest of her three children to reach.

“Our family went through 12 years of living through cancer,” Suzie said. “With each diagnosis and recurrence, we stopped everything. We never knew what was around the corner.”

Thanks to CAR T-cell therapy, a revolutionary new treatment for advanced blood cancers in children and adults, Sam’s future looks bright. He was one of the first 100 children in America to participate in clinical trials of the gene cell therapy, a revolutionary new blood cancer treatment approved by the U.S. Food and Drug Administration in late August. The University of Chicago Medicine’s Comer Children’s Hospital is among the first sites in the U.S. to offer the treatment, which works by using modified versions of a patient’s own blood cells to target and destroy cancer cells.

Sam was diagnosed with B-cell acute lymphoblastic leukemia (ALL) in 2003 at age 5. Doctors believed the standard treatment – three years of outpatient chemotherapy – would be effective in putting the leukemia into remission.  For most children with ALL, this first line therapy is successful.

But Sam was among the 20 percent of children with ALL who relapse after initial treatment. When he was close to the five-year mark of being in remission, leukemia cells were found in his bone marrow. His Comer Children’s medical team, led by John M. Cunningham, MD, began a more aggressive approach to treating the disease. In the years that followed, more rounds of chemotherapy and a bone marrow transplant brought short remissions, but failed to eliminate the cancer. When the cancer came back again, it was in his central nervous system.

“At that point, we were sure we had reached the end,” Suzie said. “We thought the cancer was never going to go away.”

But then Cunningham told the Tinaglia family that Sam was eligible for a CAR T-cell therapy clinical trial at Children’s Hospital of Philadelphia (CHOP). “He called it a groundbreaking procedure, that had shown incredible success rates in kids like Sam, who had recurrent leukemia,” Suzie said. CAR, or chimeric antigen receptor, T-cell therapy is a type of cancer immunotherapy that involves genetically engineering a patient’s disease-fighting T-cells, rewiring them to seek out, recognise and attack cancer cells. Scientists refer to CAR T as a “living drug”.

“CAR T-cell therapy is filling a gap in the goal we have of curing every child with acute lymphoblastic leukemia,” Cunningham said. “We've been looking for a treatment like this for more than 30 years.”

Cunningham referred Sam to CHOP and the Tinaglias arrived in Philadelphia – anxious but hopeful — in the fall of 2015.

Sam’s T-cells were collected through apheresis, a non-invasive process (similar to donating blood). In a laboratory, scientists modified the cells, supercharging them to seek out a protein found on leukemia cells. After the CAR T-cells multiplied into the millions, they were returned to Sam’s blood stream where they began fighting the cancer.

Soon after the infusion, Sam experienced some of the serious side effects associated with the treatment. Cytokine-release syndrome (CRS) brought on high fevers, fluctuating blood pressure, temporary memory loss and seizures. Also known as a cytokine storm, CRS is the result of T-cell activation, so it was a positive sign that the attacker T-cells were performing.

“We went into it expecting that something like this could happen,” Suzie said, “but we also knew it meant the treatment was working. And we needed this treatment to work.” Following a week’s stay in a paediatric intensive care unit, Sam recovered.

“Nothing difficult came after the storm,” he said. “Once it was over, I was done with cancer treatment. No more chemotherapy. No more medications. The CAR T-cells really did the job. They’ve been working ever since.

Sam’s love of sports, especially the Cubs, helped him endure the cancer relapses and treatments throughout his childhood. In October 2016, as he marked his one-year anniversary of CAR T treatment, the Cubs won the World Series. His family celebrated both unexpected victories.

“We never thought we’d get to this point,” said Suzie. “CAR T-cell therapy was the exact treatment he needed. We are so thankful it worked out.”