Use of multigene panel testing in molecular diagnostics of cancers 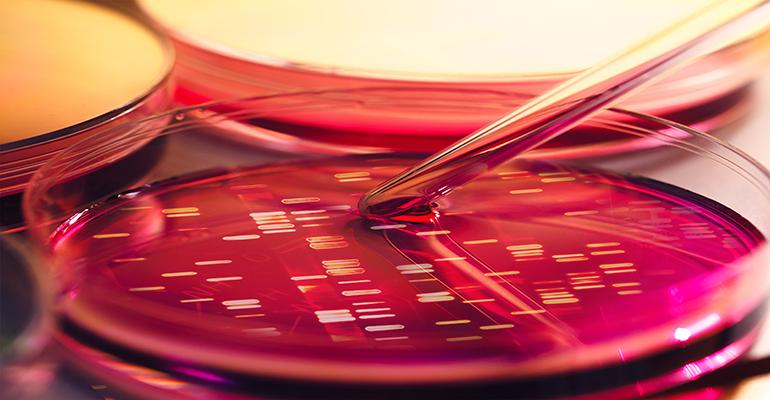 Multigene panel (MGP) testing has re-defined the optimal care of patients with cancer.

Molecular (or genetic) testing plays an important role in cancer diagnostics. A good example of a molecular genetic test used to diagnose cancer is the DNA analysis of Breast Cancer susceptibility gene 1 (BRCA1) and Breast Cancer susceptibility gene 2 (BRCA2), mutations which can increase the risk of breast, ovarian, and several other cancers. This type of testing came into the limelight following Angeline Jolie’s public disclosure of her BRCA1 pathogenic mutation, which resulted in a spike in breast cancer genetic testing that experts described as the “Angelina Jolie effect”.

Traditionally, identification of genetic cancer risk has been performed through single-gene testing in a stepwise manner using Sanger sequencing. The introduction of next-generation sequencing (NGS) in molecular diagnostics added more layers of complexity to clinical decision-making for clinicians. Presently, clinicians have to choose between single-gene testing, multigene panel (MGP) testing or even whole-exome sequencing (WES) for their first-tier clinical diagnostic test.

A single-gene assay is indicated in cases when the clinical diagnosis is obvious and only confirmation testing is required. Nevertheless, high cost, longer time, and the laboriousness of the approach shifted cancer testing to the MGP. MGP testing refers to the concurrent sequencing of multiple pre-selected genes for the detection of actionable DNA variants.

The introduction of MGP testing in cancer diagnostics quickly changed the clinical landscape for cancer patients and their families. Not only did it contribute to the management of the condition in patients, but it also helped with the risk management and reduction of the disease in risk group individuals.

There are many MGPs employed in cancer diagnostics today, some of which are used for the detection of pathogenic alterations in risk individuals or individuals with a history of breast cancer, the most common cancer among women and a high cause of mortality worldwide according to the World Health Organization. With the majority of cases of hereditary breast and ovarian cancers being caused by germline mutations in the BRCA1 and BRCA2 genes, many women at an increased risk of the disease and who had previously tested negative for pathogenic mutations in both genes had finally pathogenic variants of other breast cancer-related genes detected through the MGP approach. In fact, many studies highlight the utility of multigene panels in patients with a history of negative BRCA1/2 genetic testing.

One such study shows that using the MGP approach in patients who had previously tested negative for mutations in BRCA1 and BRCA2 genes improved identification of pathogenic variants in other genes that cause breast or ovarian cancer susceptibility at a detection rate ranging between 2.9 and 9.3 per cent. Another advantage of MGP is the decreasing cost of genetic testing due to NGS technology. Because the price of ordering a genetic test was the same regardless of the number of genes on the panel, test selection is dependent only on patient and provider preferences, rather than price. Despite the many documented advantages of the MGP approach, the technique has still faced certain criticism by the scientific and clinical community.

In MGP testing, genes without strong ties to the corresponding cancer syndrome can be added to the panel, which increases the risk of overestimating the clinical implications of a result. Additionally, this type of testing can increase the detection rate of variants of uncertain clinical significance (VUS) for which management is unclear. This highlights the importance of variant annotation and interpretation pipelines to prioritise the variants properly. Other problems and challenges associated with MGP testing include the identification of secondary findings, whereby unexpected deleterious variants in genes associated with conditions other than the ones originally tested for are detected. This may be useful however if the patient’s family history is unknown or limited. Whole exome sequencing (WES) is another molecular genetic testing approach that is used when MGP does not help. In fact, one important disadvantage of targeted multigene panels is that they may become outdated relatively quickly.

During the time in which a panel is developed and validated for clinical use, new studies identifying newly characterised disease genes are already being published. As such, an advantage of WES is the ability to sequence the entire protein-coding regions of the human genome, at once, allowing for the assessment and analysis interpretation and re-interpretation of alterations in all genes. WES also allows the analysis of a significantly larger number of genes at a reasonable cost, the potential to identify novel genes, and the ability to sequence the exomes of multiple family members simultaneously if needed. As a matter of comparison, MGP provides nearly 100 per cent coverage in targeted genes, WES has a unique advantage of analysing a much broader gene list, including newly reported disease genes.

A recent study demonstrated that WES improved diagnostic rate in 8 per cent of patients who first underwent multigene panel testing. Phenotype-driven WES interpretation also greatly reduced the rates of uncertain results. As such, if high cancer risk is present but the specific syndrome is uncertain, WES can be the method of choice. It is worth to mention that WES shares with MGP increased rate of detection of VUS and incidental (secondary) findings. The choice between the different genetic testing approaches depends on each case.

The MGP approach is ideal for analysing specific mutations or genes that have suspected associations with disease. In addition, focusing on individual genes or gene regions provides a higher depth of sequencing than WES, which then enables the identification of rare variants. WES, on the other hand, allows for a comprehensive analysis of the whole exome, which is especially important if genes of interest are unknown. This method is also highly likely to play an increasingly important and powerful role in cancer diagnostics.

Although the choice of testing approaches for the identification of genomic risks might raise some questions, it is certain that the use of multigene testing in the clinical setting has re-defined both the optimal care of patients with cancer and the management of unaffected individuals. This is made possible because it ultimately allows for surveillance programmes, planning strategies of prevention and early intervention for enhanced patient management. It is very important that any future progress made in the genetic testing space is accompanied by a deep understanding and awareness of the implications of its potential by both physicians and patients.