Uromodulin – A new dawn for an old biomarker 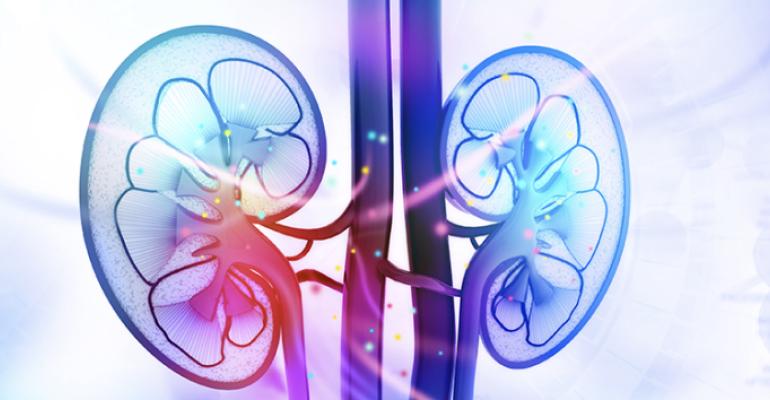 The kidney marker uromodulin is experiencing a renaissance. Although first identified over 60 years ago, the protein languished until recently, when new research propelled it back into the spotlight. Uromodulin is directly linked to kidney function and its measurement can identify chronic kidney disease (CKD), even at the early stages. It is, moreover, a promising predictive marker for CKD, renal transplant outcome and cardiovascular disease.

About 600 million people worldwide have CKD, corresponding to about 1 in 10 of the population. Major risk factors for developing CKD include diabetes mellitus, hypertension, cardiovascular disease, obesity and increased age. Early CKD has no signs or symptoms and is considered a silent killer. Undetected CKD leads to progressive damage to the kidneys and loss of renal function.

CKD is divided into five stages, progressing from normal renal function despite kidney damage (stage 1), through mild (stage 2), moderate (stage 3) and severe (stage 4) impairment to renal failure (stage 5) requiring dialysis and/or transplantation. If CKD is detected early and managed appropriately, the deterioration in renal function can be slowed or even stopped. Treatment also helps to reduce the risk of associated complications such as cardiovascular disease. Thus, early detection of CKD is of huge benefit both in terms of patient outcome and healthcare cost savings.

Renal function is expressed as the glomerular filtration rate (GFR), which decreases as the disease progresses. Determination of GFR using exogenous and endogenous filtration markers is reliable, but is laborious, time-consuming and costly, and is therefore only indicated in risk patients. Determination of creatinine clearance, moreover, requires the collection of 24-hour urine. A simpler but less reliable method is estimation of the GFR (eGFR) by measuring the endogenous filtration markers creatinine and cystatin C in serum. These proteins increase due to retention as renal function diminishes. However, creatinine and cystatin C are not exclusively produced in the kidneys, but in all muscle cells or all cell nuclei, respectively. Therefore, factors such as body weight, nutrition or muscle mass have to be taken into account in the measurement, requiring complicated additional calculations. Exceptional circumstances such as extreme body size, non-conventional dietary intake (e.g. vegetarian diet, high-protein diet), skeletal muscle disease, paraplegia and amputated limbs can limit the reliability of the eGFR. Critically, creatinine does not provide a sufficiently sensitive response to early-stage kidney damage. The GFR can be reduced by as much as 50% while the serum creatinine value remains in the normal range. This so-called creatinine-blind area hinders the diagnosis of CKD in its early stages. Hence, new markers for early diagnosis of renal dysfunction are urgently needed.

Uromodulin is a glycoprotein which is synthesised exclusively in the kidneys, namely in the epithelial cells lining the thick ascending limb of the loop of Henlé (Figure 1). This region of the kidney is particularly sensitive to damage by lack of oxygen, inflammation, chemicals or pharmaceutical drugs. Uromodulin is secreted into both the tubular lumen and the blood. It is by far the most abundant protein in normal urine, while in serum the concentration is about a thousand times lower. The function of uromodulin is not completely understood. In urine, it plays a role in prevention of urinary tract infections and kidney stones, regulation of transport processes and activation of innate immunity. Its role in serum remains unsolved.

Interest in uromodulin was reawakened when genetic studies showed that a faulty uromodulin gene is strongly linked to CKD. Uromodulin is now at the centre of a frenzy of research to elucidate its function and its potential as a diagnostic marker. A multitude of studies have demonstrated its usefulness for diagnosing early-stage CKD, predicting outcomes of CKD and renal transplantation, and monitoring kidney vitality in other conditions.

It is crucial not just to identify patients with CKD early on, but also to recognise those most likely to progress rapidly, in order to try to slow down the process or prepare the patient for renal replacement therapy. Patients with lower serum uromodulin have a generally poorer outcome and are more likely to progress to end-stage renal disease. Thus, uromodulin is also a helpful prognostic marker for CKD. Uromodulin is, moreover, a predictor of overall mortality in CKD patients. Individuals with low serum uromodulin have a significantly higher risk of dying from cardiovascular diseases and also other causes, possibly due to its anti-inflammatory potential.

In transplant patients, serum uromodulin can serve as a predictive marker. If the uromodulin level does not reach a certain value within a few days after renal transplantation, there is generally early failure of the graft. Uromodulin may also distinguish immediate graft function (IGF) from delayed graft function (DGF). This was demonstrated retrospectively in transplant patients with different outcomes (Figure 3). All patients had undetectable uromodulin prior to transplantation due to end-stage renal disease. Both IGF and DGF patients exhibited an initial rise in uromodulin up to day five following transplantation. In IGF patients the concentration continued to rise, reaching a stable level. In DGF patients, who subsequently required additional haemodialysis treatment, the uromodulin levelled off at a lower value. Thus, uromodulin may be a sensitive indicator of kidney graft dysfunction.

Low concentrations of serum uromodulin are also associated with a clearly increased risk of heart and vascular diseases. This was demonstrated in a recent study using blood samples from over 3000 participants of the Ludwigshafen Risk and Cardiovascular Health (LURIC) study, who were referred for coronary angiography. The participants were monitored over a period of 10 years on average. Patients with low uromodulin showed a higher rate of accompanying diseases such as diabetes mellitus, high blood pressure and coronary failure. Furthermore, overall mortality was about twofold higher in patients with very low uromodulin. This association was independent of other cardiovascular risk factors, including eGFR. Adding serum uromodulin to established cardiovascular risk prediction scores improved risk prediction, especially in participants without prior history of cardiovascular disease.

Uromodulin is traditionally determined in urine samples. However, the polymeric urinary form of the molecule causes preanalytical limitations, impairing the precision and reliability of the measurements. In serum, uromodulin is present in a stable form, most likely as a monomer, and serum measurements are highly reliable.

Uromodulin can be measured efficiently in serum or plasma using enzyme-linked immunosorbent assays (ELISA) based on microplates coated with anti-uromodulin antibodies. The patient uromodulin concentrations are established using a simple cut-off-based interpretation. External factors such as body weight, nutrition or muscle mass do not have to be factored into the results by additional calculations, as with classic markers. This makes it a fast, easy and sensitive test for the early identification of nephropathies and loss in renal function. ELISA is, moreover, suitable for high-throughput processing. Currently two commercial ELISAs are available for IVD determination of uromodulin in serum or plasma. The two ELISAs show a good correlation with each other.

Normal values for serum uromodulin were assessed using panels of healthy blood donors. Values were found to be higher in women than in men. In 190 healthy adult blood donors, the median value amounted to 188 ng/ml in males and 230 ng/ml in females. Children and adolescents exhibited comparable values to adults, with a median of 193 ng/ml observed in 443 healthy donors. The levels did not differ between girls and boys.

Uromodulin has enormous future potential as a universal marker of kidney health. It closes the diagnostic gaps of established kidney function markers, in particular for the early diagnosis of CKD. It is also a useful predictive marker for end-stage renal failure and renal graft outcome. Huge swathes of the global population are at increased risk of CKD due to rising prevalences of diabetes mellitus, obesity, hypertension and cardiovascular disease. Ageing populations will also result in more cases of CKD. Uromodulin testing will play a valuable future role in identifying and monitoring patients, and may help to limit the overall burden of kidney disease.

Figure 1. Synthesis and release of uromodulin 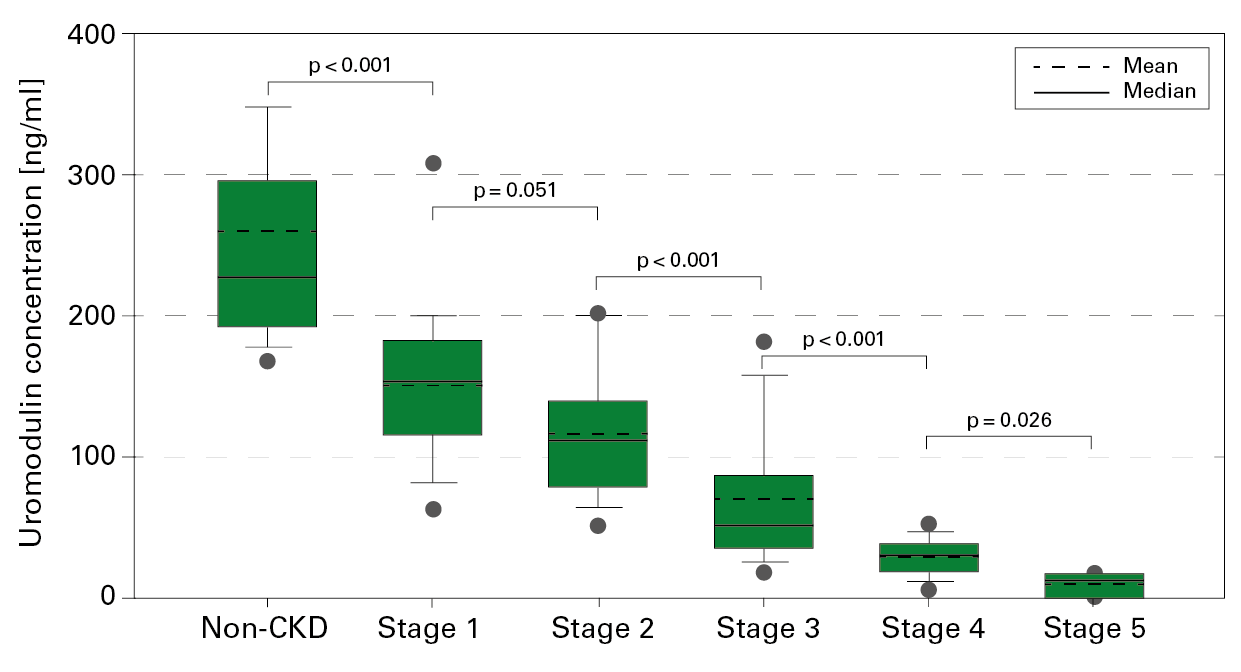