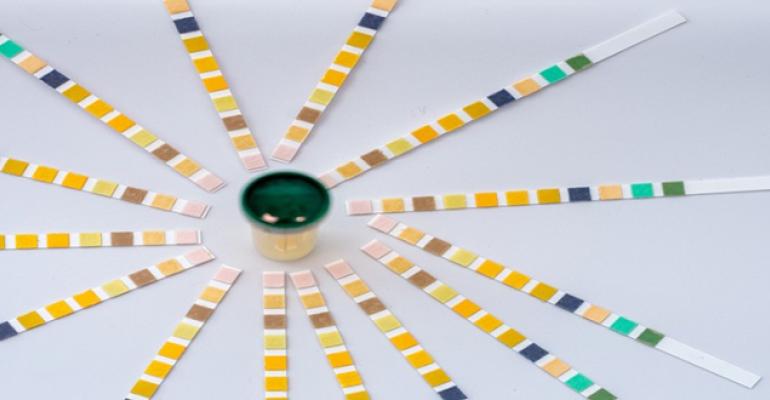 Urinalysis is a major diagnostic screening test in the modern clinical laboratory. Until recently, microscopic sediment analysis was the most popular urinalysis methodology. However, this time-consuming method has been associated with an important analytical error. Although urinary test strips were introduced in 1957, over the past two decades, advancing electronics and informatics have created new technical possibilities. This review summarises the major ongoing developments in urine test strip analysis and future developments.

Although the chemical technology for urinary test strips has only made a moderate progress over time, advances in the field of electronic detectors have considerably increased the analytical sensitivity of commercial test strip readers. As early as 2002, Penders already demonstrated that automated urine test strip reading enables quantitative analysis for red blood cells (RBCs), white blood cells (WBCs), glucosuria and proteinuria. The reciprocal value of the quantitative reflectance result is proportional to the concentration of the urinary analyte. Quantitative applications of such strip readings have been described for both ketones and albumin.

A traditional tetrabromophenol blue dye-binding based albuminuria test strip in combination with a metal oxide semiconductor (CMOS) based urine strip reader could allow quantitative analysis of albuminuria and the determination of the albumin:creatinine ratio. This approach enables for the first-time quantitative albuminuria readings, even in the microalbuminuria range (20 - 200 mg/L). Concomitantly, the creatinine test pad on the same strip allows to correct (micro) albumin results for sample dilution, which is helpful in the clinical interpretation. Applying the same CMOS technology, very sensitive readings can also be obtained for WBC (leukocyte esterase activity) and RBC (peroxidase activity). Also, for WBC and RBC, reflectance data can be used quantitatively, enabling an excellent sensitivity for these analytes. A noteworthy evolution is the potential use of smartphones for interpreting urine test strip results. Mobile platforms have been proposed, combining urinalysis strips and a pocket-sized strip reader, capable of transmitting data via a smartphone.

Urine flow cytometers (UFCs) have improved accuracy and allow significant reduction of labour costs. A popular approach is combining test strips with UFCs for screening purposes either using both strips and UFC or by utilising the urine strips for parameters unrelated to the UFC-analysed particles. As mechanical coupling of UFCs and test strip readers has been introduced, expert systems now take advantage of the combined information and apply user – definable decision criteria. This implementation significantly reduces microscopy review rates and saves time and labour cost.

Rate of diuresis is characterised by an important biological variation. As precision of urinalysis has considerably increased over time, correcting for urinary dilution has become of growing importance in the interpretation of urinalysis test results. As diuresis variability is a major pre-analytical confounding factor in urinalysis, a number of reference parameters have been introduced to assess urinary dilution and the patient’s hydration status. The commonly used reference parameters in urine are conductivity, specific gravity (density), and creatinine. Specific gravity can be measured using either urine test strips or refractometry.

In view of the great demand for the development of cost-effective portable readers, pocket-sized urine strip readers can be combined with dipsticks in a device that is capable to send digital information using a smartphone, offering a solution for detecting urological or nephrological diseases in regions with limited availability of experts. Advances in microfluidics have enabled the development of chip-based assays, which might change urinalysis in the years to come. Alongside conventional urinalysis applications integrated microfluidic chips show promise for the quantitative detection of bladder cancer cells in urine. Similarly, microfluidic paper devices have been described for detecting bacteria causing UTIs and sexually transmitted diseases in urine specimens.

Over the past 20 years, automated urinalysis has undergone a technical evolution. In this respect, automated test strip reading provides added value. Further integration of existing technologies may contribute to reduce turn-around times. Consolidation of clinical laboratories has also led to a reduction of their number and has increased the distance between patient and laboratory.

Despite continuous improvements in the field of standardisation, the lion share of errors in urinalysis occurs in the pre-analytical phase, which have become more vulnerable. As analytical variation has been greatly reduced, more efforts need to be spent on pre-analytical issues in the future.