Progress in the Management of Acute Cholecystitis and the Difficult Cholecystectomy 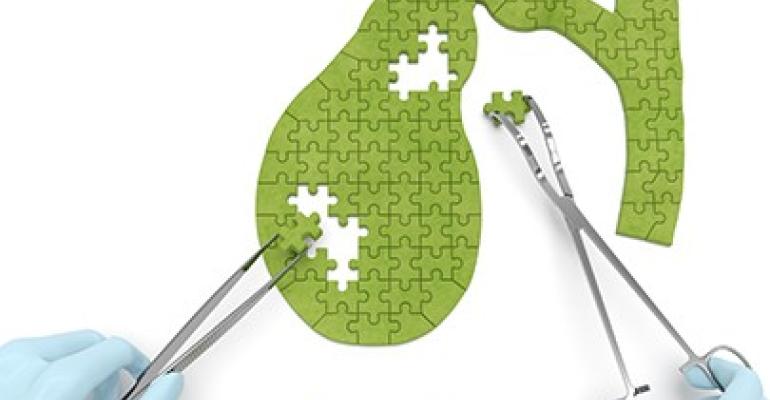 The management of acute cholecystitis (AC) continues to evolve. When possible, laparoscopic cholecystectomy (LC), introduced nearly three decades ago, is the treatment of choice. Early in the disease course, LC is a relatively simple procedure. However, as the disease evolves, the operation becomes increasingly difficult and can require truly advanced laparoscopic skills and may be most appropriately performed at specialised centres.

Today, nearly a quarter million cholecystectomies are performed for acute cholecystits each year in the U.S. About 85 per cent are started laparoscopically although around 10 per cent of these are converted to open cholecystomy because of technical difficulties. Open cholecystectomy is associated with a 1.3-fold increase in operative morbidity.

Although we continue to make progress in managing this relatively common disease, several important questions remain unanswered. A recent consensus conference on preventing bile duct injury (BDI), organised under the auspices of the Society of American Gastrointestinal Endoscopic Surgeons (SAGES), and endorsed by the Society for Surgery of the Alimentary Tract and the American and International Hepato-Pancreato-Biliary Associations, assessed our progress and developed, when possible, consensus guidelines or recommended further study of unresolved issues.

Although these recommendations have not yet been finalised, the areas of discussion are informative.

Establishing the Diagnosis and Grading the Severity of Cholecystitis

Establishing the diagnosis and the severity of the cholecystitis was one area of discussion. In particular, we still have no objective diagnostic or grading system that, at least in the U.S., accurately establishes the diagnosis or predicts the difficult cholecystectomy when alternative treatment options should be considered.

Ideally, based on the characteristics of the disease at presentation, management decisions would be tailored to the needs of the patient. A number of algorithms have been devised to accomplish this; perhaps most widely known is the Tokyo Guidelines, which were first developed in 2007 and subsequently revised in 2013 and 2018. These provide treatment criteria for diagnosis (No diagnosis, Suspected, Definitive) and establish the AC severity (Grade I mild, Grade II moderate, and Grade III severe). Primary drivers of higher grade include the presence of organ dysfunction, increased local inflammation, elevated white blood cell count, longer duration of symptoms, and the presence of a palpable, tender gallbladder. The 2018 version incorporates the Charlson Comorbidity Index and American Society of Anesthesiologists Physical Status Classification into the grading to distinguish between candidates for immediate LC, conservative management, and percutaneous drainage.

While these criteria have been validated in Japan and provide a framework to emulate, they have not proved as useful in the U.S. For example, one recent study from the University of Arizona analysed a three-year prospective database of 857 patients with suspected AC. Comparing Tokyo Guideline Criteria with the gallbladder pathology, they found that 45 per cent of the patients with severe local inflammation, including gangrenous cholecystitis, did not meet the Tokyo criteria for diagnosis. The overall sensitivity of the Tokyo Guidelines for cholecytitis was only 53.4 per cent. These results suggest that we need a set of diagnostic and grading criteria that is validated for the specific population being treated.

Another area of discussion at the Consensus Conference was the role of conservative therapy with antibiotics. With time from the onset of illness, the inflammatory process increases, creating an adhesive mass that can present a formidable challenge to approach with the laparoscope and even using open techniques. There is data to suggest that, with time after the onset of illness, the morbidity, mortality, and cost of LC all increase.

It has been the standard to operate early if the patient presents within 72 hours but, if the disease has progressed longer, to treat the patient with intravenous antibiotics and allow the inflammatory process to subside, the surgery should be delayed for at least four to six weeks. Multiple randomised trials and meta-analyses have suggested that, comparing these approaches, early surgery is associated with a shorter overall hospitalisation and hospital cost and nearly 20 per cent of patients who are managed conservatively develop persistent or recurrent symptoms prior to surgical intervention. There do not appear to be differences between the approaches in conversion rate to open cholecystectomy or morbidity and mortality including BDI. At least one randomised trial examined outcomes for patients with symptom onset of greater than 72 hours and found that, compared with conservative therapy, LC was associated with significantly lower overall morbidity, hospital stay and cost with no significant differences in conversion rates or in the incidence of BDI.

This issue deserves further study and perhaps a rethinking of the traditional 72- hour cut-off for proceeding with LC.

The appropriate use of percutaneous cholecystostomy (PC) is another area that needs better definition. In patients with severe disease undergoing PC, the acute symptoms and inflammatory signs resolve in most patients although gangrenous cholecystitis is a contraindication and the drain must usually be left in place until cholecystectomy. LC after percutaneous cholecystostomy is still a more difficult procedure with high conversion rates. The general consensus has been that PC is best reserved for high risk elderly and critically ill patients in whom PC has been suggested to reduce the morbidity and mortality of LC.

However, recent data have raised questions about the wisdom of such an approach. For example, a review of Medicare data from 1996-2010 in patients with cholecystitis and organ failure found that patients who underwent PC were less likely to ever undergo cholecystectomy and had higher readmission and mortality rates than propensity matched patients undergoing LC. Likewise, a randomised trial of LC versus PC from the Netherlands in patients with APACHE II scores of greater than 7 was abandoned after patients undergoing PC were found to have higher morbidity, need for reintervention, and recurrence rates.

Again, the role of PC deserves further study and perhaps should only be reserved for patients who are not candidates for LC.

The major focus of the Consensus Conference was the difficult cholecystectomy. Operation in this group of patients is associated with the need for conversion to open operation and the highest risk of BDI. For example, a recent prospective multicentre study from Belgium found that 11.4 per cent of patients required conversion and, in this group, there were biliary complications in 13.7 per cent.

The known risk factors that portend a complicated operation include those criteria defined by Grade II of the Tokyo Guidelines: symptoms of greater than 72 to 96 hours, a WBC greater than 18,000/mm3, and/or a palpable or gangrenous gallbladder. However, it has also been shown that severe pathology may be encountered in the absence of such findings.

The Society of American Gastrointestinal and Endoscopic Surgeons (SAGES) has developed a six step Safe Cholecystectomy Program that includes: 1) achieving the critical view of safety (CVS), 2) recognising aberrant anatomy, 3) performing an intra-operative time out before clipping or cutting ductal structures, 4) liberal use of intraoperative cholangiogram (IOC), 5) having bail-out options, and 6) asking for help in difficult cases.

Most critical is to achieve the CVS, which is defined by three criteria: 1) the hepatocystic triangle is cleared of fat and fibrous tissue, 2) the lower one third of the gallbladder is separated from the liver to expose the cystic plate, and 3) two and only two structures should be seen entering the gallbladder. When the CVS is not achieved, there is a danger of BDI; however, there seems to be some misunderstanding of the criteria among surgeons. For example, in one recent study from the Netherlands, when surgical videos of cases with complications were reviewed in detail, although operative notes indicated that the CVS was achieved in 80 per cent, video review suggested that it was achieved in only 10.8 per cent.

If the inflammation is so significant that further dissection is deemed inappropriate, there are other options. IOC can be pursued to delineate the biliary anatomy; the use of infrared fluorescence is being evaluated in this setting. If this does not sufficiently define the anatomy, conversion to an open procedure can be pursued. Thoughtful consideration is needed to judge if the exposure of an open approach will significantly facilitate the dissection.

All surgeons should be familiar with bailout options when the CVS cannot be achieved. Although removing the gallbladder from the top down has been employed, this may also be associated with significant risk. If only the dome of the GB can be safely exposed, operative cholecystostomy may be pursued. If the hepatocystic triangle cannot be safely dissected, the surgeon can pursue a subtotal fenestrating cholecystectomy, leaving the posterior wall on the liver. At least 2cm of GB neck is preserved and any impacted stones can be removed. The neck can be either left open (fenestrating) or oversewn (reconstituting). A drain is left in the gallbladder fossa.

The surgical treatment of AC is complex and nuanced. Astute clinical judgment is required to make subtle decisions regarding both the type of surgical intervention and the timing of that intervention.

The surgeon who commits to a LC should be aware of the various techniques and options for abandoning the original procedure. SAGES has recently developed a set of Safe Cholecystectomy Web-Based Educational Modules that should become a resource not only for surgeons in training but for all practitioners caring for patients with AC. The final recommendations from the Consensus Conference should be a significant addition to our armamentarium.