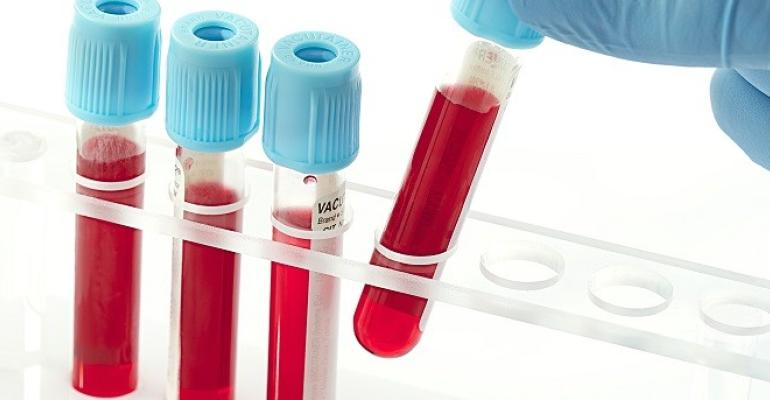 Autoantibody testing is a cornerstone in the diagnosis of the rare autoimmune disease systemic sclerosis (SSc).

SSc is characterised by a heterogeneous group of autoantibodies directed against various antigenic targets. Some of the antibodies occur frequently, while others are very rare. A large proportion of sera from SSc patients show an isolated reaction with just one antigen. Therefore, comprehensive multiparametric analysis of different autoantibodies is essential to minimise diagnostic gaps and increase the serological detection rate for SSc. As different autoantibodies are associated with different organ manifestations, autoantibody detection can also aid prognosis.

SSc, also known as scleroderma, is an autoimmune connective tissue disease which occurs mainly in middle adulthood. Approximately 2 to 50 out of 100,000 people suffer from SSc worldwide. Early symptoms of SSc are shortening of the lingual frenum and Raynaud’s syndrome, followed by oedema of the hands and feet. The skin becomes stiff, atropic, waxy and thin. The hands become deformed (claw hand) with highly tapered finger ends (Madonna fingers), and the face becomes rigid and mask-like. In later stages, callosity of the inner organs, particularly the digestive tract, lungs, heart and kidneys occurs.

SSc is divided into different subsets. In limited cutaneous SSc, skin involvement is limited to the distal extremities. In the diffuse cutaneous SSc, the symptoms are diffusely distributed over the trunk, the proximal extremities and the face. A third subset without skin involvement is also known. The so-called CREST syndrome of SSc manifests with calcinosis, Raynaud’s syndrome, esophageal dysfunction, sclerodactyly (thin, pale, thickened and hairless skin on the fingers) and teleangiectasis (persistent pathological dilation of superficial skin vessels).

Diagnosis of SSc is made according to criteria established by the American College of Rheumatology (ACR) and the European League Against Rheumatism (EULAR). However, clinical diagnosis can be difficult, especially in the early stages and in patients with the limited form of the disease. Currently known specific autoantibodies can be found in over 95% of patients with SSc. Autoantibody diagnostics facilitate early diagnosis of SSc and its differentiation from other collagenoses such as systemic lupus erythematosus, polymyositis, Sharp syndrome and Sjögren’s syndrome. The autoantibody specificities also provide an indication of the SSc subtype and serve as a tool for disease monitoring and prognosis.

Autoantibodies in SSc are directed predominantly against components of the cell nucleus. The target antigens include DNA topoisomerase 1 (Scl-70), centromere proteins (CENP A and B), RNA polymerase III (Rp 11 and RP155), PM-Scl complex proteins (PM-Scl100 and PM-Scl75), fibrillarin, as well as the rarer target antigens NOR (nucleolus organising region) 90, Th/To and Ku.

Autoantibody determination can be useful for predicting the disease outcome and organ involvement. In a recent study, five major autoantibody clusters with specific clinical and serological associations were defined in patients with SSc, namely centromere, strong RNA polymerase III, weak RNA polymerase, Scl-70, and other autoantibodies. The separation of anti-RNA polymerase III into two clusters based on the intensity of the reaction is a new aspect and may reflect different temporal stages of SSc disease. In further studies, significant associations have been found between anti-Scl70 and interstitial lung disease, anti-RNA polymerase III and renal crisis, anti-Th/To and pulmonary hypertension, and anti-U1 RNP and pulmonary arterial hypertension. Autoantibodies against Scl70, RNA polymerase III and U1 RNP are, moreover, associated with significantly reduced survival compared to anti-centromere antibodies. Thus, sub-classification and disease stratification using autoantibodies may have clinical utility, particularly in early disease.

Furthermore, a frequent co-existence of various rheumatoid disease-associated antibodies, including CENP A, CENP B and Scl-70, with antibodies characteristic for primary biliary cirrhosis has been observed, emphasising the importance of considering both of these diseases during serological diagnostics.

Autoantibodies in SSc are screened by indirect immunofluorescence test (IIFT) on HEp-2 cells and primate liver and confirmed by monospecific tests. In IIFT, SSc-associated autoantibodies give rise to various fluorescence patterns, for example nucleolar (eg. anti-Scl-70, anti-PM-Scl100, anti-PM-Scl75, anti-RP11, anti-RP155, anti-Th/To, anti-NOR90, anti-fibrillarin), centromere (anti-CENP A and anti-CENP B) or speckled (e.g. anti-Ku). Some typical patterns are shown in Figure 1.

Multiplex immunoblots are highly suitable for confirming antibody specificities, as many different antigens can be included on the test strips and analysed in parallel. In particular, line blots fitted with individual membrane chips allow antigens with widely different properties to be combined on one test strip. A dedicated immunoblot for SSc, the EUROLINE Systemic Sclerosis (Nucleoli) Profile (Figure 2), allows confirmation of 12 SSc-associated autoantibodies simultaneously. In particular, it allows the differentiation of antibodies that show a nucleolar pattern in IIFT. The antigens contained in the profile are Scl-70, CENP A, CENP B, RNA polymerase III subunits RP11 and RP155, fibrillarin, NOR-90, Th/To, PM-Scl100, PM-Scl75, Ku and PDGFR (platelet derived growth factor receptor). Ro-52 is also included to provide additional diagnostic information, although Ro-52 antibodies are not specific for SSc.

In a published clinical study, sera from 129 patients with clinically characterised SSc (diffuse and limited form), 142 disease controls (myositis, systemic lupus erythematosus, rheumatoid arthritis) and 60 healthy blood donors were investigated with the EUROLINE profile (Table 1). In 85% of the SSc sera, antibodies against at least one of the 12 relevant SSc antigens were detected. The prevalences ranged from 65% for anti-Scl-70 to 1% for the very rare parameter anti-PDGFR. Specificities for the individual antigens were at least 98%. In further published studies using large panels of SSc patients and control subjects, the overall autoantibody positivity rates in SSc patients using the immunoblot amounted to between 76% and 89%, with varying prevalences for the individual autoantibodies depending on the cohort. The specificities for all parameters were very high (93% to 100%).

The panel of 129 SSc sera and 142 control sera described above was also investigated by IIFT on HEp-2 cells. 99% of the SSc sera displayed an IIFT positive reaction, showing the patterns nucleolar (97 sera), centromere (12 sera), overlap nucleolar/centromere (2 sera) or others (17 sera). The EUROLINE confirmed 100% of the sera with centromere pattern and 93% of the sera with nucleolar pattern, amounting to an overall confirmation rate of 94% for the SSc monospecific patterns. Of the controls only 17 showed a nucleolar pattern in IIFT, with only three of these demonstrating typical SSc antibodies. These three positive sera originated from patients with myositis, which might indicate an overlap syndrome in these individuals.

The immunoblot for systemic sclerosis described here can be processed manually or fully automatically, for example, using the EUROBlotOne (Figure 3). This device provides complete automation of all steps, from sample data entry to report release. Up to 44 strips can be incubated per run, and it is possible to combine the systemic sclerosis profile with other immunoblot profiles in a single run. Preanalytical errors, due to wrong positioning of samples, are avoided thanks to the integrated barcode scanner. Moreover, the device automatically takes pictures of the strips with the integrated camera, and evaluates, interprets and archives them with the user-friendly EUROLineScan software.

The identification of novel SSc-specific autoantibodies has greatly enhanced the serological diagnosis of SSc. Alongside the major markers anti-Scl70, anti-centromere and anti-RNA polymerase III, many rarer autoantibodies now contribute to diagnostics. There is, moreover, a growing body of evidence that SSc antibodies can be used as predictors of disease outcome and organ involvement. Immunoblots such as the EUROLINE are an ideal method for multiparametric, monospecific determination of antibody specificities. They are fast, easy to interpret, and fully automatable, and can be used in any routine diagnostic laboratory. As further novel autoantibodies become identified, immunoblots can be easily supplemented with additional parameters. The SSc immunoblot profile is also useful for studies into the clinical utility of comprehensive autoantibody testing in SSc. It is anticipated that ongoing research will help to elucidate the associations between specific antibodies and particular disease courses and outcomes, and increase the understanding of the pathogenicity of this challenging disease.

**Analysed in 129 sera from SSc patients and 202 control sera