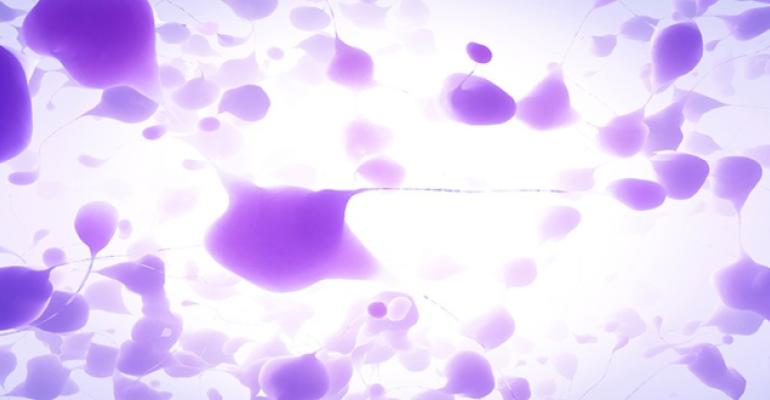 Autoimmune encephalitis typically manifests with seizures and neuropsychiatric symptoms and may occur with or without cancer. The most frequent and best characterised type is anti-N-methyl-D-aspartate (NMDA) receptor encephalitis. The target antigen of the autoantibodies is the membrane-spanning channel subunit NR1 of the NMDA receptor. Symptoms of anti-NMDA receptor encephalitis encompass psychosis, catatonia, seizures, dyskinesia, autonomic dysfunction and decreased consciousness. It is most common in young adults, and approximately 40-50 per cent of patients present with a neoplasm, predominantly ovarian teratoma.

Other forms of autoimmune encephalitis are linked to autoantibodies against a multitude of further antigens. LGI1 and CASPR2 are specific target antigens of autoantibodies formerly thought to be directed against voltage-gated potassium channels. Anti-LGI1 reactivity is tightly associated with limbic encephalitis, with tumours occurring in 5-10 per cent of cases. Anti-CASPR2 autoantibodies have been described in patients with mostly encephalitis and/or peripheral nerve dysfunction (Morvan’s syndrome). 20-50 per cent of cases are linked to thymoma. Anti-DPPX encephalitis is a multifocal neurological disorder with prominent hyperexcitability of the central nervous system and rare (<10 per cent) association with lymphoma. Autoimmune encephalitis with reactivity against GABAB receptors is characterised by very prominent seizures, memory loss and confusion. Neoplasms, especially small-cell lung carcinoma, occur in about half of patients. Patients with anti-AMPA receptor encephalitis commonly exhibit subacute confusion, memory deficits, seizures and sometimes dementia. 70 per cent of cases are paraneoplastic, affecting the lungs, thymus and breast.

There is evidence that autoantibodies in autoimmune encephalitis play a direct pathogenic role through antibody-driven inflammation and/or functional manipulation of the target antigen, which results in impairment of synaptic signal transduction. This is supported by the fact that these disorders can be effectively treated by immunotherapy.

The diagnosis of autoimmune encephalitis is based on clinical characteristics, magnetic resonance imaging, electroencephalography, cerebrospinal fluid (CSF) analysis and detection of anti-neuronal autoantibodies in CSF and/or serum. Infectious encephalitis and other autoimmune neurological disorders should be taken into account in differential diagnostics. Particularly in unexplained neurological cases, autoantibody screening can secure a diagnosis and may provide the first indication of a tumour. Broad antibody testing based on the most frequently targeted neuronal antigens helps to rapidly discriminate between different types of autoimmune encephalitis with overlapping pathology, especially limbic encephalitis.

Autoantibodies against neuronal cell-surface antigens can be detected in serum or CSF by indirect immunofluorescence assays (IFA) using neuronal tissue sections, recombinant cells (Figure 1) and cultured primary neuronal cells. Since the target structures of the antibodies are conformation-dependent and fragile, solid-phase detection methods such as ELISA or immunoblot are unsuitable. Positive reactions on the neuronal tissue and cultured cells give rise to characteristic staining patterns depending on the in situ localisation of the native antigens. These substrates are especially useful for detecting autoantibodies that have not yet been characterised.

Recombinant cell-based IFAs provide efficient monospecific detection of defined autoantibodies. The recombinant cells heterologously express individual antigens on their surface, generally at a higher concentration per cell than in the native tissue, which allows a more sensitive detection of the corresponding autoantibodies. To achieve maximal diagnostic performance, only the relevant epitopes of the autoantigens are expressed.

With biochip mosaic technology, different substrates can be variably combined in one reaction field and incubated in parallel (Figure 2). Thus, a comprehensive antibody profile can be established with one test run. The IFA Autoimmune Encephalitis Mosaic 6, for instance, provides six recombinant cell substrates for simultaneous detection of antibodies against NMDA receptors, AMPA 1/2 receptors, GABAB receptors, LGI1, CASPR2 and DPPX.

In a cohort of 2716 serum/CSF samples, anti-neuronal IgG were found in 108 samples. Anti-NMDA receptor antibodies were by far the most prevalent finding (38 per cent), followed by anti-LGI1 (11 per cent) and anti-CASPR2 (11 per cent). In total, 67 per cent of the seropositive samples exhibited autoantibodies against neuronal surface antigens, while autoantibodies against classic paraneoplastic (intracellular) antibodies were detected in only 35 per cent. In 31 per cent of the seropositive cases, the antibody finding did not correspond to the parameter requested in the analysis order but was discovered only on account of the broad multiparametric screening.

This effect was even stronger in a cohort of 16,741 samples. 2353 samples were positive for at least one neuronal parameter; about half of them (52 per cent) revealed antibodies of class IgG. Approximately 11 per cent of the positive samples were sent in with a monospecific request. Of these cases, 56 per cent revealed the requested antibody and in 5 per cent a second antibody was found, while 49 per cent were positive for a parameter other than that requested. Thus, the increase in findings due to multiparametric testing amounted to 87 per cent. Again, NMDA receptor was the most frequently targeted antigen of IgG antibodies (26 per cent). IgG antibodies against neuronal surface antigens were found around twice as frequently as those against classic intracellular antigens.

The high prevalence of autoantibodies against cell surface antigens found in these studies underscores the rising relevance of this novel class of neuronal antigens for autoimmune encephalitis diagnostics.

Due to the ever-increasing number of neuronal autoantibodies that need to be analysed, a platform for automated immunofluorescence evaluation was developed to accelerate the analytical process and reduce personnel workload. The EUROPattern system consists of an automated microscope, which takes focused images of the fluorescence patterns for display on the computer screen, and sophisticated classification software based on deep-learning AI for positive/negative interpretation of the recorded immunofluorescence signals. The cell nuclei are counter-stained with propidium iodide, which verifies correct performance of the incubation. This is important for negative samples, which do not show a fluorescence signal.

The high-quality of the automatically acquired images was demonstrated by comparing on-screen appraisal with visual microscopy using 753 incubations of numerous serum samples. The two evaluation strategies revealed a concordance of 100 per cent with respect to positive/negative discrimination (excluding samples with ambiguous signals at the microscope to avoid inter-reader deviations). The computer-aided immunofluorescence microscopy thus considerably facilitates the microscopic analysis, supporting laboratory personnel in the rapid issuance of diagnostic findings.

The discovery in recent years of a myriad of new autoimmune encephalitis syndromes has led to a paradigm shift in the diagnosis and treatment of these neuropsychiatric disorders. Previously, they were frequently misclassified as psychiatric disorders, dementia or epilepsy, with patients often consigned to lifelong intensive psychiatric care. Nowadays, they can be effectively treated with immunotherapy and, if cancer is present, with tumour-directed therapy. Timely treatment often leads to substantial and even full recovery. Multiparametric tests based on recombinant cell technology enable fast detection of the disease-associated autoantibodies.

The assays encompass well-known parameters as well as autoantibodies that few clinicians are aware of, ensuring a broad-ranging analysis. Due to the rapid rate of discovery of new target autoantigens and syndromes, it is anticipated that the spectrum of autoantibody assays will continue to expand in the near future. This would enable the diagnostic net to be cast wider still, enabling more patients to benefit from life-saving immunotherapy.

The discovery in recent years of a myriad of new autoimmune encephalitis syndromes has led to a paradigm shift in the diagnosis and treatment of these neuropsychiatric disorders.