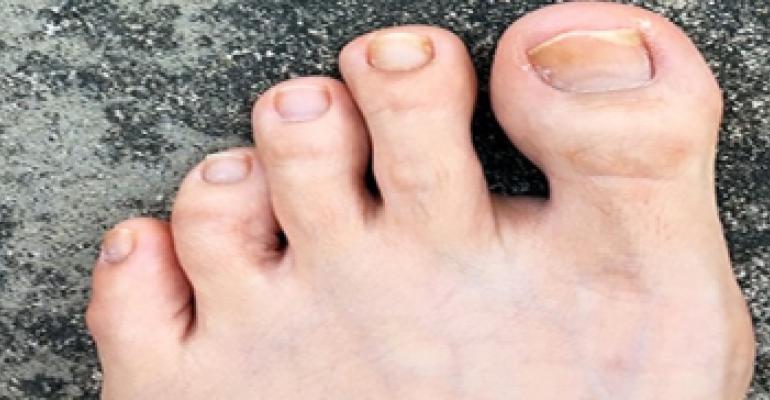 Itchy, scaly, painful, unseemly and all-round unpleasant, fungal skin and nail infections are a scourge of our times. They are caused predominantly by dermatophytes, but also by yeasts and moulds. The pathogens spread easily via contaminated surfaces such as clothes, shoes, showers, floors and carpets, as well as by direct contact. Fungal skin and nail infections are characteristically long-lasting, recurring and difficult to cure. Identification of the causative pathogen is essential for selecting the most effective treatment. The classical diagnostic methods of pathogen culturing and microscopy are, however, time-consuming and unreliable. Direct pathogen detection by PCR-based methods provides fast and accurate identification of the causative agent, enabling prompt implementation of targeted therapy. Multiplex testing by DNA microarray provides exceptionally high diagnostic efficiency, allowing as many as 56 dermatomycosis pathogens to be determined in a single reaction.

Fungal infections of the skin, hair and nails, known as dermatomycoses, are extremely common, affecting around 20- 25 per cent of the population worldwide. Elderly people and immunocompromised patients are especially at risk. Infections caused exclusively by dermatophytes are referred to as dermatophytoses or tinea. Tinea pedis, which occurs on the soles of the feet and between the toes, is the most common dermatophyte infection, followed by tinea unguium, which affects the nails. Rarer forms can occur on the neck, back, trunk, arms, legs, groin, hands, scalp, face or beard hair. Nail infections caused by dermatophytes or yeasts/moulds are called onychomycoses and are typically accompanied by deformation of the nail.

Dermatophytes encompass fungi of the genera Trichophyton, Epidermophyton, Nannizzia, Paraphyton, Lophophyton, Microsporum and Arthroderma. Dermatophytes are classified according to the major host and infection source into anthropophilic (human source), zoophilic (animal source) or geophilic (soil source) species. Around 70 per cent of human dermatophyte infections are caused by anthropophilic species. Trichophyton rubrum, in particular, is the most frequent cause of fungal skin infections worldwide. Zoophilic dermatophytes are commonly transmitted by pets, which are often asymptomatic. These infections can cause severe inflammatory reactions in humans. Geophilic infections are less frequent in humans and typically occur in outdoor workers.

Human pathogenic yeasts and moulds include Candida spec., Scopulariopsis brevicaulis, Fusarium spec. and Aspergillus fumigatus. Moulds and yeasts cause opportunistic infections, benefitting from damage to the skin or nail caused by an existing dermatophyte. In immunocompromised individuals, local fungal infections may develop into systemic mycosis.

Dermatomycoses can be difficult to diagnose clinically, as they are heterogeneous and may resemble other dermatoses such as eczema, psoriasis, erysipelas, or autoimmune diseases such as Lichen ruber planus. In addition, diagnosis can be hampered by bacterial infections of the injured skin, ongoing treatments with corticosteroid-containing compounds or secondary contact allergies.

Nevertheless, accurate identification of the culpable pathogen is a prerequisite for selecting the most suitable medication, since different antifungal drugs have different activity spectra. Selecting effective treatment at the outset is especially important given the oftentimes long duration of therapy. In the case of nail infections, for example, successful treatment can take many months.

Classical laboratory diagnostics for dermatomycoses encompass detection of the pathogen by culture and/or morphological identification by microscopy. However, this procedure requires time, patience and expertise. Successful pathogen culturing, for example, can take up to six weeks. The procedure is also prone to uncertain or incorrect findings. In mixed infections, slowly growing species may be overgrown or overlooked. Furthermore, antifungal therapy started before the sampling can hinder the culture.

A faster and more reliable method for identification of the causative agent is PCR-based detection by DNA microarray, which identifies the pathogens directly by means of their genetic material. Nucleic acid-based detection can close the diagnostic gap of microscopy/culture and increase the sensitivity and specificity of mycological diagnostics. Molecular genetic detection also significantly shortens the time to diagnosis from weeks to hours.

The novel EUROArray Dermatomycosis provides direct detection and differentiation of the most important dermatomycosis pathogens in one test. The assay simultaneously detects 50 dermatophyte species and provides species identification for 23 of these as well as for six yeasts and moulds (Table 1). The direct detection ensures accurate results, even in cases of difficult-to-culture dermatophytes, mixed infections or dermatomycoses that have already been treated.

The EUROArray procedure is extremely easy to perform (Figure 1) and takes just three hours. Ready-to-use reagents and the small number of pipetting steps ensure a minimal work load. The analysis is performed on DNA isolated from patient sample material, such as skin scales, nail shavings or hair stubs. Defined gene sections of the pathogens are first amplified by multiplex polymerase chain reaction (PCR) and at the same time fluorescently labelled. The PCR products are then hybridised to complementary probes in the microarray system and detected using a special scanner (Figure 2). The evaluation and interpretation of results as well as the archiving of data are fully automated and thus objective. No in-depth knowledge of molecular biology is required to perform the test. The swift and unambiguous test result enables prompt therapeutic intervention and may also provide a pointer to the source of infection, in the case of zoophilic infections often a pet.

An evaluation study was performed using 409 clinical samples. The EUROArray Dermatomycosis yielded a good agreement with the pre-characterisation. In many cases, additional pathogens that were not included in the pre-characterisation were detected. The additional findings were confirmed by further independent tests or sequencing. Thus, the study confirmed the reliability and the broad detection capabilities of the EUROArray.

The incidence of fungal skin and nail infections is increasing worldwide and is expected to continue to rise. Growth in vulnerable populations, such as the elderly and those with chronic diseases like diabetes mellitus, may fuel the upsurge further. Furthermore, the geographic distribution of dermatophytes species and the epidemiology of infections is changing due to factors such as migration, travel, drug therapy, lifestyle and socioeconomic conditions. This necessitates a broad diagnostic analysis in cases of infection. Molecular genetic methods such as the EUROArray Dermatomycosis are ideally suited for this application, providing rapid, comprehensive and reliable results. This enables timely, pathogen-specific treatment, increasing the chances of curing the fungal disease.