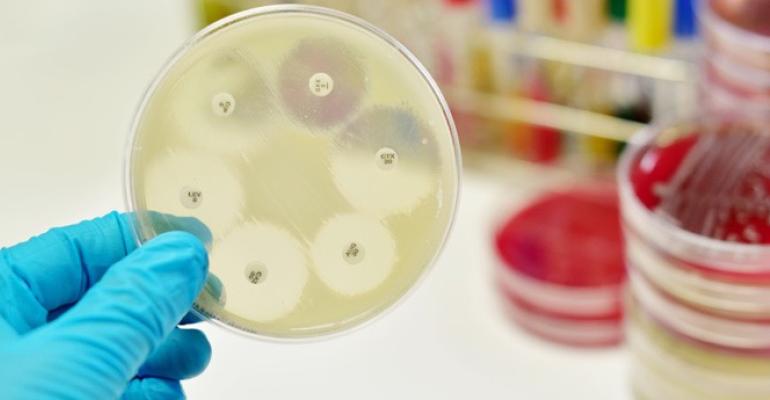 Antimicrobial resistance in Gram-negative bacteria, particularly among Enterobacteriaceae family and non-fermenters, has become a leading cause of morbidity and mortality and a serious public health concern worldwide.

Antimicrobial resistance may be intrinsically expressed by chromosomal genes or acquired through plasmids. Plasmid-mediated resistance is more worrisome because resistance genes can spread to different bacteria through horizontal gene transfer. Different mechanisms of antimicrobial resistance in Gram-negative bacteria have been identified including target modification, efflux pumps, hydrolyzing enzymes (e.g. β-lactamases). The commonest mechanism of resistance in Gram-negative bacteria is the presence of β-lactamases that hydrolyze the β-lactam ring present in penicillins, β-lactam and β-lactamase inhibitor combinations, cephalosporins, monobactam (e.g. aztreonam) and carbapenems. β-lactamases constitute a heterogeneous group of enzymes and they are classified according to two general schemes: the Ambler molecular classification (classes A through D) based on protein homology and the Bush–Jacoby–Medeiros classification (groups 1 through 4) based on functional properties of enzymes. β-lactamases of class A, C, and D are serine β-lactamases whereas class B enzymes are metallo-β-lactamases (MBL).

AmpC β-lactamases are mainly present on the bacterial chromosome although some species like E. coli and K. pneumoniae can acquire AmpC on plasmids. AmpC enzymes hydrolyze penicillins, cephalosporins including cephamycins and aztreonam. Unlike ESBLs, AmpC enzymes are not inhibited by β-lactamase inhibitors but can be inhibited by cloxacillin. Modifications in regulatory mechanisms in some bacteria can result in AmpC overexpression and therapy failure. This occurs in SPICE organisms (Serratia marcescens, Pseudomonas aeruginosa, Indole-positive Proteeae (Morganella morganii & Providencia), Citrobacter freundii and Enterobacter spp.

Carbapenem resistance can be due to efflux pumps (e.g. in P. aeruginosa), loss of Porins leading to impermeability to carbapenem and more commonly production of carbapenemases. Carbapenemases can be classified into group A (e.g. Klebsiella pneumoniae carbapenemase (KPC)), group B (e.g. New Delhi MBL (NDM)) and group D (e.g. oxacillinase (OXA)). Group A enzymes hydrolyze all β-lactams and are usually plasmid- mediated. KPC is the most common carbapenemase in USA, it is usually expressed at high levels, and plasmids carrying KPC enzymes also carry other resistance genes (e.g. ESBL). NDM is the most common MBL worldwide and it is common in India and Pakistan. The first report of NDM was in 2008 in a Swedish patient who was hospitalized in India. MBLs require zinc for activity and are inhibited in vitro by zinc chelator (e.g. EDTA). OXA enzymes hydrolyze carbapenems and extended-spectrum cephalosporins at low levels. The predominant carbapenemases in UAE are OXA-48 and NDM-1.

Recently, due to the increased spread of multidrug resistant bacteria especially carbapenem-resistant isolates, colistin (polymyxin E) has been increasingly used. Colistin is a lipopeptide that was used in the 1960s and 1970s for Gram-negative bacteria but it was abandoned due to renal and neurologic toxicity and the availability of other agents. Colistin targets the cell membrane through electrostatic interaction with lipopolysaccharides (LPS) leading to displacement of the divalent cations (Mg2+ and Ca2+), cytoplasmic leakage and cell death. Intrinsic resistance to colistin is present in Morganella morganii, Brucella, Proteus, Serratia, and Burkholderia. Acquired resistance in E. coli, Acinetobacter, K. pneumoniae and P. aeruginosa is mostly due to modification of LPS target. Recently, resistance to colistin due to plasmid mediated mcr-1gene has been described.

There are many laboratory tests available to detect β-lactamases. If the laboratory is using the current Clinical & Laboratory Standards Institute (CLSI) guidelines for cephalosporins and carbapenems, there is no need to use these tests except for infection control purposes when an outbreak is suspected or for epidemiology and research purposes to understand the mechanisms of emerging resistance. However, the microbiologist maybe faced with certain situations or discrepancies where confirmation of resistance is necessary. If the laboratory is using the old CLSI guidelines, these tests are necessary to confirm or exclude resistance. For ESBLs, testing is accomplished by disc diffusion, E-test, and broth microdilution and the comparison of minimum inhibitory concentrations (MICs) or zone of inhibition with and without β-lactamase inhibitor (e.g. clavulanic acid). These tests are standardized for E. coli, Klebsiella spp. and P. mirabilis, yet, ESBLs occur in other species. In addition, ESBLs are not always detected if multiple resistance mechanisms are present producing false negative ESBL test. For AmpC, there is no FDA-approved assays available in the US but some laboratories use AmpC tests for suspected plasmid-mediated AmpC resistance based on inhibition by cloxacillin. For bacteria carrying chromosomal AmpC, accurate identification of species (e.g. Enterobacter cloace, Citrobacter freundii, Serratia marcescens) is adequate to assume that these bacteria are AmpC producers. Detection of carbapenemase activity in a clinical isolate in the laboratory is a difficult but an elevated carbapenem MIC should raise suspicion that a carbapenemase is present. Several methods including modified Hodge test, Carba NP test, and molecular assays can be used.

Antimicrobial susceptibility tests for colistin in the US are not FDA- cleared and all available tests are research use only (RUO). Testing colistin is difficult because it is a large molecule and its diffusion in the agar is slow. Several studies have reported unacceptable categorical agreement for both disc diffusion and E-test (very major error rates up to 32% for disc diffusion and up to 53% for E-test). In addition, colistin adsorbs to plastic microtiter plates yielding falsely high MICs due to loss of colistin to the surface. One study found that only 7.5% of colistin is available in broth and the rest is all adsorbed in the wells of a polystyrene broth microdilution plate. The use of disc diffusion, agar dilution, E-test is unreliable and only broth microdilution is recommended at this time as recommended by the joint CLSI-EUCAST polymyxin breakpoints working group.

Treatment and prevention of MDR infections

The number of antimicrobial agents reliably effective against multidrug resistant bacteria is very limited (5). Carbapenems can be used to treat infections caused by organisms carrying AmpC and ESBL enzymes. Cefepime is a poor inducer of AmpC and may have a role in treating organisms producing AmpC (5). Treatment modalities for multidrug resistant Gram-negative bacteria especially carbapenem-resistant isolates include polymyxins (Colistin, polymyxin B), tigecycline, minocycline, aminoglycosides, fosfomycin, ceftazidime-avibactam (Avycaz) ™, ceftolozane-tazobactam (Zerbaxa) ™, and a combination of antimicrobial agents.

From the laboratory perspective, there are many strategies the laboratory can implement to combat resistance. Susceptibilities should be performed only when it is required. Selective reporting of antibiotics can improve the clinical relevance of test reports and minimize the selection of multidrug resistant strains. Broad-spectrum agents are reported only when the isolate is resistant to narrower-spectrum agents. In addition, each laboratory should develop a protocol to deal with MDR bacteria including testing additional agents in-house or at a reference lab. Screening for multidrug resistant strains especially carbapenem resistant Enterobacteriaceae (CRE) from stool using chromogenic agars or molecular methods will help to isolate colonized patients and prevent spread of resistant bacteria.