The antibacterial effects of gold nanoparticles against E. coli strains 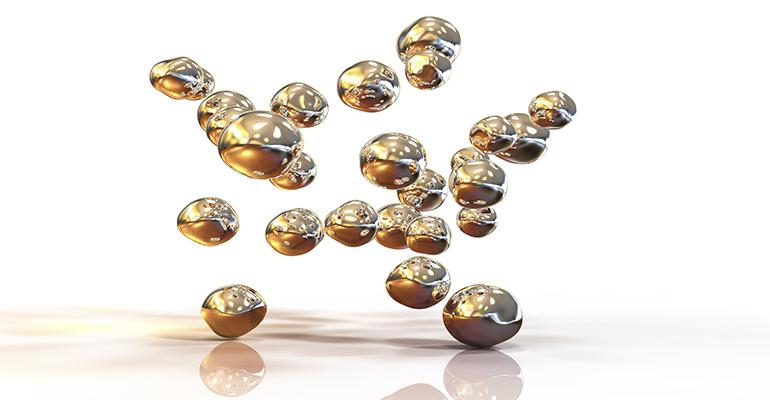 A look at isolated from clinical samples in Qassim region, Saudi Arabia.

There is a range of pathogenic bacteria worldwide that can affect all age groups of both sexes. In the worst cases, certain bacterial infections may cause severe morbidity and mortality in human population. Moreover, some pathogenic bacteria have acquired the genes to become multidrug-resistant (MDR) strains due to an extensive use of antimicrobials. The MDR bacterial strains have posed serious challenges to the scientists and clinicians in the last few decades. There is a dire need either to find new antimicrobials or replace or modify the currently available antimicrobials to combat drug-resistant bacterial infections.

Recent advances in the field of Nanotechnology have provided new hopes for patients and practitioners to overcome the problem of drug resistance. The effectiveness of nanoparticles (NPs) depends on the interaction between the NPs and the microorganisms. The NPs have extensively been studied for acting as antimicrobials to fight against drug-resistant bacteria. The NPs can be defined as intentionally produced particles that have characteristics dimension from 1 to 100 nm and have properties that are not shared by non-nanoscale particles with the same chemical composition.

The synthesis and biomedical application of noble metal NPs, especially gold nanoparticles (AuNPs) is a promising field of research and has garnered the attention of vast groups of researchers. The tailored ability to ensure cellular uptake with controlled release of the drug to specific cell target, significant stability, bio-inertness with non-toxicity of gold have made AuNPs a popular candidate for biomedical applications such as biosensors, drug delivery for cancer chemotherapy and radiotherapy.

There are many characteristics making NPs strong alternatives for traditional antibiotic drugs. Firstly, they have a high surface area to volume ratio, which can increase the contact area with target organisms. Additionally, they may be synthesised from polymers, lipids, and metals. Furthermore, a multitude of chemical structures, such as fullerenes and metal oxides, allow for a diverse set of chemical functionalities.

Nanomaterials have become a promising and efficient drug candidate that can replace conventional materials with most applications in the field of science and technology. Commonly used nanoparticles are formulated with silver, gold and zinc, each with different properties and spectrum activities. AuNPs are widely used in enormous biological applications mainly in medical and gene therapy and biosensors for diagnosis. AuNPs are easy to be prepared by co-precipitation approach and may have lower toxicity compared to other metallic nanomaterials such as silver nanoparticles (AgNPs). The emergence of antibiotic-resistant bacteria and their emphasis on healthcare costs, has encouraged researchers to innovate new approaches to develop more effective antimicrobial agents to overcome the bacterial resistance and reduce their cost. The present study was aimed to assess the effectiveness and mechanism of the antimicrobial activity of AuNPs as a novel therapeutic formulation against E. coli strains.

The macrodilution method was used to establish the minimum inhibitory concentrations (MICs) of AuNPs. The antibacterial effect of AuNPs against E. coli strains was evaluated at the MICs of the NPs. In brief, two-fold serial dilutions (200–0.39 μg/ml) was prepared. Each well was consequently filled with 100 μl of inoculum. To evaluate the antibacterial action of AuNPs on bacterial growth, the MICs for all isolates were determined after 24 hours using the optical density (OD600) of the bacterial culture solutions. The final cell concentrations of bacterial inoculants were 106–107 CFU/ml.

To determine MBC, 50 μl aliquot from the tubes not showing any turbidity was transferred onto Tryptone Soya Agar (TSA) plates not supplemented with AuNPs and then incubated at 37-degree C for 24 hours. All plates were examined before and after incubation for the presence or absence of bacterial growth. The number of surviving organisms was determined by viability counts. The lowest concentration of NPs that inhibited the growth of ≥99.99 per cent of E. coli was defined as MBC. All of the experiments were duplicated on two different days.

Aqueous colloidal AuNPs suspension (0.05 mg/ml) was purchased from PlasmaChem GmbH (Berlin, Germany) to use in this study. Chemical reduction method was used for synthesis of vwAuNPs. This was carried out by a reduction of 10-mM tetrachloroauric acid (HAuCl4) using sodium citrate (Sigma-Aldrich, USA). Briefly, an aqueous solution of HAuCl4.3H2O was boiled under reflux while being stirred. Changing the colour of the solution from yellow to deep red after adding 10-ml trisodium citrate (1 per cent) indicated the formation of spherical AuNPs. The solution was refluxed for 20 min, then left to cool at 25°C. Afterward, the solution was filtered through a 0.45-μm acetate filter and stored at 4°C. Morphology of the synthesised NPs was examined by transmission electron microscopy (Oberkochen, Germany). NPs size distribution was measured according to the dynamic light scattering using a Malvern Zeta sizer Nano ZS device (Sysmex, the Netherlands). 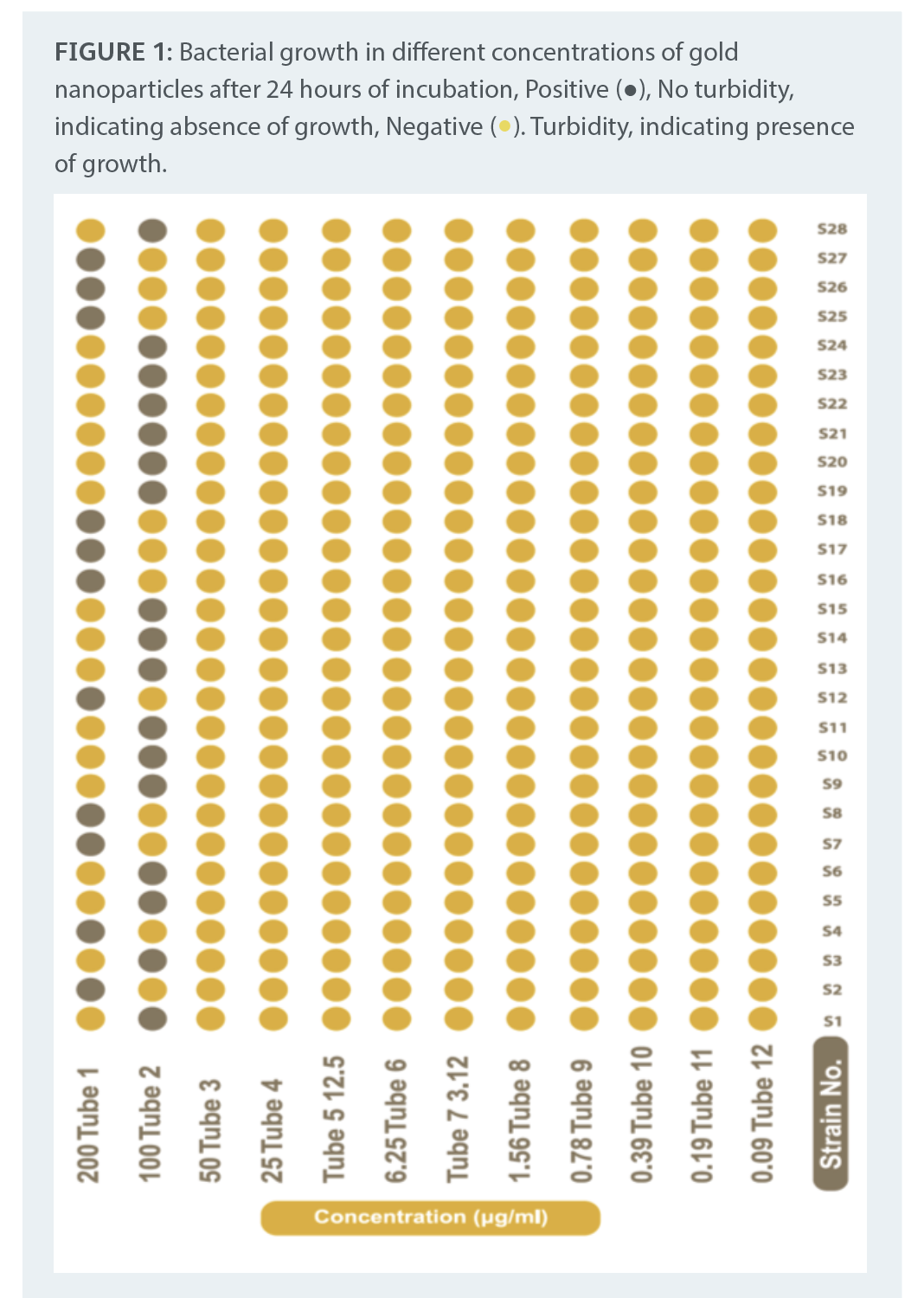 As shown in Figure 1, doses of 100 and 200 µg/ml were found to be effective. The results showed that the majority of E. coli strains (60 per cent) were sensitive to the dose of 100 µg/ml, whereas remaining 40 per cent showed resistance to the same concentration. The dose of 200 µg/ml was found to be effective against the E. coli strains that were resistant to a dose of 100 µg/ml as shown in Figure 2. 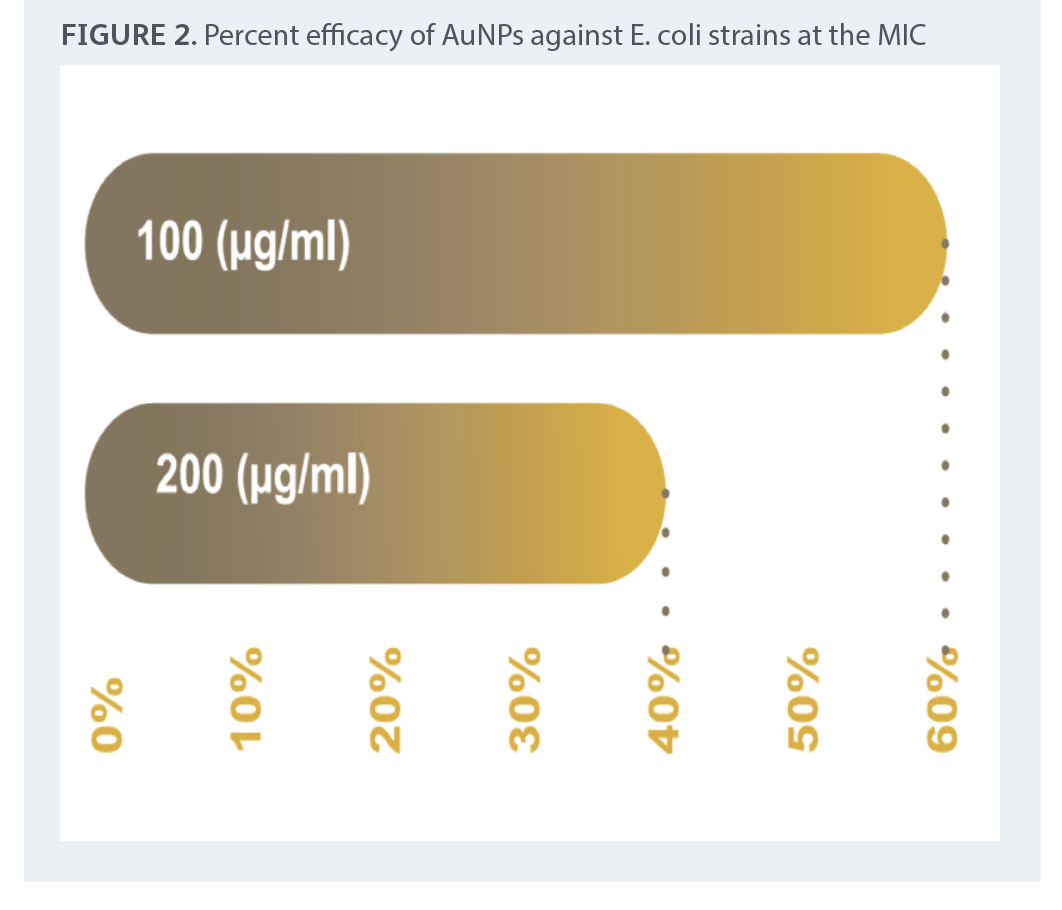 The suspension from the tubes of 100 and 200 µg/ml was inoculated in nutrient agar plate and incubated for 24 hours. No growth of bacteria was observed that confirmed as bactericidal concentration. The presence or absence of turbidity was denoted as + or – respectively. As bacterial growth at different concentrations of AuNPs was assessed after 24 hours, the MIC and MBC of E. coli was observed maximum for a concentration of 100 µg/ml, and 200 µg/ml, indicating that it has both bacteriostatic and bactericidal activity (Figure 1).

Statistical analysis of MBC for different concentrations when assessed showed significant inhibition of growth for both 100 µg/ml and 200 µg/ml when compared to 0.09 to 50 µg/ml, however, the optimum MIC was obtained with 100 µg/ml. Therefore, these results confirm that the MIC and MBC of AuNPs can be effective at dilution of 100 µg/ml.

This study investigated the antimicrobial activity of AuNPs against E. coli isolated strains. The current study determined the MIC value by observing the turbidity to determine bacterial growth inhibition in the liquid. The results suggested that the sensitivity of E. coli strains against AuNPs in concentration 100 µg/ml was higher than 200 µg/ml at MIC.

NPs can be used either by combining it with various antimicrobials or capping material of NPs. Coating or capping of NPs often ensures an increase in biocompatibility and reduction of toxicity. The combination of NPs with other antimicrobials can help to reduce the intrinsic toxicity of NPs for mammalian cells. Therefore, the synthesis of AuNPs can be performed either by chemicals or biosynthesis techniques.

This study suggests that AuNPs showed strong antibacterial effect against E. coli strains. It can also be assumed that AuNPs have created immense interest in the field of medicine as an antimicrobial agent. The assessment of the potential toxicity of AuNPs remains a major concern before their clinical applications. However, further studies are required to determine the activities of AgNPs against the same E. coli isolates.