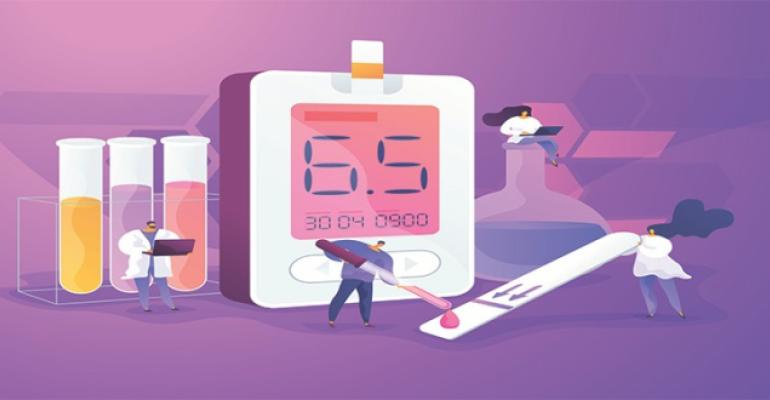 Diabetes mellitus type I is an autoimmune disease in which the beta cells of the pancreatic cells of Langerhans are selectively destroyed, reducing the body’s ability to produce insulin and thus regulate blood sugar levels. The disease mainly occurs in childhood or at the start of puberty, but may also occur in adults. The prevalence of diabetes mellitus type I, for example in Central Europe, amounts to approximately 0.4 per cent. Latent autoimmune diabetes in adults (LADA) is a special form of the disease, which occurs from around age 25. It is characterised by a mild course, which slowly progresses into an insulin-dependent stage. LADA is frequently first confused with the non-autoimmune-mediated diabetes mellitus type II due to its slow progression. In order to make a clear diagnosis, the detection of disease-specific autoantibodies is indispensable in both diabetes mellitus type I and LADA.

The destruction of beta cells starts already years before the actual manifestation of diabetes mellitus type I, which occurs only when around 80 per cent of beta cells are destroyed. The production of disease-associated autoantibodies also starts in the early phase of the disease. The titer first rises rapidly and in the later stage decreases somewhat. Thus, autoantibodies represent important early markers, indicating the disease even before it manifests. Moreover, they have a prognostic value and can indicate if a person, for example a first-degree relative of a patient, has an increased risk of diabetes mellitus type I. The disease is treated with exogenous insulin, and an earlier start of therapy is associated with a better prognosis and less secondary organ damage. The destruction of the beta cells cannot, however, be stopped and patients remain insulin-dependent.

ICA: Encompass all antibodies which are directed against the endocrine cells of the pancreas. They have a prevalence of 80 to 90 per cent in diabetes mellitus type I. The target antigens of ICA are predominalty glutamic acid decarboxylase, tyrosine phosphatase and zinc transporter 8.

GADA: Have a prevalence of 60 to 80 per cent in newly diagnosed patients. They often occur in very high concentrations and persist for a long time. GADA or ICA are suitable for delimitation of LADA from diabetes mellitus type II in young adults.

IA2A: Have a prevalence of 50 to 80 per cent in newly diagnosed patients and often occur together with other disease-specific antibodies. They have a high diagnostic sensitivity in children and young adults in terms of rapid progression to manifest type I diabetes mellitus.

ZnT8A: Are present in 60 to 80 per cent of patients at the beginning of the disease and are found in 26 per cent of patients in whom no GADA, IA2A or IAA are detected. They have a high prevalence in children, starting from three years of age and reaching a peak in late adolescence. ZnT8A have a high prognostic value, since they seem to correlate well with the mass of the beta cells. This means that in children of diabetes mellitus type I patients, the risk of developing the disease is higher if ZnT8A are present. Positivity for ZnT8A appears to reflect a more aggressive disease process both before and after diagnosis. In LADA patients, ZnT8A might indicate that the patient is in transition from a non-insulin dependent to an insulin-dependent stage.

IAA: Are present in the majority of paediatric patients. They are only relevant in adults if they occur together with other specific antibodies, since their formation may be induced by exogenous insulin and they may be present in healthy individuals.

Generally, the risk of suffering from diabetes mellitus type I increases with the number of specific autoantibodies in serum. A strong affinity and high titers of these antibodies further increase the probability. Age also plays a decisive role in the estimation of the disease risk. The earlier the disease-associated autoantibodies occur, the higher the 10 year-risk of falling ill is and the faster the progression to manifest diabetes mellitus type I.

The risk of suffering from diabetes mellitus type I increases with the number of specific autoantibodies in serum.

The diagnostic procedure in diabetes mellitus type I depends strongly on the patient’s age. Experts recommend investigating GADA first in both paediatric and adult patients. If no GADA are detected, children under the age of 10 years should be tested for IAA and ZnT8A, and children over 10 years for IA2A and ZnT8A. Adult patients who do not exhibit GADA should be investigated for ICA. Since some patients exhibit only one type of autoantibody, a comprehensive investigation of autoantibodies is always recommended.

ELISAs for detection of GADA, IA2A and ZnT8A

Formerly, the radioimmunoassay (RIA) was the gold standard for the determination of GADA and IA2A. Nowadays, reliable ELISA test systems are available, which provide comparable performance to RIA. They are, moreover, simple to perform and do not require the use of radioactive reagents. Studies with clinically characterised patient sera have verified the excellent agreement of the EUROIMMUN Anti-GAD ELISA (97 per cent) and Anti-IA2 ELISA (98 per cent) with the corresponding RIAs.

ZnT8A can be determined using a newly developed ELISA. In a study with sera from 50 diabetes mellitus type I patients, 76 per cent of the sera were determined as positive in the Anti-Zinc Transporter 8 ELISA. 94 per cent of samples were positive in at least one of the three ELISAs. In a further study, 869 sera from diabetes patients, healthy blood donors and patients with other autoimmune diseases were analysed with the Anti-Zinc Transporter 8 ELISA (Table 1). ZnT8A were detected in 72 per cent of paediatric and 54 per cent of adult diabetes mellitus type I patients, as well as in 31 per cent of LADA patients. Study subjects with other autoimmune diseases, in contrast, exhibited ZnT8A only in isolated cases.

RIA for detection of IAA

Detection of IAA is only reliable by RIA, since only in the liquid phase are all relevant epitopes of the antigen freely accessible for the heterogenic IAA. In a study encompassing 50 patients with newly manifest diabetes mellitus type I aged from 9 to 35 years and 100 sera from healthy blood donors, the Anti-Insulin RIA yielded a very good specificity of 95 per cent at a sensitivity of 46 per cent.

IFA for detection of ICA

The indirect immunofluorescence assay (IFA) using the substrate pancreas enables a comprehensive investigation of all ICA. In the commercial IFA from EUROIMMUN, frozen sections of primate pancreas are used for the antibody detection. ICA react with the endocrine part of the pancreas tissue and manifest with a smooth to granular cytoplasmic fluorescence of all islet cells.

A range of autoantibodies serve as diagnostic and predictive biomarkers for diabetes mellitus type I and LADA, in particular for differentiating these autoimmune disease forms from non-autoimmune diabetes mellitus type II. The discovery of ZnT8 as a major target of autoantibodies has significantly enhanced the diagnostic repertoire. ZnT8A occur with a similar prevalence to classic diabetes-associated autoantibodies. In addition, they may overlap or occur independently of other biomarkers. Thus, the determination of ZnT8A complements the detection of GADA, IAA, IA2A and ICA, and enables more patients to be identified, especially in the early stages of disease.