HomeTechnologyImmersive MediaXR in the ER: Dr Rafael Grossmann, the Tony Stark of the operating theatre
Recent
Can healthcare robots answer physical and emotional needs?
May 27, 2022
The deadly case of the Therac-25: a warning for medical AI
May 26, 2022
Innovation vital in the evolution of clinical trials
May 25, 2022
Emerging cases of monkeypox investigated
May 24, 2022
POLL
The essentials of personalised healthcare in low-budget regions
May 23, 2022
The Florida International Medical Expo gears up for landmark 2022 event
May 23, 2022
AI, big data, VR and blockchain expected to power patient-centric applications
May 20, 2022
Dubai Hospital launches ‘Da Vinci Xi’ surgical robot to perform robotic-assisted minimally invasive surgeries
May 19, 2022

XR in the ER: Dr Rafael Grossmann, the Tony Stark of the operating theatre 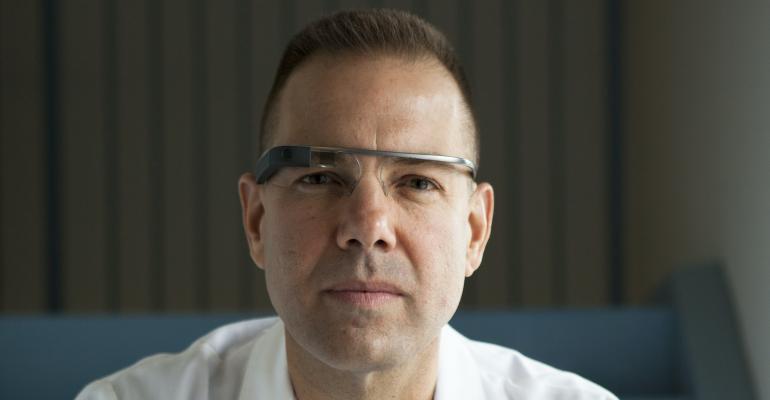 It’s not every day you come across a physician who peppers his conversation with sci-fi references from Minority Report to Iron Man, but Dr Rafael Grossmann is different. The Venezuela-born surgeon, who practices in Maine, is welcoming the future with open arms, albeit virtual arms, as a proud advocate for the adoption of VR, AR and XR in healthcare.

Dr Grossmann, it’s fair to say, is keen on shiny tech. A Google Glass Explorer, prolific social media author from YouTube to Twitter, and TEDx speaker, he is no stranger to pursuing all things new. He recently expounded on the latest healthtech at Omnia Health Live, when he revealed eye-opening uses of gadgets in the operating theatre and beyond.

But there is one revolution in particular that excites him the most, however – one that had its beginnings in black and white on the humble computer screen from three decades ago.

Speaking to Omnia Health Insights, he explained that spatial computing will have a transformative impact in healthcare.

In his words, spatial computing represents the fourth era of computing that began with MS-DOS (familiar to any reader over 40) before evolving to the desktop of the Mac and Windows era before evolving again to today’s touchscreen.

With spatial computing, any action is performed in the air (the device is less important). Digital content is superimposed on the real world, and the end user may interact with it in what is an Extended Reality environment, or XR.

As an example, Dr Grossmann offered the following scenario: a patient or colleague is brought into the same physical space by a healthcare worker – wherever they are. Their actual distance apart is 1,000 miles, but in a virtual context they are in the same room. The patient is a real-time avatar, generated via a head-mounted device. The two seamlessly move and interact in real-time, making possible anything from conference calls to assisting in surgery.

In perhaps a more relatable example, he added “Think Tony Stark. It’s exactly how it is in the movie [Iron Man].”

Dr Grossmann believes that spatial computing, when paired with AI algorithms that allow the means to collect, interact with and analyse data, will solve many problems.

A surprising problem that this can help ease is inequality.

The physician pointed to how the pandemic has affected different cultural groups, owing to comorbidities. “If you’re Afro-American, Hispanic or Native American, your chances of dying are much higher. This is unacceptable.”

Healthcare requires fixing so that it works for every socio-economic status and background, believes Dr Grossmann, and this will require efforts from top to bottom in what is a complex task. “It’s a team sport,” he acknowledged.

However, he also suggested that tech could play an important role. XR could allow an experienced surgeon located in an advanced economy, for example, to provide expert guidance remotely to a team operating in a poorer country.

It’s for this reason that innovation “has to happen”. While the economic opportunity to innovate is worth billions, there is a strong altruistic incentive to help the two-thirds of the world who do not have access to the basics the remainder take for granted.

Dr Grossmann was the first doctor to use Google Glass during live surgery. While Google Glass, launched in 2013, ultimately failed to gain public traction, it nonetheless remains popular in the healthcare community and continues to grow in the background.

Today, every tech giant is talking innovation in healthcare.

Microsoft and Phillips have developed an AR concept for image-guided minimally invasive surgeries. Their alliance will provide an “incredible platform” for HoloLens2 application in healthcare.

Better known for its smartphones and wearables, Apple is now talking about AI glasses with AR lenses, showing that it is also thinking aggressively about healthcare.

Despite these advances, there remain barriers to be overcome.

“The main problem is regulators and hospital administrations not welcoming true innovation; they are fearful of liabilities, fines and reprimands,” Dr Grossmann said, adding that the floodgates will need opening for innovation to flourish.

This is despite public approval and acceptance of technology – patients use tech in everyday life from purchasing airline tickets to doing their grocery shopping.

He recognises that there is potential for abuse – in AI in particular “we’ve seen it in movies throughout the decades” but stressed that the problem isn’t the technology itself.

Dr Grossmann remains optimistic, however, that barriers will be overcome. Many countries are realising that innovation is the way to go: the UK, Spain and the Netherlands, for example, have shown leadership; Singapore too, and in Abu Dhabi and Dubai in the Middle East, while there is change happening in Africa and Latin America.

But perhaps the biggest force for change is the pandemic. The physician highlighted how COVID-19 has accelerated progress, and offered telemedicine, wearables that track disease and genomics as examples of areas that have seen rapid developments in recent months.