HomeManagementA lens on sleep apnoea
Recent
Can healthcare robots answer physical and emotional needs?
May 27, 2022
The deadly case of the Therac-25: a warning for medical AI
May 26, 2022
Innovation vital in the evolution of clinical trials
May 25, 2022
Emerging cases of monkeypox investigated
May 24, 2022
POLL
The essentials of personalised healthcare in low-budget regions
May 23, 2022
The Florida International Medical Expo gears up for landmark 2022 event
May 23, 2022
AI, big data, VR and blockchain expected to power patient-centric applications
May 20, 2022
Dubai Hospital launches ‘Da Vinci Xi’ surgical robot to perform robotic-assisted minimally invasive surgeries
May 19, 2022

A lens on sleep apnoea 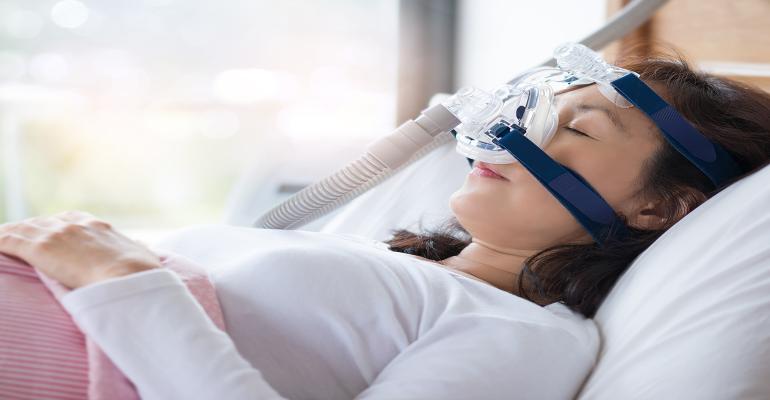 Woman using CPAP machine
Ahead of World Sleep Day on March 13, we take a look at the risk factors associated with sleep apnoea.

According to the 5th annual Philip sleep survey titled “Wake Up Call: Global Sleep Satisfaction Trends”, which surveyed more than 13,000 adults in 13 countries to capture attitudes, sleep apnoea and the importance of Continuous positive airway pressure (CPAP) therapy is not well understood – even among those who have the condition.

Overall, the survey highlighted that in 2020, people are significantly less likely to be actively doing something to improve their sleep compared to results from the Philips’ 2019 World Sleep Day Report.

While watching TV (2019: 37 per cent vs. 2020: 33 per cent – the most common strategy people currently use to improve their sleep) is used by fewer people now compared to 2019, the decline in use is most notable for reading, listening to soothing music, using sunrise alarm clock and meditation.

“The decrease in people taking action to improve sleep is alarming, especially when it is clear people around the world deeply value sleep. Sleep deficit impacts people both mentally and physically, so we need to educate people on available sleep resources and empower them with the confidence that their efforts will pay off,” said Mark Aloia, PhD, Global Lead for Behavior Change, Sleep & Respiratory Care at Philips.

According to the National Sleep Foundation, obstructive sleep apnoea can occur when the upper airway becomes blocked repeatedly during sleep, reducing or completely stopping airflow.

There have been a number of studies highlighting that there is growing evidence that the condition affects glucose metabolism and promotes insulin resistance, leading to type 2 diabetes, and weight gain. However, studies also found that treating sleep apnoea might actually improve glycaemic control and long-term complications from diabetes.

Moreover, the connection between sleep apnoea and heart disease has also been evolving rapidly. Sleep apnoea has been linked with heart arrhythmias, atrial fibrillation, heart failure, heart attacks, and strokes, most likely because it is associated with high blood pressure. Whether sleep apnoea actually causes heart disease is still unclear, however, it does increase the chance of developing hypertension in the future significantly.

A study in the journal of the American Heart Association discovered that moderate to severe obstructive sleep apnoea (OSA) can cause changes in the heart’s shape and function, similar to the effects of hypertension. But six months after CPAP treatment, the abnormalities returned to near-normal measurements in patients.