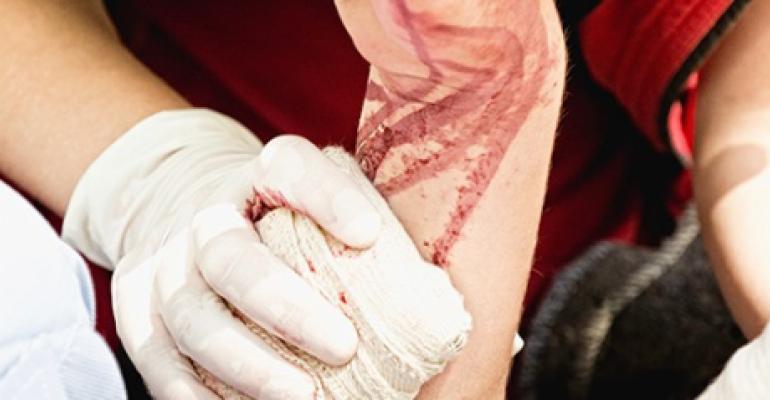 One can no longer rely on goodwill and good intentions to manage mass casualties in a disaster situation. As in all other branches of medicine, disaster medicine must rely on a solid and evidence based foundation. Disasters (natural or man-made) and the number of individuals affected by them are yearly increasing. The objectives of disaster medicine are to prevent, reduce and mitigate the effects of disasters on the health of affected populations, to restore health conditions to the pre-disaster situation and to protect or re-establish health services and facilities.

Emergency versus Disaster Medicine
Health professionals must recognise that disasters are qualitatively different (rather than merely quantitatively different) from smaller events such as encountered in daily emergency medicine practice. In contrast with these lesser events, disasters place community systems under extreme stress and responders face new and different demands. Thus, disasters may generate a whole host of problems for which routine emergency procedures are not well adapted. The management of the health effects of a disaster is one of the most difficult tasks that must be performed by health professionals by doing ‘the best for the most’ versus ‘the best for everyone’. It requires special knowledge and professional skill to provide healthcare of quality in a primitive or hostile environment (e.g. terror attacks) and an ability to innovate and organise a disaster medical response system.

Are we handling disasters as effectively as we think we should be?
Several studies on medical disaster preparedness and lessons learned from recent disasters indicate a lack of education and training of the different parties involved in the medical management of disasters. Furthermore, health professionals and researchers from a broad spectrum of disciplines and specialties contribute to the knowledge base of disaster medicine science. Although multidisciplinarity can be a strength, it can also be a hindrance due to the lack of mutual understanding between people from different backgrounds. Moreover, there is large variation in the organisation of the disaster medical response in different countries and even within countries. Without a standardised framework for describing and reporting the features that impact on disaster medical response, it is very difficult to compare results of disaster medical response evaluations and even more difficult to identify best practice. This lack of a common language also hinders intra- and interdisciplinary collaborations, appropriate training and the relationship between researcher and practitioner.

Looking for evidence: Standardised data collection by Emergency Medical Teams
Disaster medical planning and response are only as good as the assumptions on which they are based. Many of these assumptions are incorrect and not based on systematically collected evidence. Our current knowledge of disaster medical management relies on expert opinions and individual descriptive reports, which often lack scientific rigour. Databases available for disaster medical research are underdeveloped, incomplete and inaccurate. Disaster medical response principles, concepts, structures and processes are not evidence-based. Moreover, research that analyses the effectiveness and efficiency of disaster interventions on the health outcomes of disaster survivors is very scarce. One of the reasons is the fact that randomised clinical trials have been described as unable to accommodate the complexity that characterises disaster medical response, and are impossible or ethically unacceptable – or both – to be carried out in disaster situations. Nevertheless, there is an increasing awareness among the disaster medicine community of the need to collect empirical data derived from formal research or systematic investigations, to allow researchers to determine the effectiveness of disaster medical response interventions and the impact of the response on patient outcomes. This collection of consistent data should lead, over time, to the development of a consensus on, and validation of evidence-based processes and outcome indicators. In a field of research where data will always be difficult to obtain – as most healthcare providers prioritise the provision of care to a large number of victims over the documentation of medical and operational management – the lack of universally accepted standards for collecting and reporting data will hinder or make it impossible to compare research findings in different types of disasters or across different types of interventions.

Based on the empirical data collected by (enhanced) type 1 emergency medical teams (EMT) in five different humanitarian emergencies, our research group was able to define pathology patterns this type of EMT will face, and propose recommendations with respect to the staff composition and medical logistics of these EMTs over time.

Injury patterns may change according to the type of disaster or humanitarian emergency, but patterns of communicable and non-communicable diseases do not differ strongly across different types of disasters.

Differences in pathology patterns can further be determined by a number of other factors such as time of EMT deployment after the occurrence of the event, the type of EMT deployed and the environmental context of the affected area. Injuries will be most prominent during the first two weeks after a sudden onset disaster. Different types of EMTs will attract different types of pathology: major trauma will be directed to type 2 and 3 field hospitals and undamaged hospitals which will be transformed into trauma centres, with the result that more non-injured patients are referred to type 1 EMTs.  Last categories of patients who will present to EMTs are pregnant women, women in labour, new-borns, and those with health problems for which an appropriate treatment is locally unavailable or too costly.

The results of these studies indicate that the staff and resource composition of EMTs should be flexible and dynamic in time, in order to meet the changing needs of disaster victims in the subsequent phases of the humanitarian response. There is an early role for emergency surgeons, anaesthesiologists, intensivists, emergency nurses and their ancillary staff to be deployed in type 2 and 3 field hospitals, but patients needing urgent surgery or follow-up will present to type 1 field hospitals as well. There is an early role in all types of EMTs for emergency physicians, paediatricians, gynaecologists, midwives, psychologists, pharmacists, and interpreters. Public health specialists have an important role in preventing the emergence of infectious diseases. EMTs deploying after the first week of the onset of the emergency should operate as a “subsidiary” emergency department and be prepared to treat mostly infectious diseases, non-communicable disorders and minor surgery. EMTs can scale-up in the second week with internists, reconstruction surgery and rehabilitation teams, maternal health specialists, and psychologists. As many patients will require long-term follow-up, it is essential to include local staff in the EMTs as soon as possible. The actual Interagency Emergency Health Kits should be adapted to the specific needs of disaster victims in the different phases of the response, by adding medications and supplies for respiratory, digestive, ophthalmic and non-communicable diseases, as well as rehabilitation materials, and paediatric formulas of essential medicines.

The template for uniform recording and reporting medical data developed in the five humanitarian emergencies, based on empirical data collected during the response to different disasters, should be the start to initiate an Utstein-style consensus process including all stakeholders, in order to define a final set of medical data to be recorded and reported in disaster situations. The use of such a template will make a substantial contribution to better establish the effectiveness of medical interventions on the outcome of disasters patients. Implementing Utstein-style templates is always challenging. Whether the template will have the desired impact of improving the science of disaster medicine can only be answered by the future use and justification of the template.

Simulation and modelling in disaster medicine research
Uniform medical data gathering and the identification of the key elements of the response will facilitate the development of conceptual models. These models are describing a comprehensive approach to managing the medical assets during an acute response and to coordinating across the various response tiers. Models and simulation, if used correctly, can support experimental research on disaster response management. Simulations using disaster medical response models can provide evidence-based data for an optimal use of resources when applying specific response interventions or procedures and allow comparisons of the efficiency of response interventions or procedures in order to define best practice, taking into account the contextual factors of the affected area and the specific disaster scenario.

Conclusion
Education and training in disaster medicine and management can only be done when a solid and standardised scientific basis is present. The cornerstone for a solid scientific basis is the collection of reliable experimental (medical) data.  A lot of work has been done already but there are still challenges for the future. Our ultimate goal will be doing ‘the best for the most’.