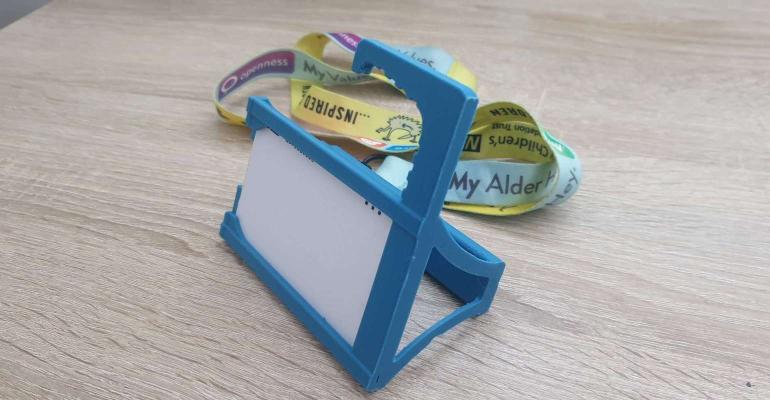 The anti-microbial Distancer will allow hospital staff to pass through doors safely.

Wars tend to accelerate technological innovation, and it appears that the current COVID-19 pandemic – described by officials worldwide as a warlike situation - is no different.

The outbreak is not only fast-tracking the development of new medicines and vaccines; it’s rapidly forcing the adoption of new tools and technologies generally. As one viral meme in social media put it, it has done more than any CEO or CTO in advancing workplace digital transformation.

A clear example of the wave of innovation coming out of the crisis can be seen in the huge response to worldwide PPE shortages, from masks to ventilators, particularly in the area of 3D printing.

Joining the many individuals and businesses helping to alleviate the current crisis is UK-based 3D LifePrints (3DLP), which provides 3D printed medical devices, products and services to organisations that include the NHS, private hospitals, research institutions and universities, medical device manufactures and medical training centres.

The company has been tasked by the NHS to work on a variety of devices for the COVID-19 outbreak in the UK. The first to be rolled out is a simple but effective anti-microbial handheld device designed and manufactured by 3DLP with Alder Hey NHS Foundation Trust to reduce the risk of contamination when moving through buildings.

Research shows that the coronavirus survives on hard surfaces for up to 72 hours – including plastic and steel doors. COVID-19 is also, of course, highly infective, with 2.5 people infected by each carrier.

This evidently presents a problem to healthcare workers who are on the move within a hospital environment: a 2012 study on hospital door handle design revealed that ward staff entered and exited a gate 120 times within a two and half hour period.

As the following video demonstrates, the Distancer allows the medical professional safe passage through a door through hooking on to the handle.

It also works for doors that require pushing: the healthcare worker simply inserts their ID card into the device and raises it for scanning, before pushing the door open using the flat surface of the Distancer.

The device works for lifts, too: according to research the number of bacteria present on a lift button is almost 40 times higher than on a public toilet seat. While innovative solutions worldwide have included using toothpicks to push lift buttons, the Distancer makes it easier to tap through its hook.

As for carrying the device, the Distancer conveniently hangs off a belt or waist via a keyring or lanyard. The device is light, weighing no more than 50g and made from polypropylene, a durable material that commonly used surfactants/detergents will not deteriorate.

3D LifePrints revealed that 4,000 Distancers will be going out to the NHS next week. Furthermore, the company has pledged to donate one device to a UK NHS staff member for every unit purchased by industry.

There has also been strong global interest, especially in the Middle East where enquiries have come in from Dubai, Oman and Saudi Arabia, and there is potential for other buildings that include factories, warehouses, airports, conference centres, prisons, police stations and care homes.

Manufacturing the Distancer isn’t without its challenges. Founder and CTO Paul Fotheringham mentioned that the reason they have quickly moved from 3D printing to injection moulding techniques is due to the cost, speed of manufacturing and variable quality from desktop 3D printers. With injection moulding, up to 10,000 per week can be made lower cost.

Other 3D printed products in development include an adapter to fit a Costco snorkel mask to a standard NHS viral fitter, about to undergo testing in NHS England, and an oxygen splitter currently in the early stages of testing.

The device will triple capacity at hospital oxygen outlets during times of increased demand for patients requiring oxygen. Features will include three barbed hoses for oxygen tubing, instead of the usual one; a nipple adapter designed to help evenly distribute the flow of oxygen between the three hoses; and barbed hoses to secure oxygen tubing. It also connects to standard UK oxygen ports.